Twenty years ago, if you had offered me the opportunity to fire a gun, I would have recoiled in absolute horror and read you the riot act.  I can still recite my standard factoids from memory, although I’m too lazy now to string them together into a coherent narrative:

Guns are dangerous.  They kill people.  America is the most violent country in the world and it has the most guns.  Look at England and Sweden.  They have far fewer murders per capita than America does (although I have to add here, in 2009, that when I was making this argument England did not have gun laws as stringent as it does now, and it even then had a very violent knife culture).  Most gun crimes occur in a moment of passion because there is a gun in the home and someone grabs it.  Children can’t stay away from guns and will invariably kill each other or themselves if they stumble across one.  And the Second Amendment is all about militias, and individuals who have guns aren’t forming formal militias, they just want guns to kill people and innocent animals.

I think I got everything there from the old standard riff.

As with everything else in the last decade, my views about guns have changed substantially.  I understand now that, even if all of the above facts are true, the bigger issues surrounding the right to bear arms transcend — and offset — those concerns.  The biggest principle is that the right to bear arms is the hallmark of a free society.  It is no coincidence that, as my pro-gun brother-in-law always said, one of the first things the Nazis did when they came into power was legislate against private gun ownership.  Even though they understood that a rag tag band of citizens is probably of little immediate effect against a well-trained, well-supplied standing army, they also understood that armed, enraged citizens can engage in guerilla warfare that is sufficient to hold off even a formal military — especially if the military is comprised of troops who share the values of the armed citizenry.

I also know now that, even if the government isn’t my enemy, it may not be at my side when the chips are down.  This won’t be from a lack of will, but from a lack of ability.  Hurricane Katrina vividly illustrated that, with the best will in the world, when all systems break down, law enforcement cannot be at your side and you are on your own.  In New Orleans, those communities that could boast that they were protected by Smith & Wesson were left alone by marauding bands of looters.  The same will hold true if, God forbid, there is another major terrorist attack against the United States, paralyzing government, and its ability to protect us both from terrorists and from fellow-citizens taking advantage of the anarchy that can occur in the wake of a major terrorist attack.

I’ve also figured out over the years that similarly situated societies that have outlawed guns have much higher gun crime than those that haven’t.  Look at Texas and California for a nice side-by-side comparison of gun policies.  The former is much more gun friendly, but traditionally has had a lower per capita crime rate than California. And we all know that, when cities such as London or Washington, D.C., enacted complete gun bans, violent crime sky-rocketed.  These comparisons seem to lend complete credence to the saying that, “When guns are outlawed, only outlaws will have guns.”

It’s an interesting question, though, whether banning guns really is a direct cause of the subsequent increase in crime.  Another one of my brothers-in-law, who is pro-gun, does not believe that there is a direct cause-and-effect relationship between crime and outlawing guns. He points out that, in Los Angeles, most of the gun crime involves gangs.  In those cases, both sides are armed.  The combatents are young men who are not at all deterred by the fact that the house or car they are targeting contains equally well-armed combatents.  In the tribal cultures they’ve created in the ghettoes, warfare is normative, and the other side’s weapons are not a deterrent.  This means that, for these young men, it is irrelevant whether a homeowner has arms.  They’ll break in anyway.  And they’ll shoot regardless.  Gun control or not, these guys shoot to kill.

Thinking about it, I believe my brother-in-law has a poi nt. Gun control laws alone are probably not the direct cause of an increase in crime.  But how about this:  Is it possible that the same democratic societies that voluntarily enact gun control laws (as opposed to totalitarian dictatorships that disarm their citizenry for power purposes) are societies that have already broken down at other levels?  When you look at cities or that have outlawed or severely limited access to guns, they are also cities or states that have embraced welfare, that are hostile to self-reliance and traditional Judeo-Christian morality, that are “soft on crime,” that oppose capital punishment, that have high rates of out-of-wedlock pregnancies, and that generally have fallen into moral disrepair.  Outlawing guns is part of a package deal of social decay — and social decay invariably brings with it rising crime rates.  In other words, gun rights are the canary in the coal mine, giving one a fairly good reading of a society’s level of freedom and morality, without actually having a direct causative effect on either one of those things.

All of which brings me back to the start of this post.  I mentioned that, in the old days, I would have reacted in horror to an offer to fire a gun.  On Thursday, however, when yet another brother-in-law (I seem to have a lot of them) offered to take me to a firing range to try out his revolver (357 Magnum) and his rifle (I have no idea what kind), I jumped at the chance.  Yesterday morning, therefore, saw me at the Angeles Shooting Range, just outside of L.A.

I have to admit to being quite intimidated.  I’ve never been next to a gun in my life (except for museum pieces, and those were behind glass), and suddenly I find myself surrounded by dozens and dozens of people armed to the teeth.  Even with hearing protecting, my ears were ringing.  I was instantly impressed, though, by how well-organized the shooting range was, and how respectful the customers were of the rules — which makes sense, since the rules were so obviously for everyone’s benefit.

My bro-in-law first had me fire the revolver.  I did exactly what he said:  After carefully loading the gun, I got into a balanced stance, held the gun in both hands. extended my arms, and looked down the sites to aim the gun.  My hands were shaking, but I took a deep breath, held it for a second, and fired.  I was surprised by the kick.  When I’m working on the bag at the dojo, and I punch it, the push-back I get from the bag is pretty much equivalent to the energy of the punch.  With the gun, though, a teeny movement of my finger caused the gun to rear up in my hands.  It was disconcerting, because it seemed to defy physics.  (And yes, I know that every time I get into a car, I defy physics, but that’s such an integral part of life I no longer think about it.)  Most magical of all, though, was the fact that a hole appeared in the piece of paper that was hanging some thirty or so feet away.  I ended up firing about 21 shots, and all of them hit the paper.  Here’s the result of my first ever attempt to fire a gun: 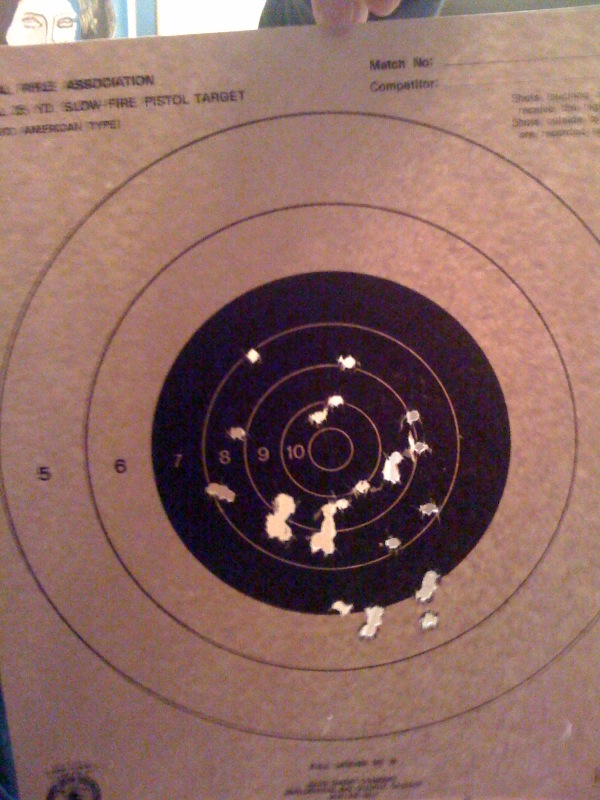 (My brother-in-law, by the way, hit the bulls eye on his target.)

After using up all the revolver ammo we bought, my brother-in-law and I headed over to the rifle range.  This was much more difficult for me.  The weapon felt awkward (which the revolver didn’t), I kept being worried that I’d manage to break my jaw with the recoil, and I couldn’t see the target very well.  Or rather, I could see the target but, because I couldn’t see whether I hit the target, I wasn’t able to correct my form from one shot to the next.  Here are the results of my first outing with a rifle: 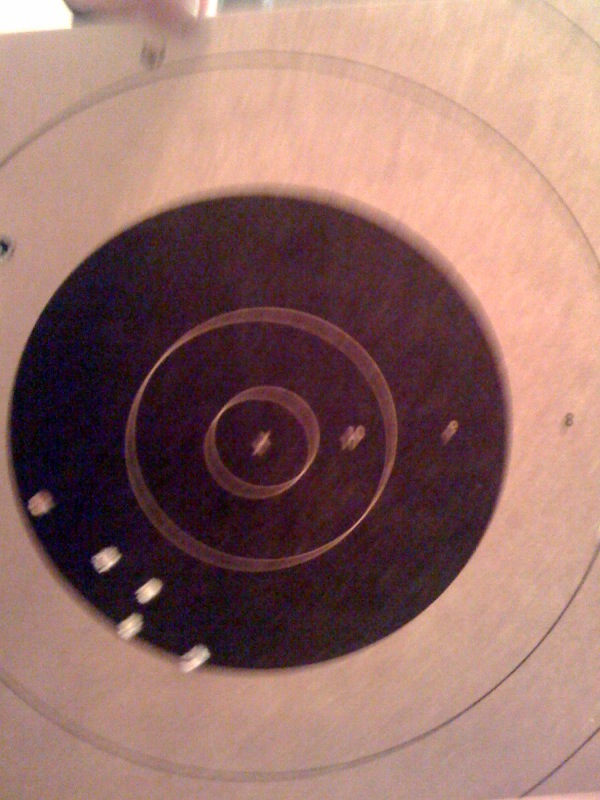 It’s a bad photo, so it doesn’t show that I hit the paper in the white area several times,but it still gives a pretty good idea of the difficulties I had with the rifle.  Still, I don’t regret firing it, and would certainly do so again.

As my long-time readers know, I’ve been talking since Hurricane Katrina about learning how to shoot.  Somehow, though, I couldn’t seem to get myself going, no doubt due to some lingering liberal procrastination, coupled with the fear of going alone to do something entirely different.  Now, though, thanks to my bro-in-law’s help, I’ve taken that first step, and will try again, with pleasure.  I enjoyed the experience a great deal.  Ialso came away with a much greater respect for the gun, both as a weapon, and as a source of sportsmanlike pleasure.