Usually when governments use misinformation, they use it to make themselves look good.  The Obama Administration gets points for originality, insofar as it’s been using disinformation and misinformation to make itself look arbitrary, unlawful, helpless and stupid.  Here’s jj’s great summary:

Okay, what do we have here:

1) There was a firefight.
2) There was no firefight.
3) Bin Laden was “resisting.”
4) Bin Laden wasn’t armed.  (Makes the concept of “resisting” interesting.)
[4.a) And the newest one: the SEALS thought bin Laden was reaching for a weapon.]
5) He used his wife as a shield.
6) His wife was killed too.
7) He didn’t use his wife as a shield.  She ran at a SEAL who shot her in the leg, but she’s fine.
8 ) Some other woman — the maid? — was used as a shield.  By somebody.  Downstairs.
9) That other woman — downstairs — was killed.
10) Maybe not.  She was killed unless she wasn’t — and who was she, anyway?
11) Bin Laden’s son was killed.
12) Unless it was some other guy.
13) Bin Laden’s daughter saw him get killed.  She’s undoubtedly traumatized, poor dear.
14) They were going to capture Bin Laden until the problem with the helicopter, which was:

A) It had mechanical trouble
B) It did a hard landing
C) It crashed
D) It clipped a wall with a tail rotor, effectively a crash

15.) They were never going to try to capture him; it was always a kill mission.
16.) No, it wasn’t.
17) The chopper blew up.
18) The SEALs blew it up.
19.) Panetta said yesterday the world needed proof and the photo would be released.
20.) Obama said today in an interview he taped with Steve Kroft for “60 Minutes” to be broadcast Sunday that it won’t be released.  It’s too gruesome, would offend Muslim sensibilities (something he worries about a lot — I personally do not give a warm fart on a wet Wednesday about Muslim sensibilities), and how would Americans feel if Muslims released pictures of dead Americans?
21.) Kroft — who’s not a total idiot — pointed out that ever since “Black Hawk Down” days, Muslims have been doing precisely that, filming American bodies being dragged through the streets, filming Daniel Pearl’s head being cut off, filming any and everything.
22) Obama gets pissed at CBS, the tape gets cleaned up, that question disappears. (Inside info.)
23.) We got a “treasure trove” of stuff from hard drives, etc.
24.) There were no phone lines, and no internet access at the “mansion,” they didn’t even have TV — what “treasure trove?”
25.) There is obviously in the pictures of the place a large satellite dish.  I guess they used it for making salads.
26.) And now, just today: apparently the idea was to capture him, but only if he was naked.  There was a suspicion he might be wearing a suicide bomber type explosive vest, or belt.  So if he’s not naked and you can’t see if he has a vest on or not – shoot him.

The idiot Carney — they actually managed to find someone who makes Gibbs look good — is currently twisting himself into knots trying to explain why the photograph that the whole world was expecting isn’t going to be released.  (Obviously the thing to do is get Trump on the case, he’ll force Obama to release it.)

The military did great, the administration — or whatever that bunch is, kind of like “The Little Rascals” — have managed to turn it into spaghetti.  The story has changed so many times in the course of a mere three days it’s a joke — the world would be better off if Panetta had left the little shitwit on the golf course.

UPDATE:  I’m hearing a lot from people who think “there’s something wrong here” — and certainly jj’s witty and wonderful summary shows that there is indeed something deeply wrong.  Here’s my take on the matter:

I have no doubt that OBL is dead.  I also have no doubt but that, for reasons known only to itself, the Obama Administration is making its best effort to confuse the story so badly that people will doubt this ultimate truth.

When people say “something is wrong here,” they’re sort of right.  The “here” in which the wrongness resides isn’t this specific news story.  Instead, it’s an overarching pathology that we’re talking about.

That is, the SEALS did what they did.  What’s driving everyone bonkers is that this administration is incapable of being straightforward.  Serpentine deceit is its MO, regardless of the topic, whether birth certificates, health care debates, or sanctioned assassinations.  Everything is wrapped in a web of lies and confusion because of the paranoia, personality disorders, narcissism, and sociopathy that walk the White House halls.

UPDATE II:  At Gateway Pundit (which gave me a link, so thank you very much), I learned that the video feed wasn’t working, so that the now iconic picture of Obama hiding in the back of the Situation Room while everyone stares at the monitor is — well, another mystery to add to jj’s list.

Over at Free Republic, though, someone has the right idea about that picture: 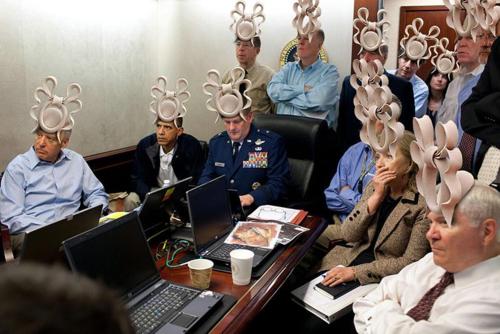 The Bookworm Turns : A Secret Conservative in Liberal Land,
available in e-format for $4.99 at Amazon or Smashwords.