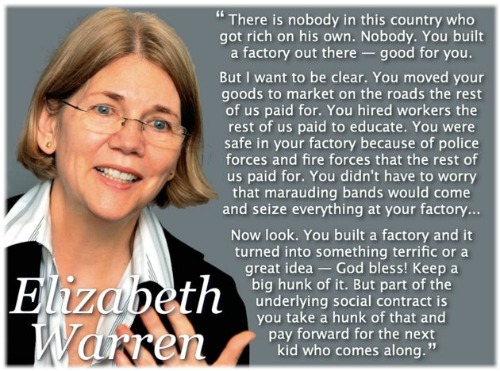 I woke up this morning to find that my Leftist friends literally plastered Facebook with the above poster.  (Since I grew up and still live in the Bay Area, I have lots of Leftist friends.)  If the text on the image is unclear, this is what it says:

There is nobody in this country who got rich on his own.  Nobody.  You built a factory out there — good for you.

Now look.  You built a factory and it turned into something terrific or a great idea — God bless!  Keep a big hunk of it.  But part of the underlying social contract is you take a hunk of that and pay forward for the next kid who comes along.

There are so many things wrong with Warren’s statement that I really don’t know where to begin.  Tonestaple sent me an email that certainly gets the tone right (which led to my post’s title):

They [meaning the middle class Leftists who applaud the above statement] seem to think it is the ne plus ultra of common sense.  I think it sounds like a gangster saying, “Nice factory you’ve got here – be a shame if anything happened to it.”

As my interlineation about Gibson Guitar shows, Tonestaple perfectly nailed the reality behind Warren’s cutesy, nursery school-esque, “God blessy” statement that everybody should share with everybody else.”  The reality is that, in Obama world, if you don’t make nice with the government, the government is not going to make nice with you.  (The cutesy tone, incidentally, is classic Warren. She was one of my law school profs, and I found her invariably sweet in word, unintelligible in substance, and vaguely vicious in action.)

The second problem with Warren’s statement is actually a much more profound one than her “forgetting” that it’s the employers who provide the goods, services and salaries that make all those useful taxes possible.  Warren’s statement turns the Declaration of Independence, the Constitution, and everything else the Founders stood for upside down.

In Warren’s world, a socialist world, the government owns everything.  (And don’t you love it when well paid Harvard professors advocate socialism?)  The Founders would have been horrified by Warren’s pronouncement.  As their writings demonstrate, they believed that natural rights, the rights that ought to govern any righteous nation, mandate that ownership is vested in the individual.  The government is merely a servant of the people.  We, the people, pay its salary (taxes) so that it can provide services for us.  That’s all.

You don’t have to go very far to understand that the Founders wouldn’t have agreed with Warren that the government allows people to own things, provided that they then make nice with the government.  Our seminal document, the Declaration of Independence, spells out the master-servant relationship, and it is the people who are masters and the government the servant, not vice versa:

We hold these truths to be self-evident, that all men are created equal, that they are endowed by their Creator with certain unalienable Rights, that among these are Life, Liberty and the pursuit of Happiness. — That to secure these rights, Governments are instituted among Men, deriving their just powers from the consent of the governed, — That whenever any Form of Government becomes destructive of these ends, it is the Right of the People to alter or to abolish it, and to institute new Government, laying its foundation on such principles and organizing its powers in such form, as to them shall seem most likely to effect their Safety and Happiness.

These were the principles on which our nation was founded, and they provided the guiding paradigm for our Constitution.  When my children ask me what the Constitution is, I have a very simple answer:  It’s a contract under which the federal government promises to provide certain limited services for the American people and, further, promises not to abuse the power that the people hand the government to enable it to carry out those services.  Elizabeth Warren clearly has no use for our nation’s contract.

If you like my writing, you can get more, lots more, by purchasing The Bookworm Turns : A Secret Conservative in Liberal Land, available for $2.99 at Amazon

,  Smashwords or through iTunes.