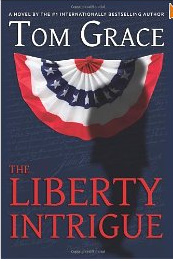 One of the nicest perks about having a slightly well-known blog is the fact that authors and publishers occasionally ask me to review a book.  In this way, I get the opportunity to read books that I otherwise wouldn’t even know exist.  My approach to book reviews is simple:  If I enjoy the book, I’m happy to review it, because I want to share my good fortune with my friends.  If I don’t enjoy a book, however, I don’t give it a bad review.  Instead, I don’t review the book at all.  I find it impossible to write about a book that bores or disappoints me.  This is why, at my blog, you’ll only read positive reviews.

As you’ve guessed by now, I’m very happy to give a positive review to Tom Grace’s newest book, The Liberty Intrigue

. Let me start with the publisher’s own description of the book, before I get to why I liked it:

Ross Egan has quietly labored for years in the West African nation of Dutannuru—a tiny republican democracy that emerged from the wreckage of the brutal civil war that claimed the brilliant engineer’s wife and child. When a neighboring despot threatens Dutannuru with renewed violence, Egan is abruptly thrust onto the world stage at the center of the deadly international crisis. Egan’s actions and resulting notoriety land him on the short list of individuals capable of challenging the progressive incumbent for the presidency of the United States—if only he can be convinced to run. A political neophyte, Egan is intrigued by the challenge of unseating a ruthless political operator seen by some as the most dangerously leftist president in the nation’s history. To win the White House, Egan must mount the most unorthodox presidential campaign ever attempted — and navigate through a daunting new world marked by character assassination, high-level corruption, armed raids, and political murder.

I have to admit that, for the first two chapters, the book didn’t engage me because I didn’t “get” it.  The Liberty Intrigue begins in the fictional African nation of Dutannuru.  Reading those chapters, I thought that, despite the run for the White House that figures in the book, most of the action would take place in Africa.  I had visions of a bloody thriller with hero Ross Egan on the run from machete-wielding African militias.  I like thrillers, even bloody thrillers, but Africa isn’t one of my favorite venues for these books.  There’s a reason for this:  Africa depresses me.  It’s a continent [with a face palm for my silly error] that is rich in natural resources (human, mineral, environmental, etc.), and yet it is a perpetual basket-case.  (Incidentally, one of the best books on this subject — a book that, sadly, is not outdated despite being almost 20 years old — is Keith Richburg’s Out Of America: A Black Man Confronts Africa

.) The sad fact is that a thriller set in Africa is never going to have a happy, or even a satisfying, ending.

Fortunately for my reading pleasure, I stuck with the book, which didn’t stay in Dutannuru for long.  The Dutannuru beginning was not wasted time, though.  It establishes Egan as a man who combines idealism with pragmatism, both of which are rooted in his faith in the American Constitution as a template for a successful society, one in which citizens can both work and dream.  The America to which Egan returns from his Africa sojourn, however, is not a Constitutional America.  Instead, it’s an America that has been under tight Progressive control for three years.

It isn’t a coincidence that the fictional America has the same political posture as the real America.  From the moment Egan returns to the states from Africa, he is confronted with an America that looks precisely like America in 2012 — only the names are changed.  The president is a hard core Leftist who wants to substitute social justice for Constitutional principles, all while enriching himself and his friends; the Vice President is a buffoon, who exudes a certain shadiness, and who has a knack for saying the wrong thing; the president’s campaign manager mirrors David Axelrod insofar as he lives to dig for opposition dirt and disrupt democrat processes; and the President’s closest friend and most powerful backer is a Soros-like multi-billionaire who manipulates world markets and funds various hard-core Progressive organizations.  Those are the novel’s statists.

The individualist side of the book has several important characters who move the plot forward, but only two are carefully delineated spokespeople for conservativism.  First, we have Egan, who powerfully articulates core constitutional arguments and positions.  Of course, I’m sorry to say that this means he is not analogous to any modern conservative politician.  The other dynamically drawn conservative character is a talk radio host, Garr Denby, who sounds uncannily like Rush Limbaugh.  (It really is uncanny.  Grace has a perfect ear for both Limbaugh’s style and substance.)  The book details the way in which Egan’s friends, who believe he is the only one who can save the nation, work with him to create an unconventional campaign that keeps the Progressive president perpetually off balance.

Large parts of the book are straightforward polemics.  Grace has the president make speeches and conversational asides that support Progressive political principles, while Egan and Denby counter with speeches explaining why America’s constitutional freedoms provide the best solutions to economic problems and illegal immigration.  (For the most part, Grace shies away from discussing foreign policy issues.)

Normally, I find polemical novels boring, since they’re wooden and artificial.  By using a presidential election as a format for his novel, however, Grace overcomes the artificiality problem because he’s able to have the characters state their positions in the natural context of political speeches, debates, strategy conferences, or talk radio shows.  Grace deals with the wooden speech problem simply by having a good ear.  As I noted above, Grace’s take on Rush is perfect.  It’s almost possible to believe that Rush himself helped Grace write Denby’s lines.  When the Progressives speak, it sounds as if Grace copied their familiar tropes and talking points, so they’re scarily realistic.  And when Ross Egan speaks, Grace has him say what we all wish our inarticulate Republican candidates (e.g., McCain or Mitt) or our slightly loopy Republican candidates (e.g., Newt or Ron Paul) would say.  It’s something of a relief to see any candidate saying these things, even if he’s only a fictional character in a novel.

In some ways, as you’ve probably gathered from this review, I found the plot almost a secondary feature in the book.  (Which is unusual for me, as I like my books plot driven.)  The Liberty Intrigue has clever and often exciting twists and turns, but the book’s real value lies in Grace’s ability to articulate clearly and elegantly core conservative principles, and to stress how these principles stand in direct opposition to the damaging governance the Progressives are visiting on the United States today, not in a novel, but in real life and in real time.

I enjoyed The Liberty Intrigue very much.  I was fortunate enough to get a courtesy review copy, but I can confidently say that this is a book I would happily buy right before a vacation, which is the one time of the year I always dig deep and buy actual books for flights, train rides, at-sea days on cruises, etc.  More than that, I would buy The Liberty Intrigue, not as an e-book, but as an actual paper book.  That way, I could leave the book behind in the hope that some other vacationer would pick it up and learn something.