This morning, I linked to a very clever post that Bad Catholic put up, chastising the Obama administration for doing a sleight-of-hand, completely fake “compromise” regarding its demand that religious organizations fund birth control, sterilization and abortifacients.  At the end of the post, Bad Catholic invites readers to sign a petition urging the administration not to make an ass of itself with regard to the issue.   If one clicks on that link, one finds oneself on a page that is part of the White House’s own citizen petition website, which it patriotically calls “We the People.”  That is, the White House invites citizens to create and circulate online petitions using the White House’s on server and website as the host:

Welcome to We the People on WhiteHouse.gov. This tool provides you with a new way to petition the Obama Administration to take action on a range of important issues facing our country. If a petition gets enough support, White House staff will review it, ensure it’s sent to the appropriate policy experts, and issue an official response.

Well, that’s exactly what Bad Catholic did:  he petitioned “the Obama Administration to take action on [an] . . . important issue[] facing our country” — namely, the issue of religious freedom.  Incidentally, unlike those on the Left, we conservatives define religious freedom, in accordance with the Founder’s understanding and the explicit Constitutional language, to mean that the federal government may not use its coercive powers to interfere with religious doctrine or practice.

The petition which, unfortunately I didn’t copy, was very funny.  The worst word in it was “ass” as in the remonstrance that the federal government “cease being an ass.”  In simple, amusing, non-violent, non-threatening, non-intimidating language, Bad Catholic stated that the so-called “compromise” did not fool Catholics or other pro-Life individuals and organizations, since it still requires all employers to fund insurance that pays for birth control, sterilization, and abortifacients.  Bad Catholic then politely asked that the White House withdraw this mandate.

Well, the White House did withdraw something: 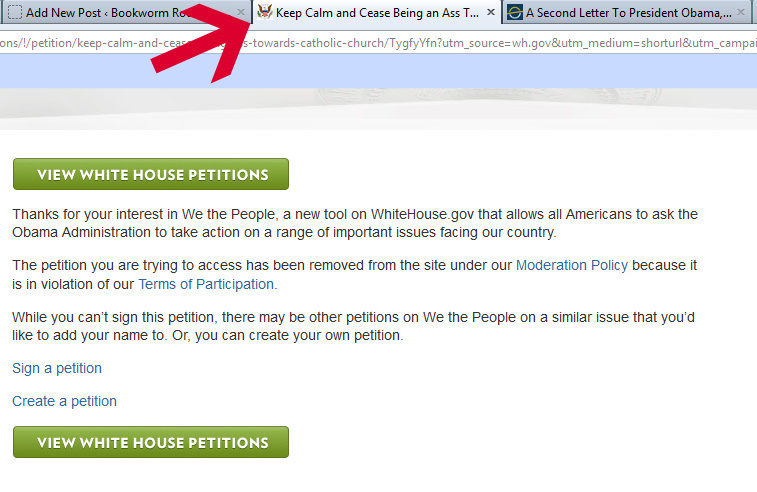 Yes, the White House, rather than withdrawing the mandate, withdrew the petition.  Nor did I inadvertently link to the wrong page.  As you can see from my helpfully placed red arrow, I linked over to the correct petition, since the tab and the URL both still refer to a petition entitled “Keep Calm and Cease Being an Ass Towards the Catholic Church.”

That’s Obama democracy in action.  Now we know what happens when we ” petition the Obama Administration to take action on . . . important issues facing our country.”  The White House deliberately deletes and ignores us.

Just to give you a little perspective on this, I feel it’s worthwhile reminding you that, in George Orwell’s Nineteen Eighty-Four

, Winston Smith’s job was to engage in historical revisionism.  In other words, Winston erased history, ensuring that the present always comported with the government’s current political needs and posture.