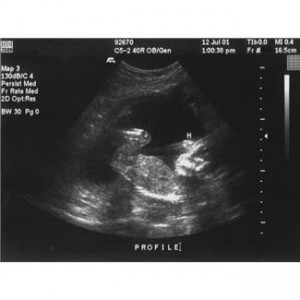 I will never forget my first ultrasound, when I was pregnant with my first child.  I was not an enthusiastic pregnant woman.  It was my husband, not I, who wanted children.  I had them only (a) because when I married my husband I felt I owed him a family and (b) because, when I was growing up, those of our family friends who were childless were unpleasant, rigid, unimaginative people, something I attributed to their childless state.  I figured that, like ’em or not, having children was an inextricable part of growing up.  So there I was pregnant and, starting just one week into the pregnancy, vomiting 24/7.    I therefore did not view the ultrasound with any particular enthusiasm.

The ultrasound experience wasn’t particularly congenial.  I lost my clothes from the waist down, and had to lie on a cold, hard table.  The nurse smeared this nasty, cold, jelly stuff on my still flat belly.  (I really miss that flat belly.)  I shuddered.  She then started rolling a cold, hard device across my stomach.  I shuddered more.  And then I turned my head, and saw a string of pearls appear on the monitor.  That string of pearls was my child’s spine.  Everything else on the screen was kind of vague and fuzzy, but I could see clearly that perfectly formed little spinal column.

I never did get reconciled to the vomiting I experienced during my entire pregnancy, and I still miss the relative hedonism of a life without children (sleeping in, eating ice cream without getting fat, having a tidy house), but that string of pearls transformed me.  There was a human being in there.  I never lost sight of that fact.  And when I look at my blooming teen and tween, both fully realized, interesting, intelligent, and vital people, I remember those pearls.

One thing I can tell you with absolute certainty is that, if I had gone to the doctor’s office for an abortion, I would have bitterly resented that ultrasound.  Instead, of thinking of the fetus as a “thing,” I would have been forced to recognize its humanity.  Instead of disposing of a “thing,” I would have been killing a “person,” with a spine like a string of pearls.  That is a serious disincentive to abortion.  This is so because, even if one sees photos in high school biology class of a fetus, it’s quite different when that fetus is inside you.

Both pro-Life and pro-Abortion people understand the emotional resonance of scans.  That is why the Virginia legislature has passed a bill mandating scans before abortion, and why Progressive commentators are likening these same scans to rape.  Here is Dahlia Lithwick, whose post advocating this rape position is currently the most prominent:

Because the great majority of abortions occur during the first 12 weeks, that means most women will be forced to have a transvaginal procedure, in which a probe is inserted into the vagina, and then moved around until an ultrasound image is produced. Since a proposed amendment to the bill—a provision that would have had the patient consent to this bodily intrusion or allowed the physician to opt not to do the vaginal ultrasound—failed on 64-34 vote, the law provides that women seeking an abortion in Virginia will be forcibly penetrated for no medical reason. I am not the first person to note that under any other set of facts, that would constitute rape under state law.

Before touching on true purpose behind this manic, and ugly, hyperbole, let’s get the facts straight.  It’s entirely untrue that all ultrasounds performed during the first three months of pregnancy are done using a transvaginal procedure.  In fact, there’s only a very small window of time during which the transvaginal procedure is the only way to perform the scan:

Abdominal and transvaginal ultrasounds are both effective at early stages of pregnancy. This fact is acknowledged in this “continuing medical education” module produced by the National Abortion Foundation (tag line: “A Provider’s Guide to Medical Abortion”):

So, yes, transvaginal is more reliable for detecting pregnancies for a period of about seven days. Please note the Orwellian use of the word “treatment” for “killing of the baby.” How does this require a woman to have a transvaginal ultrasound? Short answer: it doesn’t.

Here’s another fact that Lithwick ignores — or maybe Lithwick has never been to any of my OB-Gyns.  (Guys, feel free to ignore this paragraph if it makes you uncomfortable.)  My OB-Gyns have always followed a consistent pattern in their dealings with the women who appear in their offices:  take your clothes off, stick your feet in the stirrups, and have the nurse or doctor poke around inside of you, both with digital manipulation and with that truly nasty speculum.  When you’re at the OB-Gyn, penetration is pretty much the name of the game.  (For those guys who are still with me, this is why women never express the proper amount of sympathy when you complain about having your prostate checked.)  If you show up for an abortion during that one week during which a transvaginal ultrasound is more reliable than a transabdominal ultrasound, the ultrasound is just one among many penetrations.  (Abortion, too, requires penetration.  Just sayin’.)

There’s a reason for Lithwick’s hyperbole, though, and it’s not because she’s upset about the Virginia law.  Or at least, that’s only the smallest part.  My sister, who is as uninterested in politics as can be, called me today outraged that Republicans generally, and Santorum specifically, are making contraception illegal.  She was completely taken aback when I explained that Republicans are only trying to preserve a status quo that has been in place since 1965; namely, that contraceptives and abortifacients are freely available everywhere in the U.S., but that churches don’t have to pay for them.

The Democrats are not making contraceptives even more available than they’ve been before, which is an impossibility given their current unlimited availability.  Instead, they are seeking to shift costs onto employers, including religious organizations and individuals who are doctrinally opposed to contraceptives and abortifacients.

My sister was receptive to the truth, and I was fortunate enough to have the opportunity to explain to her the entire story.  She got that she was the victim of a Big Lie.  Most voters, however, aren’t my open-minded sister and, even worse, they don’t have me sitting there walking them through the lies and smears.  Instead, they’re begin manipulated into believing that Republicans and conservatives are depriving women of all access to contraceptives and then, once they’re pregnant, raping them.  That’s the Big Lie, and that’s what Democrats think will win them the election in 2012.

Many commentators have shuddered at the way in which Republican candidates are stupidly making this election about women’s sexual rights.  What they miss is that the whole abortion/contraception issue is a tar baby* that Democrats placed squarely in the Republicans’ path, so that it was impossible for Republicans to avoid.

What might happen, though, and what we must hope will happen, is that the Democrats will prove too clever by half, so that this whole thing backfires.  Remember that, in the tar baby tale, despite the tar baby’s initial success in capturing Br’er Rabbit, the rabbit’s own cleverness, and the Fox and the Bear’s hubris, meant that the tar baby ultimately failed.  As Americans realize that the smelly, sticky lies about abortion and contraceptives originated with the Democrats, it might be s the Republicans who head off laughing into the briar patch, leaving the Democrats holding nothing at all.

*I recognize the possibility that ill-informed Progressives will assume that, by referring to a tar baby, I am making some sort of racist remark about President Obama.  I’m not.  I am referring instead to an African folktale that came to America with the slave trade, and was preserved in the Southern black oral tradition.