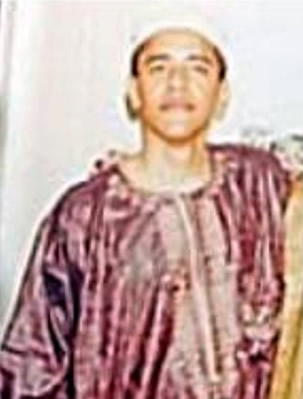 Barack Obama has kept carefully hidden all of his college records.  Many of us have assumed that this secrecy is because those papers show that he took nothing but Leftist Mickey Mouse classes and ended up with lousy grades.

Now that we know that Obama marketed himself to publishers as a Kenyan, though, we’re beginning to suspect that the papers hide, not only academic mediocrity, but the same Kenyan identity Obama was using to market himself in the publishing world.  The question, of course, is why would Obama pretend to be African?  After all, when it came to college admissions, wasn’t being black good enough for affirmative action purposes?

Normally, in the years since the Civil Rights movement, the answer would be “Yes, being half-black (not half-white, but half-black) should have given Obama the leg-up he needed to parlay mediocre grades and a drug habit into a shiny diploma from one of America’s best institutions of higher education.”  Obama’s problem, though, was that he came of age at a very specific time in the annals of affirmative action.  To appreciate this, you have to know that Obama, who graduated from high school in 1979, must have started looking at colleges in 1978.

Allan Bakke was a young man with an excellent academic record, who nevertheless got turned down by 12 medical schools.  When he applied to the medical school at UC Davis, and was again rejected, he learned that he had almost certainly lost out on the opportunity to attend that medical school because UC had set a quota for admitting non-white people in order to meet the University’s “diversity” requirements.   Bakke sued.  In a deeply fragmented decision, the Supreme Court held that this race-based admission process was unconstitutional.

With that decision, Obama, who was a self-confessed slacker in high school, suddenly lost his e-ticket to a good college.   He couldn’t know then (nor would it have mattered) that the various concurrences in this deeply divided opinion would eventually open the door to colleges and universities making race a “factor” in admission, so much so that this “factor-ness” eventually created a whole new quota system.

My best guess is that, denied an opportunity to use quota systems to parlay a lousy academic record into a quality college admission, Obama searched around for other means of bypassing his academic failings.  It was this search that led him to announce that he was Kenyan.  I’m sure that a certain amount of digging will reveal that, just when the Bakke decision came down, American universities were engaged in some sort of pro-active policy involving increasing the number of African nationals on America’s college campuses.  Obama was happy to oblige the universities in this effort by co-opting his father’s nationality, and burying the fact that he was a garden-variety American black kid.

There’s the nexus — In 1978, Obama, who already then was willing to lie to achieve his goals, created a false identity to deal with the changes the Bakke decision wrought on college admissions.

UPDATE:  This isn’t so much an “update,” as it is further thoughts.  Although this post might explain why Obama did what he did, it’s really less of a post about Obama himself than it as an indictment showing the rot in the whole race/affirmative action system.

I actually came at the theory bass ackwards, when I was writing about the commonality between Warren and Obama.  I began by looking at affirmative action’s origins as a well-intentioned paving stone on the road to Hell.  In the beginning, do-gooders felt that it made sense to give the then-current generation of blacks a leg up, rather than making them wait the two to three generations it took other disenfranchised people (Irish immigrants, Italian immigrants, Jewish immigrants, etc.) to “make it” in America. After all, we had forced upon these blacks their sufferings, and it was up to us to fix it, and to fix it quickly.

Once it affirmative action became institutionalized, however, it inevitably became corrupt.  From the institution’s side, it was a numbers game and a way to boast about liberal credibility, irrespective of whether the student or employee benefiting actually suffered handicaps from his or her race.  (Witness the way Harvard milked Elizabeth Warren’s Native Americanism, despite the fact that, even if true, it never handicapped her upbringing or denied her educational opportunities.)

From the point of view of ordinary Americans who were willing to say anything to advance, it became a ginormous loophole.  For example, back in the 1970s, I knew a rich Jewish girl with average grades who got into Lowell, San Francisco’s academic high school, by using a dark complexion and a fake accent (~) on her lily-white name to pretend to be Hispanic.  Fearing a charge of racism, the district caved and let her in, despite the fact that other students who did not run from their white heritage had better grades.  Elizabeth Warren is not the first to play this game.

Thinking about this history, I asked myself why Obama didn’t just leverage himself through the system based upon his being half-black?  Why did he have to be African?  It was those high school memories that let me to the answer.  Like me, Barack Obama, who is almost exactly my age, graduated in the shadow of Bakke.  It didn’t affect me, but it sure as heck must have affected him.

Standing alone, my Bakke theory does nothing more than prove, once more, that Obama lies, which is something we’ve seen in real time over the last 3.5 years.  Nevertheless, I think this theory has a larger utility insofar as it lays bare one of the rotten pillars of the Leftist race hustlers.