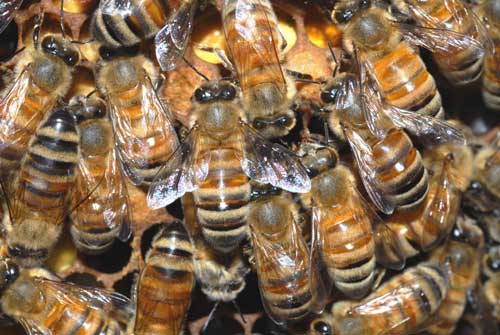 Radiolab is a show produced for a New York public radio station.  That tells you everything you need to know about Radiolab’s political orientation.

The other day, Radiolab broadcast a story about the Hmong (American allies during the Vietnam War), their suffering at Communist hands when the Americans pulled out, their experience with toxic “Yellow Rain,” and the Reagan administration’s reliance on Yellow Rain stories to justify producing some chemical weapons:

Producer Pat Walters brings us a detective story from the Cold War, about a mysterious substance that fell from the sky in Southeast Asia at the end of the Vietnam war.

As retired CIA officer Merle Prebbenow explains, once the US pulled its troops out of the region, the communists took over — the Viet Cong and their allies in Laos the Pathet Lao. Eng Yang, who was living in a tiny village in Laos in 1975, explained what that meant for him, and his family and friends. Eng, who talked to us with his niece Kao Kalia Yang translating, is Hmong. Thousands of Hmong fought alongside the Americans during the war, and when the US left, they were targeted by Viet Cong and Pathet Lao, who were out for revenge. Eng says it started with isolated killings, until one day, his whole village was attacked. He and thousands of other Hmong fled their homes and went into hiding in the jungle. And that’s when they started seeing it — yellow droplets that fell from the sky and splattered the landscape, followed by dying plants, animals, and eventually friends and family doubled over with stomach problems.

When US scientists looked at the yellow spots, they found poison, and pretty soon “Yellow Rain” as it was known, had become a flashpoint in the cold war. Chemical weapons expert Matt Meselson and biologist Thomas Seeley, two scientists bent on analyzing the substance, tell us what happened when they challenged the original reports (which were used to justify the production of a chemical weapon by the US back in the early 80s). And when we explain their views to Eng, who saw loved ones die, and who fled his home in Laos to escape, we have to reckon with a very different kind of truth.

What the precis, above, doesn’t say, though, is that these chemical weapons’ experts concluded that the Hmong were assaulted by nothing worse than “bee poop.” It doesn’t take a genius to know the Radiolab line of thought:  America and her allies were paranoid about communists; this paranoia saw a simple group of people equate a natural phenomenon with communist poison; and the paranoid and stupid Reagan administration piggy-backed on this primitive ignorance in order to justify creating weapons of mass destruction.

The only problem with Radiolab’s reasoner was that the show’s interviewer, Robert Krulwich, pushed Eng Yang and Kao Kalia Yang too hard as he tried to force them to spout the party line.  Krulwich essentially called Yang an idiot who wouldn’t recognize bee poop if he saw it.  To maintain this fiction, the show apparently failed to translate Yang saying that he was a beekeeper, so he knows bee poop.

Instead of outrage at the Reagan administration for being stupid enough to be taken in by a bee poop rain, the show’s audience was outraged that it would pick on a sweet little old man who had suffered so terribly at Communist hands:

A response from Kao Kalia Yang from her Tumblr page http://www.tumblr.com/tagged/kao-kalia-yang

“I’m writing you because today RadioLab aired a piece on Yellow Rain. They contacted me earlier this summer saying they wanted a Hmong perspective. I facilitated an interview with my Uncle Eng Yang because he lived through the experience. I agreed to serve as interpreter. The interview went on for about two hours. Robert Krulwich, one of the host of the show, grew increasingly disrespectful toward my uncle’s experiences and his lack of formal education. I lost the reigns on my emotions and I stopped the interview. This is of course the part that the show decides to end on.

“The story is billed as a search for Truth. I am a firm believer that the Truth belongs to those who’ve lived it. I am still processing the story they aired and all the information edited out (my uncle’s explanations about the Hmong experience with bees, how we have harvested honey for centuries, how the attacks happened far from bee settlements, how they were strategic in that they happened only where there were heavy concentrations of Hmong people).

I speak Hmong and can hear Eng telling the interviewers repeatedly in the final cut he knows what bee pollen looks like. It’s disingenuous for you have us assume you understand Hmong. Radiolab is counting on your ignorance of the Hmong language to create the emotional story you heard. If you are Hmong-speaking you’ll hear how poorly the story was put together. If they went to Eng for his story, they did a very good job at keeping it out of the final cut because they cut almost all of the interview out and kept just the anguished cries of the interpreter (I refer to Kao Kalia as an interpreter because Eng was supposed to be the primary interviewee), who was compelled to advocate for her uncle when Robert, et. al started to inflicted emotional pain on Eng. Even Kao Kalia’s husband, who witnessed the interview, has said Eng was talking about his knowledge of bees and told the interviewers he is an experienced beekeeper. Did you hear any of this in the final cut? Not unless you understand Hmong!

If you bother to read the comments below you will find public comments from Kao Kalia, her husband and Paul Hillmer, who Radiolab contacted initially for a lead and was referred to Eng Yang. Read Kao Kalia’s comment about how it came about she took on the interview. Read her husband’s first-hand account of what he witnessed before you make more assumptions about the Radiolab story as you’ve been fooled.

Lastly, the science on the bee pollen is inconclusive and it is alleged that Meselson did not collect samples in the area where the Yellow Rain genocide took place. Here is an excerpt and link to the article refuting his research:

“A particularly vicious piece palmed off as scientific research was published in the Sept. Scientific American by Harvard biochemistry prof Matthew Meselson and two others. Meselson, whose trip to SE  Asia had been financed by the leftist MacArthur Foundation, collected bees’ feces (droppings) far away from any war zone, examined the material by electron microscopy and other methods, not  surprisingly found some toxins in it, and not surprisingly found no man-made toxins attributable to Soviet weapons.” -Wall Street Journal in 1987 by William Kucewicz: http://www.fortfreedom.org/y04.htm

As far as I’m concern, Radiolab’s story is science fiction.

Robert Krulwich you don’t have the skill or depth to understand or represent the human heart, especially a broken one. For me to listen to radiolab again I want this next segment for you to say sorry ON AIR so that we can all hear and that our soft, human heart can rest.

I lost a lot of respect for Robert Krulwich after listening to this episode. He was being downright cruel to a man who had endured such horrible things during his life.

A new low for Radiolab. Frankly, I’m shocked this interview was even aired. It was just disgusting.

Shame on you, Robert.

I’ve never posted here, but have been disturbed for days after listening to this episode. This was at best sloppy journalism and at worst extremely disrespectful to the thousands of Hmong people who died and their families who were left in the aftermath. Shame on Robert Krulwich for taking a know-it-all stance in the face of the people who ACTUALLY lived through this horrific experience. His tone and attitude towards these people was reprehensible. An apology needs to be issued, by NPR if not on part of Krulwich.

When last I checked, there were 149 comments, the vast majority of which were angered and disgusted that Krulwich felt the need to bully a little old man in order to force his story into shape.

What these NPR-liberal audience members don’t understand is that the kind of bullying they saw is inevitable on Progressive radio.  The Progressives have a narrative, and they will do anything to force the facts to fit the narrative.  Usually, they do this by quoting friendly experts at length or by selectively editing people or events antithetical to Progressive viewpoints.  Here, Radiolab’s editors thought that its audience would be more, rather than less, sympathetic to Krulwich as he kept trying to force an old man to acknowledge that he was a victim of America, not the Communists.  That thinking falls into the “epic fail” category.

It would be nice if those audience members who were disgusted by the segment would give something different a try — say, perhaps, conservative talk radio, which has long, open-ended segments that force, not only the guest, but also the host to defend his position.  I doubt that will happen though.  Most will just surf the internet until they find other Progressive podcasts that aren’t careless enough to show how the meat gets into the sausage.