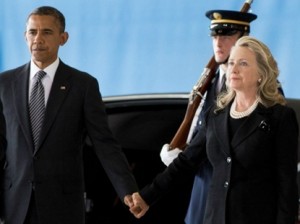 How reliable is Edward Klein?  I don’t know.  I don’t believe anyone challenged the facts in his book The Amateur

, even if they disagreed with their import.  One thing that was immediately clear from reading The Amateur was that Klein got a lot of his information from Hillary Clinton’s camp.  Klein’s reliability is very important today, because he now claims that he’s gotten some new information from the Hillary camp, and this information, if true, is staggering in its implications:  lawyers close to Hillary claim that Hillary asked for more security in Benghazi and that the Obama White House denied that request.

According to Klein’s sources, Hillary has been keeping mum about this to stay loyal to the Democrat party, while Bill has been urging her to go public with the information to save her reputation.  Here’s what I think happened:

Events played out exactly as Hillary’s leakers claim.  Hillary was silent about the White House’s culpability when it still looked as if Obama could win, because she needed to be on Obama’s good side in the event he won the election.  Now that Obama has the stale smell of failure about him, two things have happened.  First, Hillary doesn’t believe that Obama’s coat tails will be very useful.  And second, the Democrats are launching a preemptive strike against Bill Clinton, claiming that it was his bad advice that led to Obama’s disastrous campaign decisions.

The Obama administration won’t be the first to learn that you don’t mess with Bill Clinton, especially if there’s nothing in it for Bill.  And so the leaks begin.  This way, Hillary still looks loyal, but Bill gets to destroy someone who is trying to destroy him.  Even if it’s not war in the Middle East, there’s going to be a war in Washington, D.C.

This leaked report also makes sense from both a military and a security standpoint, as Wolf Howling explains:

Why should we believe this might be true? I have enough experience in the military and with providing security with weapons loaded to know that the people administratively charged with making decisions on security would not possibly have denied the requests absent a policy decision made at a much higher level. And indeed, I cannot see any career employee in the chain of command denying a request for more security in Benghazi, given the availability of assets and all that was known about the deteriorating situation. In other words, I would bet my last dollar that the decision to deny more security was made pursuant to a policy decision in the political chain of command – and that means Clinton and / or Obama. And if there is any truth to the story above, then that person was Obama.

(You can, and should, read the rest of Wolf Howling’s analysis here.)

Assuming that concrete evidence surfaces quickly, the real story is whether the MSM will be able to sit on this story until after the election.  If the media can’t control the narrative, this story should be the last nail in the Obama campaign coffin.

UPDATE:  My post about today’s news — that the administrrefuse refused to send help — is here.)