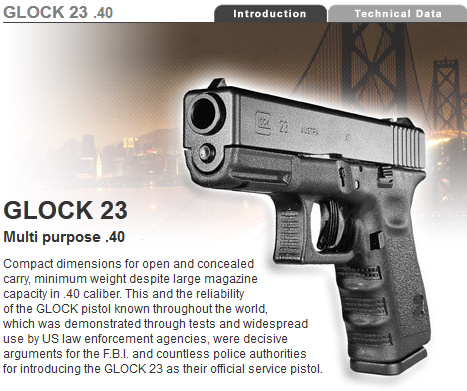 I had a delightful reason for my blog silence today:  I had a pistol safety and training class, followed by an instructor supervised hour at the shooting range.  As you all know, on November 28, 2009 — exactly three years ago — I went to the shooting range with my brother-in-law and had a wonderful time.

Up until today, that long-ago outing was my first and last day at a shooting range.  Back home, none of my friends are interested in going to the local gun range.  I’ve heard it’s very good, but I was too intimidated to go on my own.  Also, while our local shooting range has very competitive prices for the San Francisco Bay Area, it was more than I could justify spending on something that would be purely for my pleasure.

What changed this non-shooting pattern was a Living Social offer I got in my email:  three hours of pistol safety and usage training, plus one instructor hour on the range, all for $75.00.  Saying “yes” to that was a no-brainer.

Early this morning, feeling a mixture of excitement and trepidation, I made the 50 minute drive to Burlingame to Bay Area Firearms.  If you are thinking of going there, be warned:  if you don’t have navigation on the car, memorize the route beforehand, because the exit interchange and overpass is one of the most complicated I’ve ever experienced.  Thankfully, I do have navigation in my car, or I think I’d still be looking for the place now.

Bay Area Firearms is tucked away almost invisibly in a little office complex.  The front of the office sells and rents scuba gear.  The back of the office is dedicated to weapons and weapon training.  Scott, the owner and one of my instructors, had four or five gun safes, each about 4 feet tall, occupying the far wall of the room in which I trained.  (I appreciated the fact that, every time he opened a safe, he was meticulous about locking it the moment he finished using it.)

I got lucky, because I was originally supposed to be part of a group class.  When the other two attendees canceled, however, I had Scott all to myself.  And when Scott started feeling ill (Get Well Soon, Scott!), he seamlessly passed me into Dean’s very capable hands.  Both men were very patient and supportive.  They fully agreed with my philosophy (at least when it comes to physical skills) that repetition is the best teacher.

The gun I learned on and used was a Glock 23.  After going through the NRA’s fundamental gun safety rules several times to make sure I fully understood them, Scott and Dean taught me how to use the gun.  This started with the stance (a good fighting stance), how to pick the gun up, how to insert the magazine, etc.  They were very particular about my having a good grip, which I found very helpful.  Not only did it stabilize the gun, but it also meant that my finger didn’t wander down to the trigger until I was actually ready to fire.

Because Bay Area Firearms doesn’t have an attached range, Dean and I headed even further south to Reed’s Indoor Range, in the heart of Silicon Valley.  It is a very impressive place.  I arrived at the tail end of lunch and the front room, where they process people and sell myriad guns and gun supplies, was packed.  I later learned that firing a few rounds at the range during lunch is a popular activity at Reed’s.  The staff was helpful and friendly.  Also (and the ladies will appreciate how important this is) the single bathroom — that is, one used by both men and women — was immaculate.  It seems that guys who shoot guns have good aim no matter the activity.

Dean was great.  He explained everything to me, patiently took me step-by-step through the first few rounds, and was very supportive of my progress.  Here’s the target I worked on: 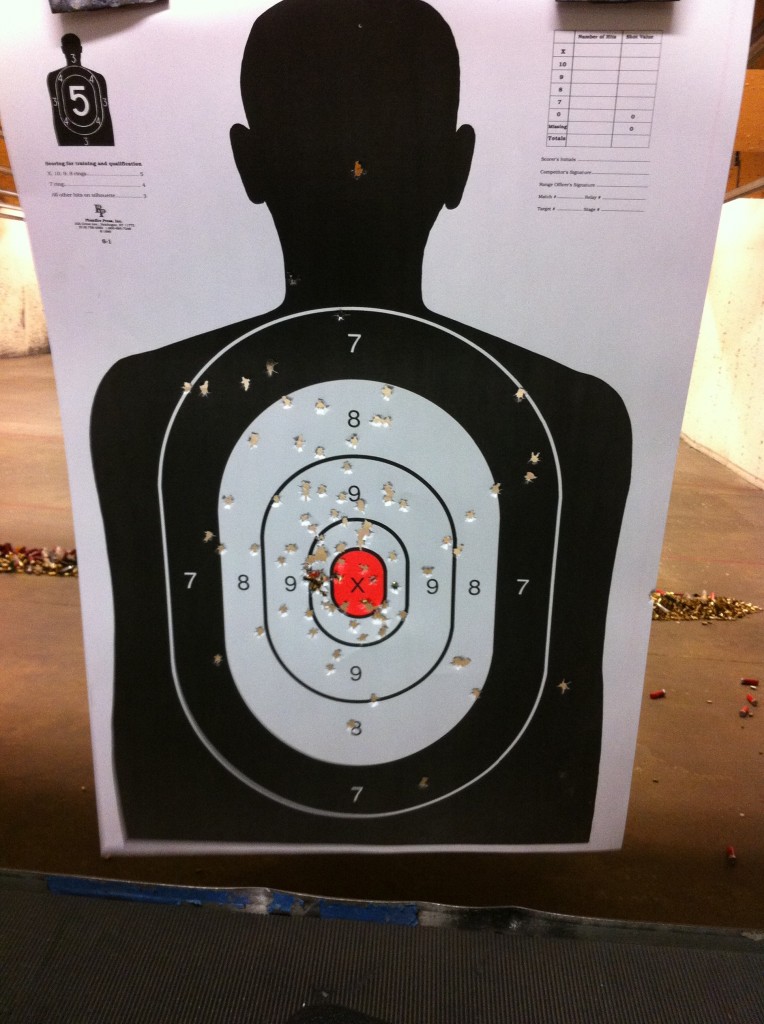 The results aren’t actually as bad as they look.  With straight-on shooting, at about 25-30 feet, I consistently hit inside the red part or inside the circle immediately next to the red part.  My shooting degraded somewhat when we moved the target further back to about 45 feet.  It took my a little while to compensate for the curve.  Also my vision, when fully corrected, is only 20/30, so I was a bit outside of my vision range.  Whether near or far, you can see that I periodically swung left.  I’m left hand dominant, and it took a huge effort for me to keep absolutely straight.  Still, I stayed within the No. 9 circle, except for a few very close eights.

The stray shots — the ones in the No. 8 circle and the black areas — happened when I tried the triple shot:  tap, tap-tap.  If I had been shooting an intruder, I would have gotten his torso every time, but only the first shot would have been on target.  I also had a hard time doing one-hand shooting with my right hand, which accounted for a couple of those wild shots.  I did much better shooting one-handed with my left hand.  By then, though, I was starting to feel my muscles.  I’m in very good shape, but holding a 31 oz gun at arm’s length was working muscle groups I didn’t know I had.  By the last round, I had a fine tremor going on.

Dean paid me a very nice compliment, which was that I did a very good job of grouping.  And, if you look at the first two circles (the red and the first white), I think he was right.  “You have good focus,” he said.  I don’t know about that, but I do know that I had good fun.

In addition to fun, I was reminded that, if used carelessly or with malice, guns are very dangerous.  If used correctly, though, with proper respect for the harm they can cause, guns are a delightful form of recreation.  There’s something viscerally satisfying about firing a gun and hitting the target — and the better the shot, the more satisfying it is.