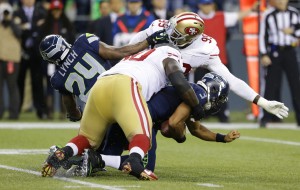 Peter Beinart is in agony, because he’s a terrible father.  Why is he such a terrible father?  Because he allows his son to watch pro football with him.  By doing so, says Beinart, he lends his imprimatur to something that’s really no different from a Roman gladiator contest, with the loser gladiator executed or eaten by lions at the end:

Last Saturday night, he [Beinart’s 8-year-old son] proudly dug out a long-unused Patriots jersey and joined me on the couch late into the night as the Patriots dispatched the Indianapolis Colts.

It was wonderful. And it made me a little sick.

It made me sick because I could see the game through his eyes. And it wasn’t pretty. My son, unfamiliar with the NFL’s pieties, assumed that hurting the other team’s players was the goal. To his untutored eye, the violence that guilt-ridden fans like myself decry was a feature, not a bug. He didn’t cheer the injuries; he’s too sweet for that. But despite my insistence to the contrary, I suspect the message he took from the experience was: The only thing you need to know about the large man writhing in agony on the screen is whether he’s on our team.

Mr. Beinart, if the takeaway lesson from football that you’re teaching your son is “let’s cheer when men get hurt,”  the problem isn’t with the game, it’s with you.  You are indeed a failure as a father because you, with all your fine words and liberal anguish, were completely incapable of teaching your son the good lessons that football — especially pro-football — teaches.

Thankfully, I’m not you.  After having watched six hours of football yesterday, I had a very different takeaway message for my adolescent son:  You can learn a lot from these guys.  The reason I enjoy watching the game is because there’s something thrilling about men giving 110% to what they’re doing.  I never watch an NFL game and think, “Gee, that quarterback is slacking off.”  Or “That tight end’s doing nothing out there.”  Anybody can be taught technique, but it’s up to each individual to bring passion, self-discipline, drive, energy, and courage to whatever he does.  Those guys who make it to the NFL — and especially the guys who make it to the playoffs — are the best of the best, not just at the sport of football, but at the art of being a man.

Watch a pro game, not for the game aspect, but in a more abstract way, just seeing the men as bodies in motion.  Every man on the field gives his all.  These guys use their bodies as missiles, battering rams, walls, whatever.  They are the quintessence of dedicated manliness without weapons.  It’s hard on the body (although the media is making up numbers as it goes about the risks associated with the game) so these guys are appropriately well-compensated.  That’s okay.  It’s a known risk that they willingly take for a tangible financial reward.

In an increasingly feminized world, pro football is one of the last bastions of unabashed manliness.  In classrooms all over America, boys are forced to sit still and read books about their feelings (where once they were at least allowed to read stories of war and heroism and adventure).  In school yards all over America, girls and boys — but especially boys — are told not to compete, not to run, not to throw, not to hit . . . heck, not to engage in any of the familiar rituals (at all times, in all cultures) that young boys do as they move toward manliness.  Rather than celebrating and cultivating manly virtues (bravery, loyalty, honor, strength), we routinely tell boys that, unless they imitate girls, they are without virtue.  Their natural instincts are defined as fundamentally bad.

And then there’s football.  I’m always amazed and impressed when I see a player run, spin, and leap, eluding attackers and, quite often, still running with at least one person attached to his leg.  My lizard brain is telling me, “If this guy was my mate, and I was being chased by anything from an enraged mammoth, to a Nazi, to a Taliban, this is the guy who would be there for me.  Pajama Boy would be screaming and weeping and begging for mercy, but this football player would lay his life down for me . . . after first inflicting some serious injury on the other guy (or mammoth).”

Yes, these guys can be as violent off the field as they are on.  The fact, though, that their violent acts make headlines tells us that, for most of them, they can turn off the violence just fine.  After all, these incidents make news because their rare, not because they’re ordinary.  In any event, I suspect that their random acts of violence have more to do with their upbringing than their football career.

Men should be allowed to be men.  I’d much rather have my guy get his instincts out in the culturally-sanctioned, structured environment of the football field, rather than spending his day pretending to be Pajama Boy, only to come home frustrated and angry.  For better or worse, we humans are animals.  The healthiest society is that which gives a controlled outlet for our animal instincts, than one that forces people to deny entirely that those instincts exist.