I’ve been a good girl today. I paid bills, cleaned the kitchen, set up appointments for various family members to do various activities, cleared some more stuff out of my in-boxes, and generally did not waste time. Now, though, I’m ready to sit back and “waste” some time by sharing all sorts of interesting stuff with you:

Priority of place has to go to Oberlin’s utterly insane proposed guidelines for its athletic department:

“It is basically intended to sort of be a 101,” Emily Clarke, a junior and member of the committee, said in an interview with Campus Reform on Thursday. “We also talk about choice, privilege and agency in presentation of gender and pronouns and ends with trans-allyship dos and don’ts.”

“It’s basically like, don’t question people about their transitioning processes, respect pronouns and names, don’t use ‘ladies’ or ‘gentlemen’ when addressing a group of people,” she said.

That’s just a drop in the bucket when trying to convey the sheer awfulness of this assault on the English language and biological reality. You really have to look at the original document to get the full flavor.

While more and more American campuses are contorting themselves to avoid offending their special interest groups, Jews in France are facing actual physical offenses, in the form of assaults by Muslim gangs. AFP notes that Jews are leaving France in historic numbers, but somehow cannot bring itself to explain why this sudden exodus is taking place. It vaguely references a “climate of anti-Semitism,” without talking about the ongoing physical assaults at Muslim hands. (This post, about the similar situation in which Danish Jews find themselves, helps pick up where the AFP, in most cowardly fashion, left off.)

Mark Steyn lambastes mealy-mouthed Leftists who think hashtags are the same as actual action. He also schools Charles C.W. Cooke, at the National Review, who rightly earned ire for saying that Holocaust Denial should be debated in public schools as an academic exercise. Steyn endorses Laura Rosen Cohen’s answer to Cooke’s proposal, which is that we debate ideas, but we don’t debate conspiracy theories that bear no relationship to known, indisputable facts.

Eliot Cohen also looks at the whole hashtag phenomenon amongst American Progressives and concludes that it’s part of a larger problem, which is that, although they wield tremendous, scary amounts of power, they have the intellectual and emotional capacity of adolescents. Hmmm. That argument seems familiar….

All across the Leftist spectrum, even as they hashtag their pleas for the release of the school girls kidnapped by Boko Haram, no one will say two important words: “Christianity” or “Islam.” Or if they do say those words, it’s to deny that they have anything to do with the kidnapping. To the Left, what we’re seeing is just this bizarre coincidence that has these murderous madmen mouthing Islamic slogans even as they (again totally coincidentally) enslave Christians, murder Christians, and murder Muslims foolish enough to hang out with Christians. Both Michael Rubin and Pamela Geller take on this intellectual deceit. The only problem with their excellent articles is that the people who need to read them . . . won’t.

Writing in USA Today (which is a pretty good venue considering that it’s available to business-class travelers in hotels and airplanes throughout America), Paul Caron says Congress should give Lois Lerner immunity in exchange for testimony. He provides a succinct, but detail-rich, summary about the IRS’s partisan attack on conservative groups, making three things painfully clear: What happened was a horrific act of corruption; the media have been complicit through silence; and Lerner is the easiest, and maybe the only, way to get to the bottom of this scandal (a scandal that I posit is the worst political scandal ever in American history).

I have several gay friends on my “real me” Facebook, all of whom date back to high school or even junior high school. Without exception, they are politically hard Left and socially absolutely militant. Nothing even slightly negative may ever be said about the LGBTQ community. I suspect, therefore, that they’re going to ignore the CDC’s recent report about resurgent syphilis in the gay community. If this is indeed what they’re doing, they’re making a terrible mistake. The AIDS epidemic should have taught them once and for all that dangerous behaviors cannot be ignored; they must be nipped in the bud lest Mother Nature lets things get wildly out of hand.

Mark Tapson posits that the professional Left’s frantic, cruel, tasteless, and heartless jokes about Benghazi hide a very real fear: There’s probably something there that they don’t want the American people to know.

Trust Thomas Sowell to get to the heart of the matter: Why are colleges sitting as prosecutor, judge, jury, and executioner when it comes to alleged rapes? Could it be because they know that, in all but a few cases, the “victim’s” claims wouldn’t survive a second when actual law and legal procedure are applied to them?

This is a marvelous blog that will help everyone understand that correlation and causation are not the same thing. And in that same spirit, here’s a thought-provoking cartoon/chart that Caped Crusader sent me. (Caveat: I have no idea if the data is accurate, but I suspect/hope it’s close to accurate, so I’m running with it.) 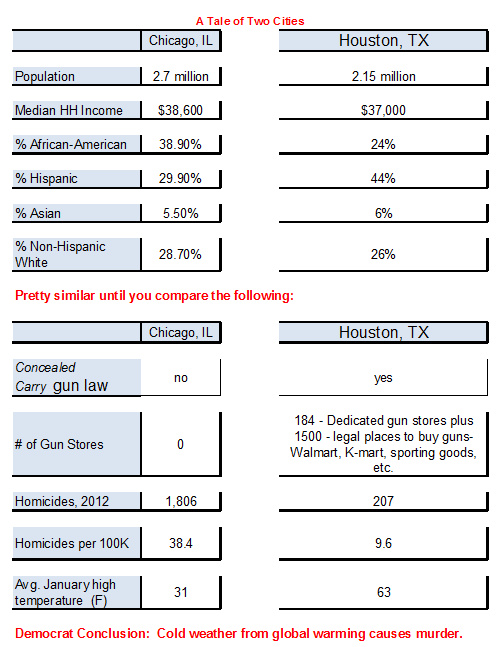