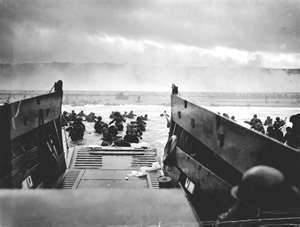 Seventy years ago today, America’s young men — most of them draftees, not volunteers — boarded their Higgins boats and headed towards what may have been the most strongly fortified beach in history. The waves were high (6-8) feet, and the men were heavily laden. Many were seasick, all were cold, and none could miss the withering defensive fire that the Nazis were sending their way. Yet when they got within wading distance of those faraway beaches in Normandy, they left the relative shelter of those boats and walked steadily into an endless hail of bullets.

Somewhere between 9,000-10,000 American men died storming those beaches. Every subsequent wave of men wading towards shore saw the same thing: their comrades, far from family and friends, torn apart or bleeding out their lives on foreign beaches. But the next wave didn’t stop. The men kept going, pushing relentlessly to the escarpments where the Germans sheltered.

There is no more devastating military formation than to climb a cliff into enemy fire. Yet that’s precisely what America’s men did on that far away, dreadful day. They were so overwhelming in both bravery and numbers, that they, along with forces from the British Empire, managed to take one German pill-box after another. Within a few hours, they broke Hitler’s impregnable Atlantic wall.

What we owe to the men and the women of the Allied forces is incalculable. Much of the civilized world would have been enslaved for decades, even centuries to come, without their effort and sacrifices. They, though, answered when they were called, and we are free. We should be thanking them every day (and I do), but we always reserve our greatest, most public thanks, for this special anniversary.

If you are interested in the details of events on D-Day, I highly recommend D-Day’s Sunken Secrets on PBS. The show’s framework is the way in which modern radar enables scientists to map with incredible precision every boat and tank that sank off of Normandy’s beaches. What makes the show special, however, is that it uses these wrecks to explain what equipment the allies were using and what the men were doing every minute from midnight onwards. Veterans of that day talk about their experiences relative to the graveyard on the Atlantic floor.  It is a deeply moving and very informative show.