. (For those who recognize the author’s name, he also wrote the Flashman novels

Early in the book, Fraser describes the uniform his platoon wore as they slogged through Burma, clearing out the Japanese presence:

The uniform was all dark green; even underpants, vests, and socks had gone into the big dye vat at Ranchi; watch-straps had to be green or khaki. You had two shirts, two pairs of trousers, puttees (a better protection than anklets against leeches and other crawlies), and boots – British-made, if you were lucky, rather than the clumsier Indian pattern; later we sometimes wore captured Jap jungle boots, with their thick crepe soles. A few – Parker, for one – dispensed with socks and filled their boots with tallow, claiming that it prevented blisters. It was also messy, and stank. I tried it – once. (Quartered Safe Out Here, Skyhorse Publishing, Kindle Edition, p. 19.)

In addition to the basic uniform, the men in his platoon wore a hat that protected them from the sun and rain, and they carried an important grooming item:

Fourteenth Army’s distinguishing feature was the bush-hat, that magnificent Australian headgear with the rakish broad brim which shielded against rain and sun and was ideal for scooping water out of wells. In some ways it was a freak, in the steel-helmeted twentieth century, and it may have cost some lives under shell-fire, but we wouldn’t have swapped it. It looked good, it felt good; if you’d been able to boil water in it you wouldn’t have needed a hotel. Everyone carried a razor-blade tucked into the band, in case you were captured, in which event you might, presumably, cut your bonds, or decapitate your jailer by stages, or if the worst came to the worst and you were interrogated by Marshal Tojo in person, present a smart and soldierly appearance. (Id. at pp. 19-20.)

Lastly, they carried their equipment:

Equipment consisted of the standard web belt; cross-braces; pouches worn brassière fashion; small pack containing two mess-tins, pialla (enamelled mug), knife, fork, and spoon, housewife with needle and thread, water purification pills, mepacrin (to ward off malaria, which it didn’t), and any personal effects you felt like carrying, plus your rations; a pint water-bottle; entrenching tool, a steel mattock head with a detachable handle; and a log-line, a five-yard coil of thin rope. The last three items hung from the belt behind. A small trouser pocket contained a field dressing, but everyone scrounged a spare one because the gauze made a splendid sweat-rag-cum-neckerchief. Weaponry was equally simple. There were a few tommy guns (but none of the hated Stens, the plumber’s nightmare) in the company, but the standard arm was the most beautiful firearm ever invented, the famous short Lee Enfield, either of the old pattern with the flat backsight and long sword bayonet, or the Mark IV with the pig-sticker, a nine-inch spike with no cutting edge. The old pattern, which I carried, was the great rifle of the First World War, which the Old Contemptibles used with such speed and skill that the enemy often believed they were facing automatic weapons, and one German general told of how his division had been “shot flat” by its disciplined fire. It held ten rounds with its magazine charged, and another up the spout, had an extreme range of close to a mile, and in capable hands was deadly accurate up to four hundred yards.

Apart from the bayonet, the other essential sidearm was the kukri, the curved short sword of the Gurkha, slung behind the right hip. Mine cost me ten rupees, and some swine pinched it near Rangoon. The alternative was the dah, a long, broad-bladed machete. In one pouch you carried two armed 36 grenades (Mills bombs), and these posed a problem. A grenade has a split pin holding in place an arm which, when the pin is withdrawn, releases a plunger which causes havoc with a fulminate of mercury detonator; depending on the internal fuse, you then have five or seven seconds to get rid of the thing, or good night, sweet prince.

In the other pouch were two Bren gun magazines, holding between 25 and 30 rounds, for the section’s light machine-gun; rifle and Bren ammunition being identical. (Id. at pp. 20-22.)

Fraser, who wrote this autobiography in the 1980s, ended his description of a British soldier’s clothing and gear by comparing it to what a modern soldier wears and carries:

To my eye the loose camouflage blouse is ugly, clumsy, and ill-fitting compared to our tight shirt and trousers; it might have been designed to catch on snags and hinder its wearer, and as if that wasn’t enough, the poor infantryman is festooned with more kit than would start a Q.M. store. I’m sure it’s all necessary; I just can’t think what for. I don’t like the helmet, and suspect it cramps head movement. Very well, I’m old-fashioned and ignorant, but I hold that a streamlined soldier is better off than one who looks as though he has been loosely tied in the middle, and I’d hate to try to crawl through a hedge or swim a river in that lot. Perhaps if those who design the Army’s equipment had to do either of those things, they’d come up with something better. (Id. at p. 23.)

Just a couple of days after having read the above passage, I came across this poster on the internet: 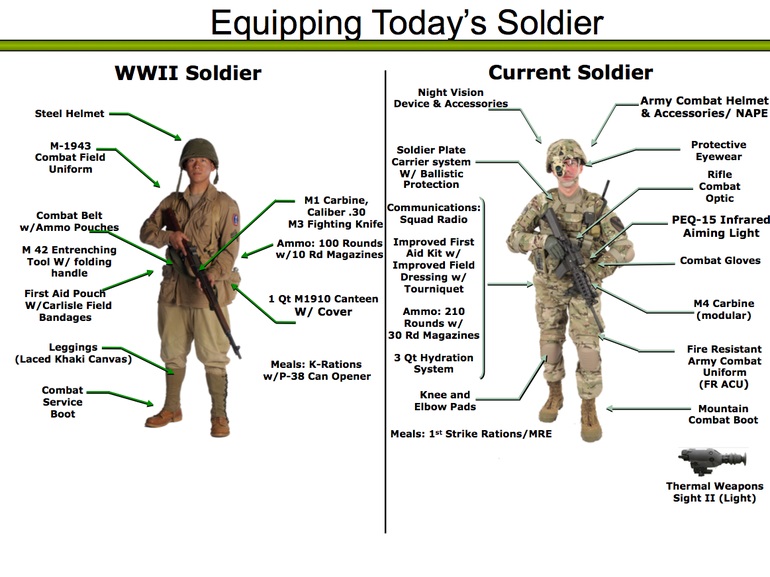 Any opinions on which is preferable as a matter of principle? I fully understand that we have different equipment today, not to mention better medical kits, but would the average infantryman be better off if he was less weighed down or are the modern accouterments worth the bulk and weight?  (And keep in mind that Fraser seems to be describing an even more close-fitting uniform than is shown above.)