One of my Democrat Facebook friends put this poster up on her feed: 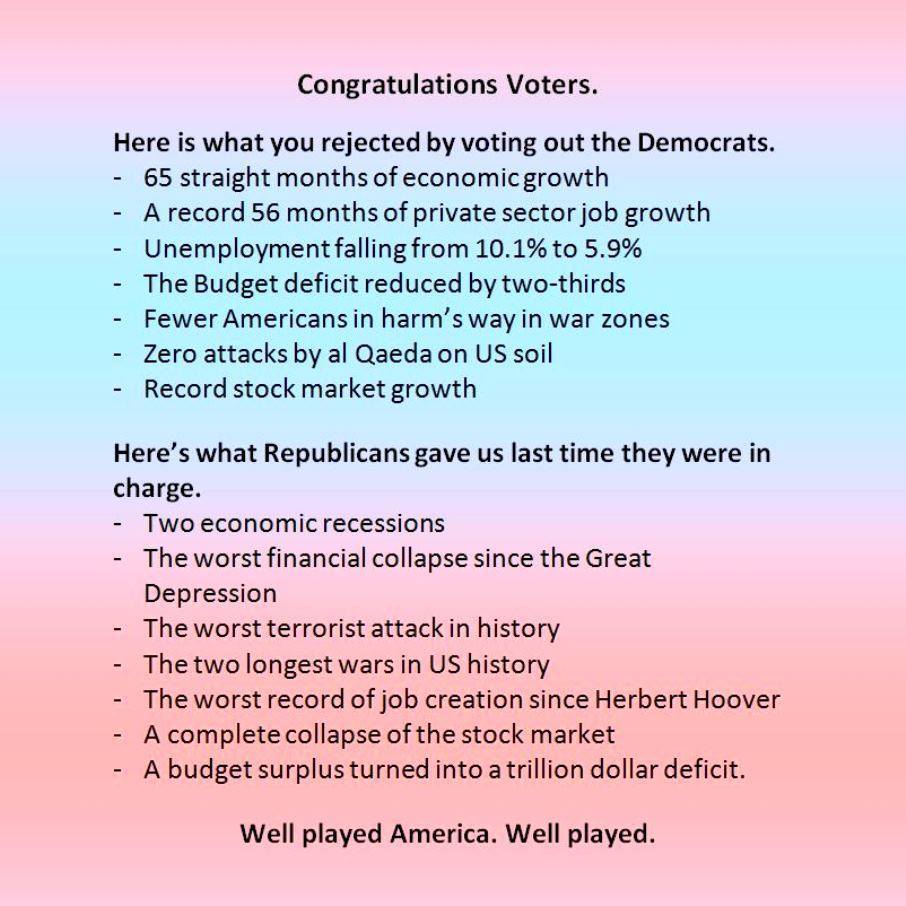 It’s a fascinating looking-glass view at the world, insofar as it sums up most of the last 14 years in a way precisely the opposite of the way in which conservatives see those years.  The praise for the Democrats is like looking at the glassy surface of a pool, only to discover the rot that lies beneath it.

I.  Let’s see what lies beneath those “Democrat miracles”:

A.  The 65 straight months of economic growth  is a chimera, existing only because Quantitative Easing and the Stimulus artificially pumped money into the economy.  After all, if the government keeps printing money (not creating wealth, but printing money), it’s got to go somewhere.  The flip side of this “growth” is that people like my mother, who have only savings and no income, are having to deplete their principal because they’re not earning any interest.  Obama’s cronies are enriched, while the rest of us see our life savings devalued.

B.  When it comes to the claim about 56 months of private sector job growth, let’s just say I’m suspicious.  In December 2013 (which was about 44 months into the Obama administration), the Daily Caller noted that competing studies show consistent declines in job growth.  Even before Gruber gleefully admitted to the lies the administration tells, I was always more likely to believe opposing studies, rather than government numbers.  As best as I can tell, the only real growth is in those states that have thumbed their nose at Keynesian economics (e.g., Texas) or that have oil or other major resources on private land (e.g., North Dakota).

C.  Ah, those magical unemployment numbers which are achieved by pretending that the labor market hasn’t shrunk dramatically and unnaturally.  In fact, there’s been a massive contraction in the job market.  If one looks at the number of able-bodied Americans who could and should be working, versus the number who still bother to show up, the unemployment rate is a dismal:

Regardless of reasons, the net effect of a steadily rising adult population and sharply falling labor force isn’t pretty. It’s as if 217,000 adults joined the economy during the last month and yet made no attempt to help out. And on top of that, an additional 98,000 who were doing something in August also halted any attempt to pull a handle on our economic wagon in September. The headline number released last week – 248,000 new jobs created during September – pales in comparison to the much larger exodus of job seekers from our labor force.

D.  Yes, the budget deficit is gone.  But….  Correct me if I’m wrong here but, in significant part, the reason it’s gone is because the government has been printing money like crazy.  If you both owe the money and print the money, you pretty much have that magic trillion dollar coin that Paul Krugman thought was so exciting.  Printing funny money is a magic trick, not true deficit reduction.

E.  Yes, there are fewer Americans in Iraq, and the number has declined in Afghanistan — but that’s because Obama declared the wars over and scuttled out of there.  However, with the absolute number of overseas troops declining, if you’re a Democrat, you can comfortably ignore the fact that more than 73% of all war deaths in Afghanistan occurred on Obama’s watch.  You can also ignore the fact that Obama’s precipitous withdrawal from the Middle Eastern scene is a contributing factor (perhaps the contributing factor) behind the hundreds of thousands of dead civilians in Syria, and the rapidly increasing number of dead civilians through Africa and the Middle East thanks to ISIS’s ascendancy.  It’s reasonable to believe that, as the world gets more dangerous, more Americans will die but, rather than dying as fighters, they’ll die as victims.

F.  I had to laugh when I read about zero attacks by al Qaeda on US soil.  That’s such a bait and switch.  The fact is that jihadists are getting more aggressive all over the world, including in America.  It’s true that there hasn’t been another 9/11 style attack — but that was true also for the entirety of George Bush’s presidency after 9/11.  On Obama’s watch, terrorist attacks have increased in number:  the Fort Hood attack, the Boston Marathon bombing, the Times Square bombing attempt, the NY Subway Hatchet Attack, the beheading in Oklahoma, and a whole host of other explicitly Islamic-related murders on American soil. Let’s just say that I feel the Islamists constantly encroaching on what they perceive as a weakened, even defenseless, American public.

G.  Record stock market growth — again, it’s easy to do if you just keep printing money.  This is a bubble.  There is no wealth creation going on.

II.  And what’s true regarding those alleged Republican failures:

A.  The claim of two economic recessions:  The first recession hit at the end of Bill Clinton’s presidency.  Bush immediately pushed for and received a tax cut.  It was so effective that the recession ended despite the 9/11 terror attack.  The second, big recession, definitely occurred on Bush’s watch.  It started in the housing sector.  What the Democrats like to ignore, though, is that beginning in 2006, when he had an entirely Democrat Congress, Bush fought desperately to enact laws that would have prevented the housing collapse, which in turn triggered the economic collapse.  So, we had two recessions that resulted from Democrat-led policies, only one of which went away, thanks to Republican-led tax cuts.  The second recession, with its double and triple dips, is a result of Obama’s crony Stimulus, followed by a series of attacks on the American economy, such as the funny money of Quantitative Easing and the takeover of 1/6 of the American economy with Obamacare.  We’re now getting ready to see the third attack on the American economy, in the form of mass amnesty, bringing with it severe drags on American wage earners.

B.  The claim about the worst financial collapse since the Great Depression:  The answer to that is in item II.A., above.

C.  The claim that Bush presided over the worst terrorist attack in history:  9/11 was indeed the worst terrorist attack in American history.  What Democrats like to forget is that it came after eight years of Bill Clinton, and only nine months of George Bush.  There’s a great double standard in effect here, one that allows Obama to walk away from everything that occurred on the six years of his watch because “It’s George Bush’s fault,” but that says, that a terrorist attack that probably took years to plan was the fault of the man in office less than a year, rather than the fault the dysfunctional administrative state that Clinton bequeathed him.

D.  The claim that Bush presided over the two longest wars in US history.  First, Bush only presided over wars that lasted six years, which makes both shorter than the American Revolution.  But yes, they  have been long and they’re about to get longer.  There are a few reasons for the fact that, under anti-war Obama, they’ve kept going and going:  (a) Unlike past American wars, we are not fighting a nation, which is a type of war that can be confined to borders and armies, but are, instead, fighting a far-flung ideology; (b) we got off to the wrong foot in Iraq, and it took years to figure out the Surge; (c) the war was fought just as viciously, if somewhat less bloodily, at home, with a ferocious anti-War crowd working desperately to undermine American military efforts; and (d) Barack Obama undid all of the good work by refusing to leave a contingent force in Iraq (although we did just that in Japan and Germany, for decades) and then, in Afghanistan, announcing preemptive defeat by informing the Taliban of the precise date on which America was pulling out, with no regard for victory.  I’m not saying that Bush should have gotten us into these wars; I’m just saying that the Democrats haven’t been of any help in getting us out and, as ISIS and a resurgent Taliban show, they’ve done a great deal to make the situation worse.  It’s also worth noting that Obama got us into war in Libya, has been waging an undeclared war in Pakistan, and is about to get us into war against in Iraq.

E.  The claim that Republicans have the worst record of job creation since Herbert Hoover.  This is the flip side of numbers I.B. and I.C. in the “Democrats are wonderful” section.  The Obama administration sings paeans to its wonders, but the record shows that the economy and labor market have shrunk dramatically under Obama.  If Bush was the worst job creator between Herbert Hoover and the year 2000, Barack Obama has managed to sink everything to new lows.

F.  The claim that Bush presided over a complete collapse of the stock market.  Yes, it did collapse.  Bush could probably have averted the collapse with his efforts to change the housing market — but Democrats roundly and soundly rebuffed his efforts.  The collapse might also have been ended quickly if Bush had done precisely what he did in 2001 — enacted a tax refund.  Thanks to the Democrats in control since 2006, that didn’t happen — and still hasn’t happened.

G.  The claim that Republicans turned a budget surplus into a trillion dollar deficit:  I do not take on faith numbers in the poster, above.  I will just say that Bush utterly failed to rein in spending (especially when Congress turned entirely Blue), and Obama has made the situation infinitely worse.  Both presidents and their parties should hang their heads in shame.

If any of you have any further arguments, facts (including countervailing facts), or things you’d like to add, please chime in.

(It tells you something about my day that I’ve been working on this relatively short, easy post since 10 this morning.)