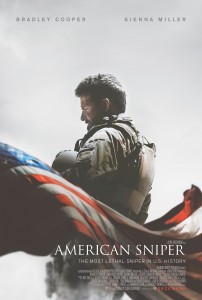 I haven’t yet seen the movie American Sniper, but I have read Chris Kyle’s autobiography, on which it is based. I therefore believe that I am qualified to write on the topic.

I have to begin with the fundamental premise, one that drives the Left nuts, which is that Clint Eastwood, with help from a superb Bradley Cooper, has directed an incredibly good movie, one that doesn’t shy away from war’s ugliness, but that acknowledges, not just the physical bravery of our men, but also their moral decency.  As I try endlessly to explain to anybody who can listen, both good guys and bad guys kill. After all, no one will deny that a woman has acted bravely and honorably if she shoots to death the man trying to kill her child. Likewise, only sadistic psychopaths will applaud the broken bodies of Christians, Jews, women, children, gays, blacks, and the “wrong” kind of Muslims that ISIS, Boko Haram, al Qaeda, and other Islamic Jihad organizations leave in their wake.

Let me fall back here on my already wordy poster, one that’s targeted at the buffoonish Seth Rogen, but that addresses the larger issue, which is that why one kills matters as much as the fact that one does kill: 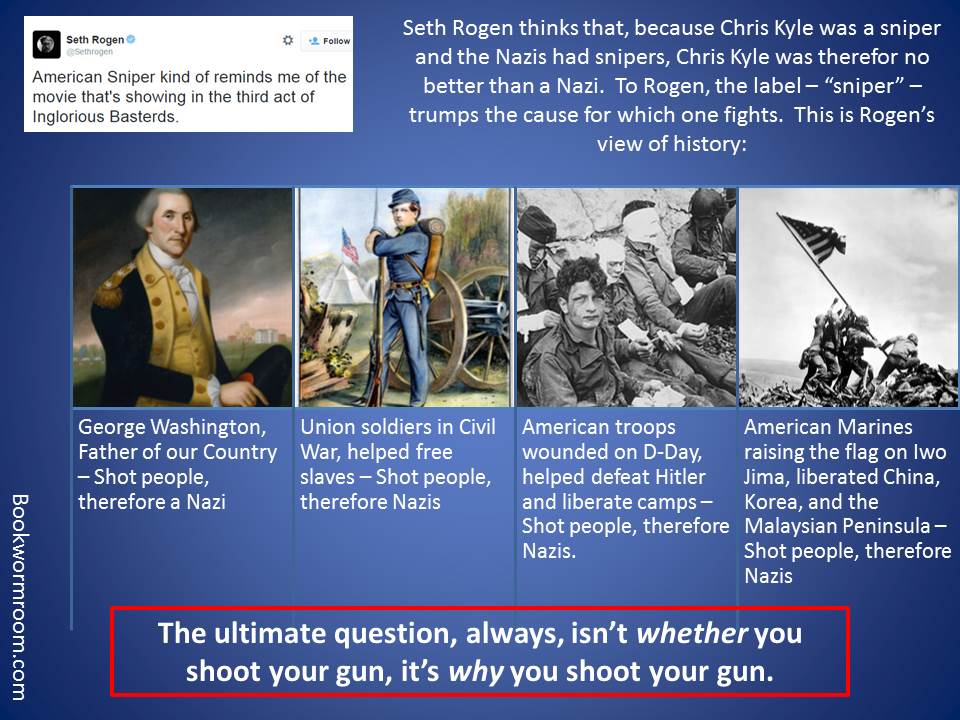 (I also won’t waste time in this post correcting the innumerable personal slurs the Left is now hurling at Chris Kyle, most of which are based upon a failure either to see the movie or read the book. Ian Tuttle, thankfully, takes care of setting that record straight.)

Mentioning Seth Rogen, though, leads me nicely back to the point I want to make in this post, which is an observation I first made to my friends on the Watcher’s Council: namely, that American Sniper has been remarkably effective at flushing weasels out from under cover, proving that good art frequently has multiple virtues.  For example, one of my neighbors, a nice, but rather brittle, angry woman, whose life has not treated her with the generosity she was raised to expect, posted the following image on Facebook:

Doesn’t that ugly, mean-spirited poster sum up just about everything that’s wrong with the Leftist view of the world? The wrongness of it all begins with the terrible slur against Kyle and all the other American troops who have fought against the same type of men who are now crucifying, raping, beheading, and generally rampaging their way across the Middle East, with occasional detours into Europe.  I know those men.  My Dad was one.

Really, there’s no sugar-coating it.  For five years of his life, my Dad was a hate-filled killer.  He poured  his energy, brains, skill, and courage into slaughtering as many people as he possibly could.  If he could have killed more, he would have.

In case you’re wondering, Daddy wasn’t Dexter or Charles Manson or Stalin.  Instead, he was an ordinary foot soldier in WWII, fighting with the RAF and ANZAC in the Mediterranean theater.

During all those years of fighting, mostly in North Africa with detours into Greece and Crete, Daddy wasn’t glorying in slaughter for the thrill of it.  He didn’t kill to slake blood lust or because he was a racist.  In fact, quite the opposite.  He was killing because he understood the stakes, which was to stop the spread of genocidal racism:  If he didn’t do his bit to halt the Nazis in North Africa, those same Nazis would descend on Palestine, and with the help of the enthusiastic ancestors of today’s ISIS, have slaughtered where they stood every Jewish man, woman, and child in the British Mandate of Palestine.

Chris Kyle and his comrades, as Kyle made clear in his book, didn’t kill Iraqis because they took a sadistic glee in a human turkey shoot.  They killed specific Iraqis who were bound and determined to kill the Americans (which is ground enough to want to kill the Iraqis first) and, moreover, who were equally bound and determined to put into place precisely the ideological governance we now see in the Middle East with ISIS and in Nigeria with Boko Haram.

Ultimately, Kyle and his comrades were killing humans fatally infected with a deadly ideological disease.  These men understood (and, wherever they still fight, understand) that people infected with genocidal, imperialist, tyrannical values need to be exterminated just as surely as we kill a rabid dog or, 70 years ago, as we killed rabid Nazis.  Unfortunately, the reality of war is that, when we kill the guilty, we sometimes kill the innocent.  My Dad knew that, amongst the Nazis he was fighting were ordinary Germans who were forced by circumstances to fight for those same rabid Nazis.

Knowing that didn’t stop Daddy, or any of the other Allied troops.  They understood that this is how the world works.  (For more of my thoughts on that specific topic, you can check out my annual Passover post.)  As Daddy once said, you cannot fight a war if you don’t hate your enemy — by which he meant if you don’t hate the values your enemy seeks to advance.

So, clearly, one level of Leftist stupidity is its members’ complete inability to understand that soldiers can hate the ideology without doing the Leftist thing and turning everything into some agonized Greek tragedy about racism, sexism, homophobia, and third world victimization.  Smart people are able to winnow out good from bad, and they know in which directions to aim their guns.

But there’s a second level of stupidity at work in that ugly, mean-spirited poster, and that’s the stupidity that is unable to comprehend that, without the sheepdogs, the sheep aren’t able to go around sweetly and smugly ministering to the less fortunate among them.  Please believe me that I don’t intend to be snide about charity.  I think charity is a wonderful thing, provided that it’s not forced upon people through government coercion.  It’s one thing for me, while exercising my values, to donate my time, money, and labor to aid those less fortunate than I.  It’s another thing entirely when the government, with a gun aimed at my head, announces that I’ve volunteered to donate 50% of my annual income to help those that the government deems should be recipients of government beneficence.

Putting aside my irritation at a government that denies me the opportunity to redistribute my own wealth, let me get to the real issue and the real stupidity behind that poster:  There is no charity when there is no civil society.  Charity works when society is sufficiently stable, free, and predictable that people can actually earn and keep money — and then give it away if they want to.  A strong, infrastructure underlying a free, market-based society creates both extra time and extra wealth, not to mention a capacity for empathy that is utterly lacking when people are suffering under either complete anarchy or sadistic, malevolent totalitarian rule.

You, my dear, smug Leftists, are able to boast in self-aggrandizing tones about your ability to shake down hard-working citizens only because men like Chris Kyle are willing to do the dirty work of keeping both tyrants and anarchy at bay.  You’re like the person who dines in style on the steak, but sneeringly describes as a hillbilly the rancher who raised that cow and as a murderer the butcher who got that lovely filet mignon to your table.

Great art not only opens our minds, but it enable us to see with clarity those minds that cannot and will not open.  People who value freedom understand that there’s a price to pay for freedom’s blessings and we are appropriately and eternally grateful to those who are willing to do the dirty work that goes with paying that price.

Radical, jihadist, fundamentalist Islam (or whatever other nouns and adjectives you wish to apply to the 10% of the world’s Muslims who seek only to destroy) must be destroyed, lest we are all destroyed.  My problem is that I’m a tiny middle-aged Jewish woman, who is a great target, but a lousy fighter.  I live because Chris Kyle, and the SEALS, and the Marines, and the Navy, and the Army, and the Air Force put themselves in front of me, as a living barrier protecting me from the abyss.

I pity those people who don’t appreciate the gift they’ve been given, and do nothing more than set themselves up as the socialist twins to those murderous Islamists that the Kyle’s of this world fight.  Because, really, once you strip away those smug words about the personal virtues of government funded charity, you discover that the Left and the Islamists are pretty much the same people.  It’s just that the Islamists have gone further down the path necessary to achieve their ultimate ends: 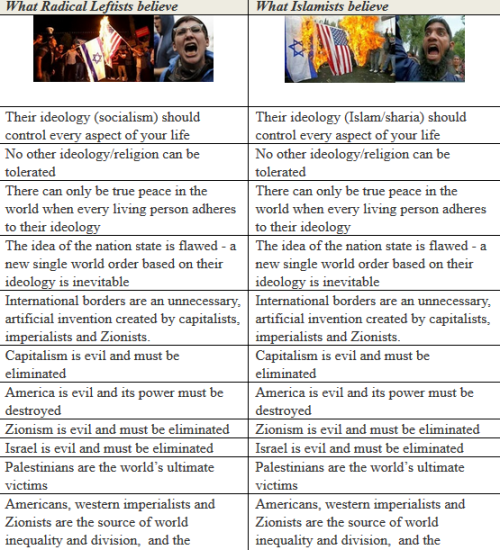