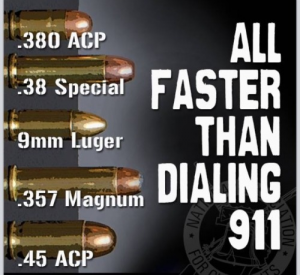 I have been engaged engaged in a running battle . . . er, discussion with a Progressive acquaintance about the Castle Doctrine.  This is the doctrine derived from the ancient Anglo-Saxon principle that “a man’s home is his castle” and he has a right to be safe within its wells.  In practice, the Castle Doctrine means that, if someone breaks into a home, that person is presumed to have lethal intent, giving the homeowner the right to use lethal force in his defense.

As I detailed in an earlier post, my Progressive acquaintance simply can’t wrap  his mind around the whole notion of “presumption.”  To him, it means “permission” and, flowing from that gross mis-translation,  he interprets this permission to mean that, in Castle Doctrine states, a homeowner can, with impunity, shoot anyone on his property.

Yesterday, I sent the Progressive the news story about a 14-year-old boy who was staying with his grandmother when, late at night, a man smashed a window.  When the teen challenged the man, the man ignored him and continued to try to break into the house.  The teen shot the man — 18-year-old Isai Robert Delcid — three times, killing him.

The man’s 22-year-old brother, Carlos, drove away, only to be arrested later. You won’t be surprised, I’m sure, to learn that Carlos Delcid not only had a record, but was “already out of jail on pretrial release for a prior burglary.” That last bit of information tells me that the Castle Doctrine’s presumption — that people who break into a house are up to no good — is reasonable.

I forwarded the story to the Progressive, who was appalled. “That 18-year-old didn’t deserve to die,” he said, “just because he broke into someone’s house.”

“But, but,” I sputtered, “what if he had tried to kill the boy (whose father had already been killed by armed robbers)?”

“He didn’t try to kill anyone, so he didn’t deserve to die,” said the Progressive.

“Homeowners,” he said immovably, “shouldn’t have license to kill people in their home.”

It was at this moment that I realized I’d run into one of those walls of ignorance Progressives hide behind when it comes to arguments about gun rights.  This barrier is one I’ve mentioned before: Gun-grabbers are incapable of imagining those whose lives are saved by guns. Instead, they see only those who were killed by guns.

For example, if you point these Progressive myopics to a story about an off-duty deputy who was able to stop a mall shooter, they’ll refuse to acknowledge that a gun saved lives.  Instead, you’ll start hearing silly statements, such as “The shooter’s aim was bad, so he wasn’t going to kill anyone anyway.”  To the gun haters, a story without dead bodies is no story at all.  We Second Amendment people are different.  We count the people at the mall who didn’t die once the deputy took out the shooter.

Likewise, when I look at crime statistics showing that legally-armed communities have a lower murder rate than gun-controlled communities, I think of all those law-abiding citizens in that community who sleep safely in their beds at night.  Those “not-dead” people are real numbers to me.

The gun control advocates cannot see these non-victims.  They have no ability to acknowledge their numbers, let alone tabulate them.  For that reason, they are unable to compare “Second Amendment Community A” against “Gun Control Community B.”  Because they cannot comprehend that which they cannot see, they deny that the Community A has an absence of dead that shames Community B.  All that Progressives see are the bodies stacked in Community B.  They then draw their myopic conclusion:  a little gun control didn’t work, so more will be better.

This running “gun battle” with my Progressive acquaintance popped into my head when I read the follow-up to a story about gun rights here in Marin County.  Almost a month ago, I wrote about something amazing that happened in our Superior Court:  the judge ruled against a prosecutor who sought a judicial indictment against James Simon, who had shot William Osenton when the latter followed Simon’s car for miles and then, after Simon pulled into his own garage, followed right into the garage after him, got out of the car, and headed for Simon’s house.  Despite Simon’s warnings (both verbal and a warning shot), Osenton was undeterred, so Simon shot him twice in the stomach.  Osenton survived the shooting.

The Prosecutor’s take  in the preliminary hearing was the same as that advanced by the Progressive:  With a scary guy chasing you right into your garage, and then getting out of the car and storming towards the house, all that you are allowed to do is hide in the house, call 911, and hope that the police come in time.

We can call the Progressive’s and the Prosecutor’s take the anti-Castle Doctrine:  Seconds may count, but you’d better politely wait several minutes until the police arrive, based upon the gun-grabbers’ unswerving presumption that anyone threatening you and/or trying to break into your house is, more likely than not, a pacifist who wants to sit down with you and discuss world peace through disarmament.

Unfortunately for Dr. Simon, the prosecutor didn’t let the matter rest after the judge said no.  Instead, he decided to bring out the heavy guns [pun intended], and have a grand jury decide whether to indict Simon.  The grand jury did, which isn’t very surprising given that the prosecutor had before him 19 upstanding Marin County residents:

Prosecutors could have refiled the case and brought it before a different judge. Instead, they took it to a grand jury comprised of 19 residents, which heard the prosecution’s case without rebuttal or cross-examination by the defense.

“I think it was the wrong decision and sends a wrong message to our community,” Berberian said. “I think a jury should look at this case.”

Assuming an honest judge, Berberian may find he has a tough row to hoe. You see — and this is something that would shock and horrify my Progressive acquaintance — California is also a Castle Doctrine state. Per Calif. Penal Code sec. 198.5:

Any person using force intended or likely to cause death or great bodily injury within his or her residence shall be presumed to have held a reasonable fear of imminent peril of death or great bodily injury to self, family, or a member of the household when that force is used against another person, not a member of the family or household, who unlawfully and forcibly enters or has unlawfully and forcibly entered the residence and the person using the force knew or had reason to believe that an unlawful and forcible entry occurred.

As used in this section, great bodily injury means a significant or substantial physical injury.

The way I see it, Berberian is trying to reframe the case, not as a homeowner self-defense case, despite the fact that the shooting occurred when Osenton tried to drive into Simon’s garage and then stormed his front door, but as a “road rage” case, which is subject to different legal presumptions. The “road rage” angle, which is what the local paper sells, is that Simon and Osenton got into a tiff follow a minor traffic altercation, and that’s what led Simon to shoot Osenton. This road rage version, of course, leaves out entirely the salient fact that Osenton trailed Simon home and tried to enter Simon’s house. The good thing about a road rage scenario, if one is a prosecutor, is that, at trial, the prosecutor can immediately begin proving murder, without first disproving self-defense.

Incidentally, no one knows what Osenton’s motives were when he followed Simon home and stormed his house. Even Osenton claims not to know, saying that his last memory is of having a medical procedure done earlier in the day. What we do know, though, is that California law (strangely enough given that this is, after all, California) still allows the presumption that anyone breaking into someone else’s home is up to a bit of no good.  Should someone get hurt subsequent to that break-in, it’s better that the person doing the illegal breaking and entering be the one to get hurt, rather than the homeowner.

The above statement is not, as my Progressive acquaintance keeps insisting, a blank check for homeowners to shooting anyone and everyone who dares to get near their property. It is, instead, a careful, and time-tested, allocation of the risk when two people find themselves in the same house — and one of them is there legally while the other is not.

UPDATE: Hey, Ace readers! Welcome. The above is depressing, but if you’re looking something a little more uplifting about guns, I can recommend a fun place to go shooting in Las Vegas….