You and I know that, had Obama seen this picture before the Prayer Breakfast, he wouldn’t have changed his speech by a single syllable. Facts are irrelevant. They must always bow before dogma. But to those of us who like facts, this picture is amazing: 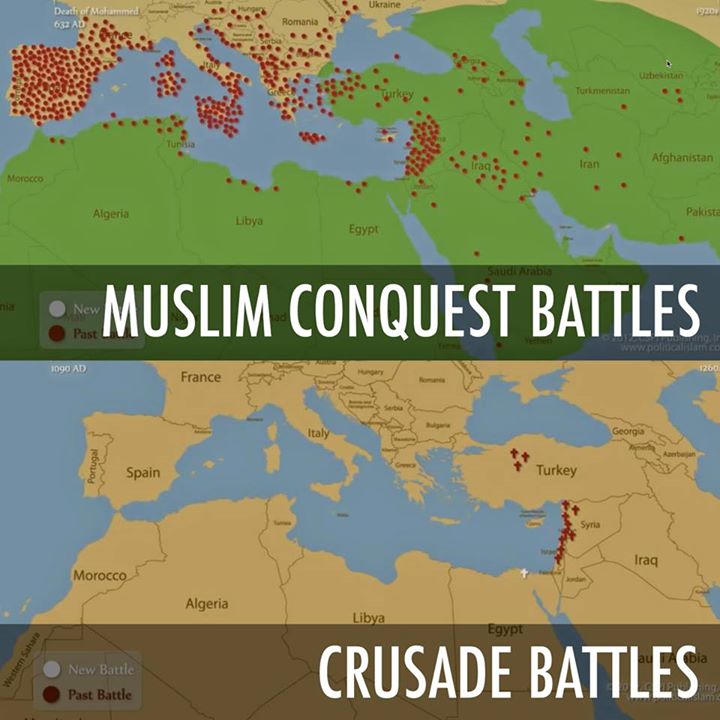 The above, of course, perfectly represents the Bernard Lewis quotation that’s getting so much air time lately:

I would not wish to defend the behavior of the Crusaders, which was in many respects atrocious. But let us have a little sense of proportion. We are now expected to believe that the Crusades were an unwarranted act of aggression against a peaceful Muslim world. Hardly. The first papal call for a crusade occurred in 846 C.E., when an Arab expedition from Sicily sailed up the Tiber and sacked St. Peter’s in Rome. A synod in France issued an appeal to Christian sovereigns to rally against “the enemies of Christ,” and the pope, Leo IV, offered a heavenly reward to those who died fighting the Muslims. A century and a half and many battles later, in 1096, the Crusaders actually arrived in the Middle East. The Crusades were a late, limited, and unsuccessful imitation of the jihad—an attempt to recover by holy war what had been lost by holy war. It failed, and it was not followed up.

Hat tip: A friend who directed me to Dinesh D’Souza’s Facebook page