We’ve seen it over and over again, as a movie cliché or a silly cartoon: The man is caught in flagrante with another women and, defensively, says to his wronged spouse, “Who are you going to believe? Me or your lying eyes?” It is the ultimate definition of cognitive dissonance.

While cognitive dissonance can make for good humor, in the real world, there comes a point when the human brain can no longer tolerate the loud noise of that dissonance. At that point, people have two choices: embrace the crazy or go for reality.

In his beautiful memoir, Fear No Evil

, Natan Sharansky describes the corrosive mental effects of living with overarching government lies. The government touted its incredible economic success, yet for ordinary citizens the reality was that they were living with another family in a small, rundown apartment unit, or that the stores routinely had empty shelves or long lines. Or the Soviet government boasted that it was a free and liberal nation, yet everyone knew that they had better not speak out against it lest they be hustled away on a dark night, tried in a kangaroo court, and sentenced to an eternity in a frozen gulag.

The government’s conduct was the living embodiment of Joseph Goebbel’s “Big Lie”:

If you tell a lie big enough and keep repeating it, people will eventually come to believe it. The lie can be maintained only for such time as the State can shield the people from the political, economic and/or military consequences of the lie. It thus becomes vitally important for the State to use all of its powers to repress dissent, for the truth is the mortal enemy of the lie, and thus by extension, the truth is the greatest enemy of the State.

For Sharansky and other dissidents, life under the Big Lie was a malevolent clown house, with warped mirrors and unpleasant surprises around every corner. Reality could too easily become a meaningless construct, as you were repeatedly assured (at the point of a gun) that your empty store was a bountiful paradise and your fearful glances over your shoulder were just the inevitable price of “freedom.” What saved the dissidents from the insanity of cognitive dissonance was this:

Let us be aware that while they preach the supremacy of the state, declare its omnipotence over individual man, and predict its eventual domination of all peoples on the Earth, they are the focus of evil in the modern world.

It was C. S. Lewis who, in his unforgettable ”Screwtape Letters”, wrote: “The greatest evil is not done now in those sordid `dens of crime’ that Dickens loved to paint. It is not even done in concentration camps and labor camps. In those we see its final result. But it is conceived and ordered (moved, seconded, carried and minuted) in clear, carpeted, warmed, and well-lighted offices, by quiet men with white collars and cut fingernails and smooth-shaven cheeks who do not need to raise their voice.”

Well, because these “quiet men” do not “raise their voices,” because they sometimes speak in soothing tones of brotherhood and peace, because, like other dictators before them, they’re always making “their final territorial demand,” some would have us accept them at their word and accommodate ourselves to their aggressive impulses. But if history teaches anything, it teaches that simple-minded appeasement or wishful thinking about our adversaries is folly. It means the betrayal of our past, the squandering of our freedom.

So, I urge you to speak out against those who would place the United States in a position of military and moral inferiority. You know, I’ve always believed that old Screwtape reserved his best efforts for those of you in the church. So, in your discussions of the nuclear freeze proposals, I urge you to beware the temptation of pride — the temptation of blithely declaring yourselves above it all and label both sides equally at fault, to ignore the facts of history and the aggressive impulses of an evil empire, to simply call the arms race a giant misunderstanding and thereby remove yourself from the struggle between right and wrong and good and evil.

Aaaah! The ultimate reality check. Even as their government gas-lighted them, the Soviet dissidents finally heard the truth: they weren’t living in a free land, in the midst of plenty; they were living in an evil empire that controlled, stole from, intimidated, and lied to its people. Ronald Reagan wasn’t the fool the American media painted him to be; he was a truth speaker who saved the sanity of those in the grip of a truly Evil Empire.

Of course, the Soviet Union had an advantage when it came to the Big Lies: Not only did it have the vast powers Goebbels said were necessary to maintain the lie, it also benefited from the fact that people’s worlds are bounded most closely by what they can see and touch. Thus, the state could tell the doubters that, while their daily life might have deviated from the official line, in all other places in the vast empire — places people could neither see nor touch — things were exactly as described in the state-run media. “Yes, the shelves are bare in your town or region, but that’s because you have failed as citizens. In all those other places to which you’ll never travel, the shelves are weighed down by food, courtesy of those who are true communists.”

Here in the so-called “free” West, those who are paying attention have become aware that we’re rapidly becoming the objects of yet another Big Lie from the Left. This Big Lie is the one about sexual identity. This idea was incubated on American college campuses, and is now spreading throughout America thanks to aggressive pressure from the Leftist entertainment world, social media, and mainstream media. We are constantly being told that, not only is sexual preference fluid (you can be lesbian one day and straight the next), but so is the entire concept of “gender.” There is no such thing as male and female. Instead, the Left assures us, these are socially imposed constructs that enslave people.

This idea of “fluidity” crops up everywhere. The word “gay” was long ago replaced by the phrase “gay or lesbian,” which yielded to “lesbian, gay, or bisexual.”  Significantly, all three of these words didn’t describe gender identity but, instead, described behavior:  With whom do you wish to have sex?

To get a sense of how obsessive the Left has become about abandoning the old male-female paradigm, just check out Facebook’s 56 different gender identities:

For those only now catching up with this trend, you need to be aware that the indoctrination starts young. Just today, we learned about a new take on Heidi, the 19th century classic about a young Swiss girl growing up in the Alps. The modern twist is a story about a young Swiss person deciding daily on her chosen Alpine persona:

The new series of Heidi is gender fluid. This unusual film about a child who sometimes feels male, sometimes female, depending on the moment, comes from the Swiss canton Ticino. The idea of making this film came to director Florian Halbedl, Swiss by birth but now living in Canada, who together with his transgender partner, chose the Alps as an ideal setting to talk about an issue they care very much about. Because, as the directors say in the video presentation of the film project, the aim of Limina, as the film is called, is to encourage the acceptance of gender fluid people: those who, from childhood, don’t recognise themselves in the distinct male/female gender, which are so widespread in society.

I’m enough of a libertarian that I can laugh at this kind of stuff and enough of a historian to know that, at all times and places, humans have always had the equivalent of the old-fashioned American pejoratives of “tomboy” and “sissy,” There are definitely people who don’t conform to typical male/female paradigms.

Having said that, though, what happens when society pretends that these personal feelings and preferences entirely negate biological reality? That’s a question on the table in British Columbia, where the “Trans Alliance Society” has filed a petition with the British Columbia Human Rights Tribunal, demanding that it delete from birth certificates the space that asks for a baby’s sex:

“Clinical determination of gender at birth is subject to an error rate that is much higher than people think,” Morgane Oger, chair of Trans Alliance Society, told the Thomson Reuters Foundation by phone.

Activists say that assigning gender at birth is discriminatory and can cause serious harm to transgender people and those who do not conform to strict gender definitions – especially those born with ambiguous genitalia, who may be assigned the wrong gender at birth.

Transgender people suffer from terrible discrimination and are often accused of lying about who they are, or are deemed “insane” because their gender identity is at odds with their identification documents, Oger said.

“This is about saying ‘this information doesn’t belong in that place’ and (that) having the wrong information harms people,” she said.

The same article indicates that around 2% of people in the world feel a gender identity at odds with their bodies. I am genuinely sympathetic to that tiny, tiny, tiny minority.  Heck, I have body confusion issues too, since I routinely expect when I look in the mirror that I’m going to see a 5’10”, young blond, kind of like Heidi Klum. Unfortunately, that’s not what I see, nor is it what all those others see who treat me like a short, middle-aged woman (the discriminatory pigs).

Gentle sarcasm aside, think about it: because of the experience of, at most, 2% of the population, the gender activists want all of us — all 100% of humankind — to pretend that the reality of our bodies, which manifests as different external genitalia, doesn’t exist. Talk about cognitive dissonance.

Moreover, there’s every reason to believe when looking at Western pop culture that this whole “gender fluid” theory is making headway. I mean, if Miley Cyrus embraces it, you’ve pretty much seen your whole society go to the dark side:

Gender fluid persons are people viewing themselves as both male and female. They see in themselves the attributes of both sexes but hardly alter their physicality the way they were born.

And here’s where I loop back to the starting point of this post, which is the cognitive dissonance that defined the Soviet Union: I am certain that this aggressive PR push is going to result in changed birth certificates, school textbooks, children’s literature, PBS children’s shows, Disney channel stars, and everything else that can be done to convince the up-and-coming generation of young people that there is no such thing as fixed gender identity. Heck, anything the Soviet Union could do in the way of Big Lies, we in America can undoubtedly do better.

The problem I see for these activists is one of cognitive dissonance. We are not facing a situation in which people who challenge the party line version of reality can be told “Well, you disgraceful non-conformists may not be enjoying the reality of success, but everyone else is enjoying it.” Instead, we’re facing a situation in which the truth lies in everyone’s own underpants: 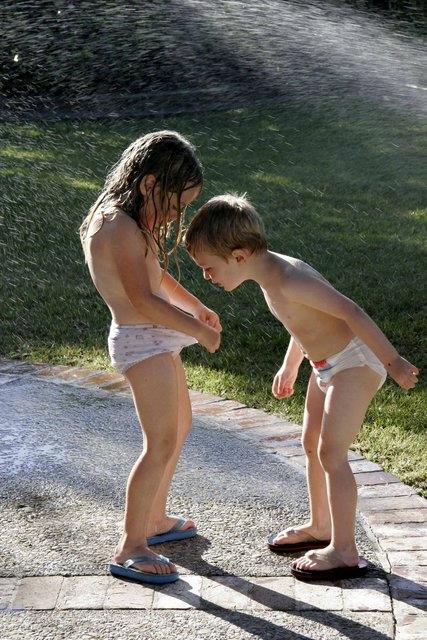 How long do any of you think the Leftists will be able to convince every underpants wearer in America that biological gender is a mere social construct, without meaning and, therefore, without social, moral, economic, or political consequences?  Or put another way, how long will the Left be able to get away with saying to all those children peering into their own and each other’s underpants, “Who are you going to believe?  Us or your lying eyes?”