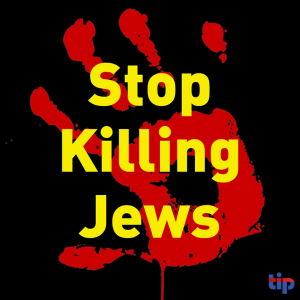 Those who consume only the mainstream media do not know what’s going on in Israel. The media is lying to America through selectively presented news.  News reports are careful to lead with headlines about Palestinians killed or wounded, only mentioning deep in the article that Palestinians met these misfortunes only after they tried to slaughter Jews. Bret Stephens says it best:

If you’ve been following the news from Israel, you might have the impression that “violence” is killing a lot of people. As in this headline: “Palestinian Killed As Violence Continues.” Or this first paragraph: “Violence and bloodshed radiating outward from flash points in Jerusalem and the West Bank appear to be shifting gears and expanding, with Gaza increasingly drawn in.”

Read further, and you might also get a sense of who, according to Western media, is perpetrating “violence.” As in: “Two Palestinian Teenagers Shot by Israeli Police,” according to one headline. Or: “Israeli Retaliatory Strike in Gaza Kills Woman and Child, Palestinians Say,” according to another.

Such was the media’s way of describing two weeks of Palestinian assaults that began when Hamas killed a Jewish couple as they were driving with their four children in the northern West Bank. Two days later, a Palestinian teenager stabbed two Israelis to death in Jerusalem’s Old City, and also slashed a woman and a 2-year-old boy. Hours later, another knife-wielding Palestinian was shot and killed by Israeli police after he slashed a 15-year-old Israeli boy in the chest and back.

Other Palestinian attacks include the stabbing of two elderly Israeli men and an assault with a vegetable peeler on a 14-year-old. On Sunday, an Arab-Israeli man ran over a 19-year-old female soldier at a bus stop, then got out of his car, stabbed her, and attacked two men and a 14-year-old girl. Several attacks have been carried out by women, including a failed suicide bombing.

What’s going on is a fraud against Americans’ knowledge and intelligence, as well as against their ability to participate properly in our representative democracy.

Two videos emerged from Israel today which give just a feel of the violence ripping through that small, pluralist, democratic, quite civilized little country:

WATCH: Raw footage of the moment of terror when a Palestinian attacks two Israeli security officials. Israel has faced a wave of stabbings this week — but the world is silent. Israeli civilians and officers are left alone to defend themselves and each other. —> Demand action against Palestinian terror. Add your name at IsraelIsUnderAttack.com

(If the above video doesn’t load, view it here.)

WARNING: Graphic contentThis morning, a terrorist went on a violent rampage in Jerusalem with a vehicle and a butcher’s knife. This is the danger we face. This is the result of Palestinian incitement.

(If the above video doesn’t load, view it here.)

And where is Obama?

Dumisani Washington, who is not Jewish but supports Israel, has the answer:

Did you read/see the President’s statement condemning the Arab Palestinian violence and murdering of Jews in Israel?Me neither. #RebuketheOppressor

Incidentally, the use of the knife, and the world’s silence, are not new. Here’s a shocking picture from 1947 — before there was an Israel, before there were 1967 lines, and before the PLO had even formed — showing an Arab stabbing a Palestinian journalist, even as the British watch quietly from the sidelines. (My long-standing fondness for the British and their history took a deep, deep nosedive when I realized how much they contributed to the Muslims’ and Arabs’ fanatic anti-Israel activities.) 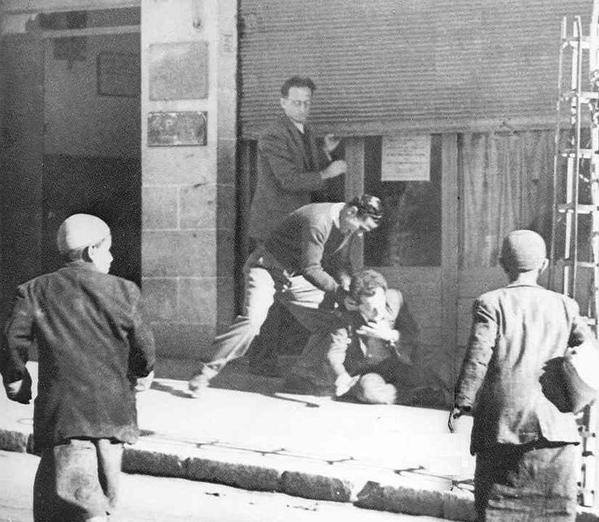 Before Israel united Jerusalem in 1967 and regained the Temple Mount and Al Aqsa, before the re-establishment of the state of Israel in 1948, Jews were in Israel, and Jews in Israel suffered under terrorist attacks even then.

This photo, from 1947, is of an Arab stabbing a Jewish journalist, Asher Lazar, in Jerusalem, while British forces looked on and did nothing to stop the attack, according to the man’s daughter.

Terrorism is not a reaction to Israeli actions, no matter how right or wrong they are. Terrorism, the terror that we saw today, is the product of the indoctrination of hate. A hate that teaches children that it’s heroic to murder Jews.

Decades have passed but the problem remains. #StopIncitement

And just so you know that the British did nothing, ask yourself where that photograph originated. Yael Lazar, Asher’s daughter, explains:

The man being stabbed is my father, photo was taken by british soldiers who did nothing to stop the attack

There is a full blown intifada going on here and it is accelerating. It is stoked by mullahs, and imams, and children’s TV shows, and UNRWA (which we help fund), and the general culture of the West Bank and Gaza, both of which are the world’s largest, most corrupt, and most deadly welfare states. Israel is bleeding and the world doesn’t even shrug, which would imply that it’s paying some kind of attention. Instead, it ignores entirely what’s happening or, fed by the media’s lies, it blames a very real, very true victim. (None of your “he looked at me funny” victims here. The blood, pain, suffering, and death are real.)

I’ve assembled some of the best posters I’ve found on Facebook regarding what’s going on, since I think they make good points. If you’re active in social media and if you care about Israel, please, please share the posters and videos in this post. Remember, what’s happening in Israel is what happens to any culture unlucky enough to rub up against florescent Islam. Just ask the Christians in ISIS’s path. Or the childr…. Oh, never mind. The children in ISIS’s path are dead. 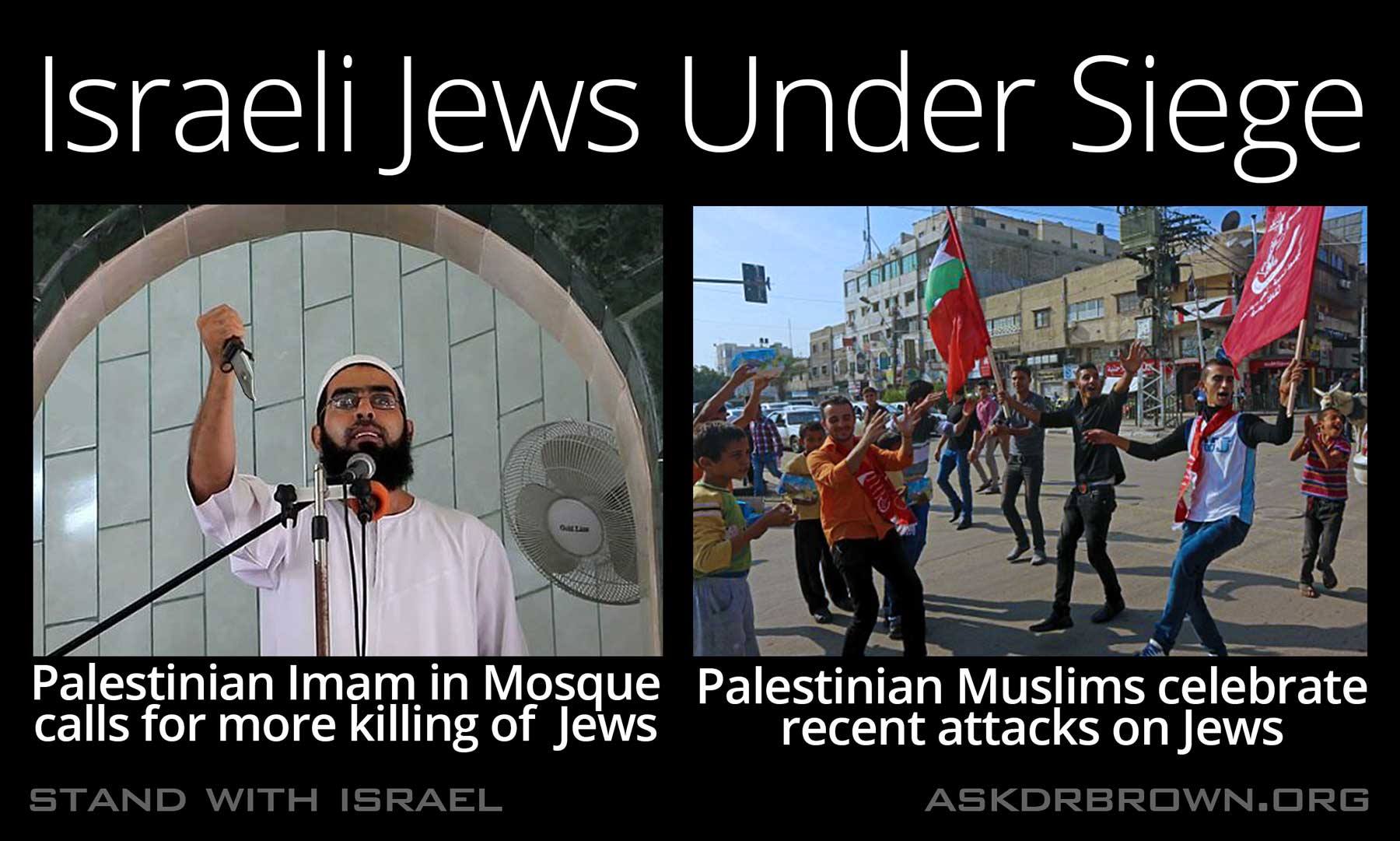 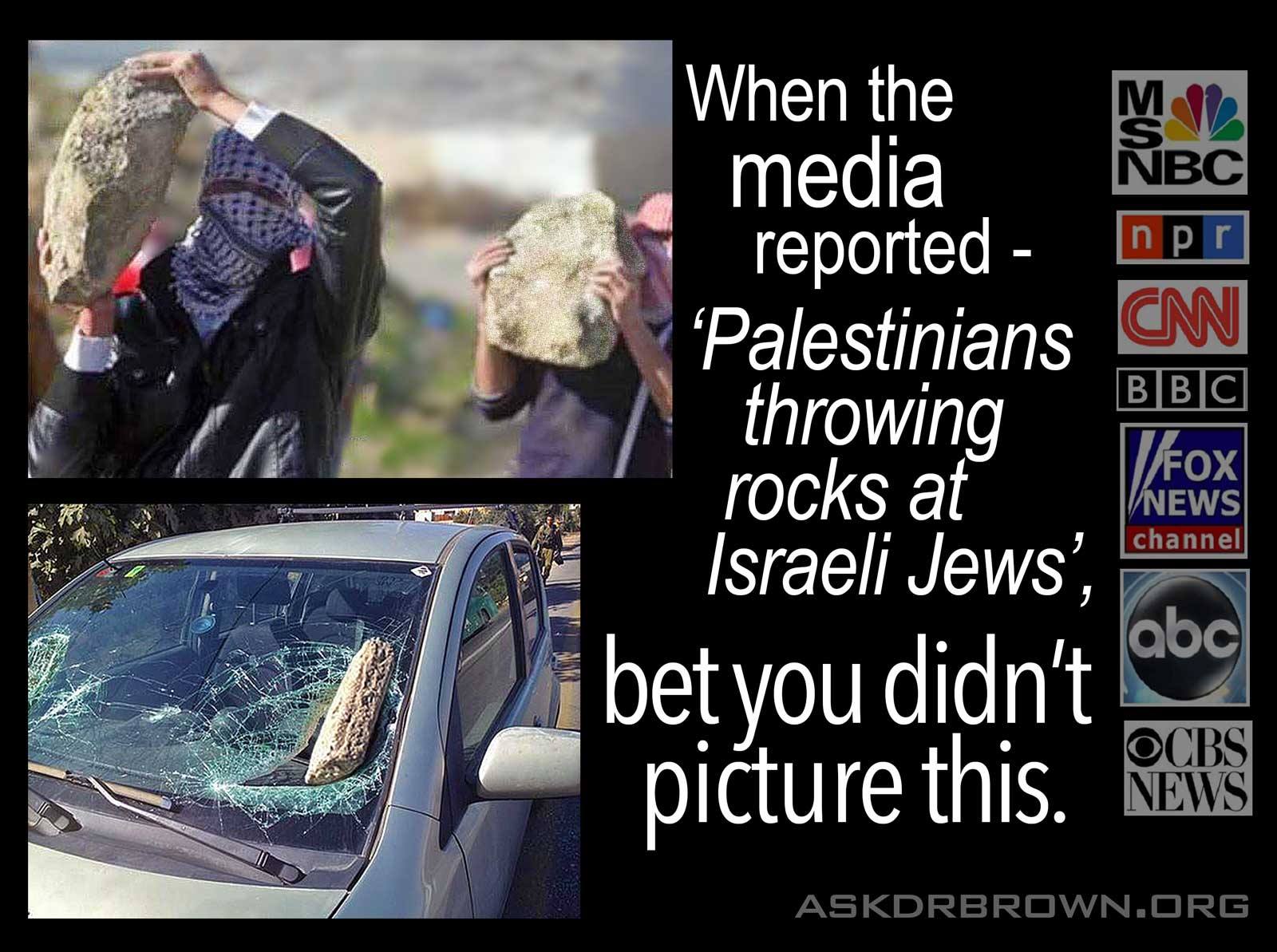 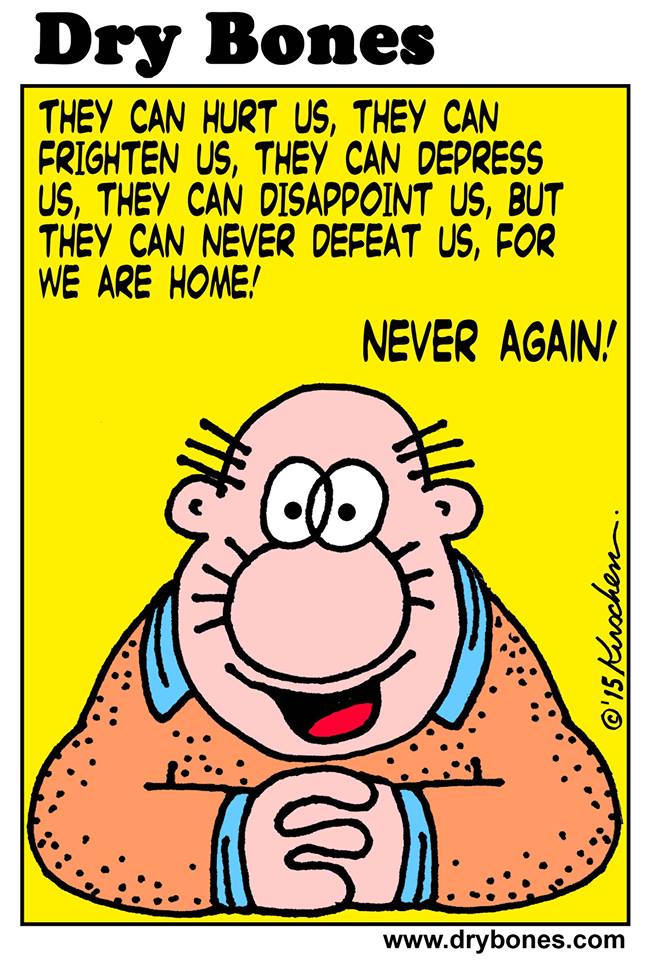 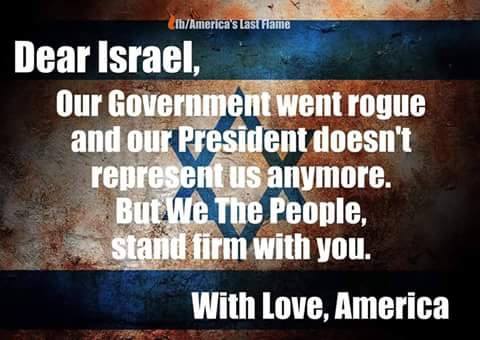 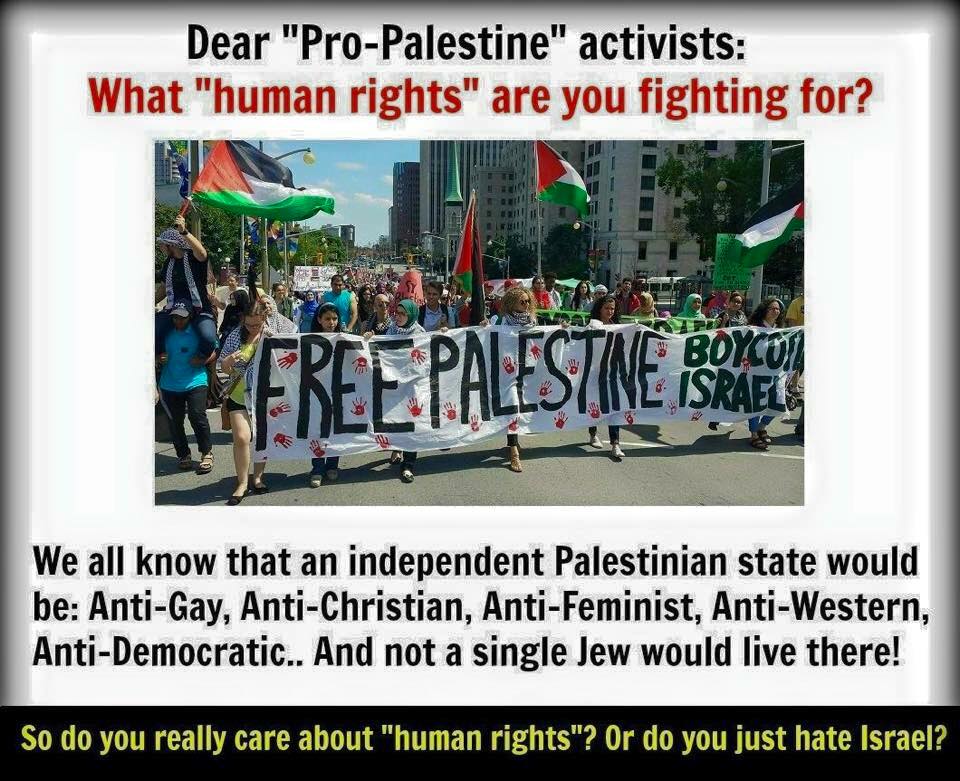 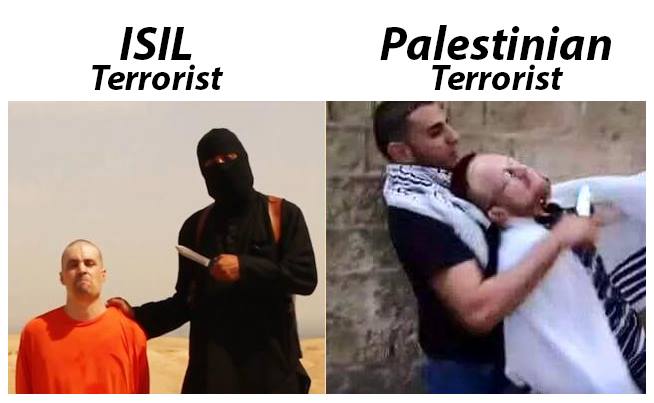 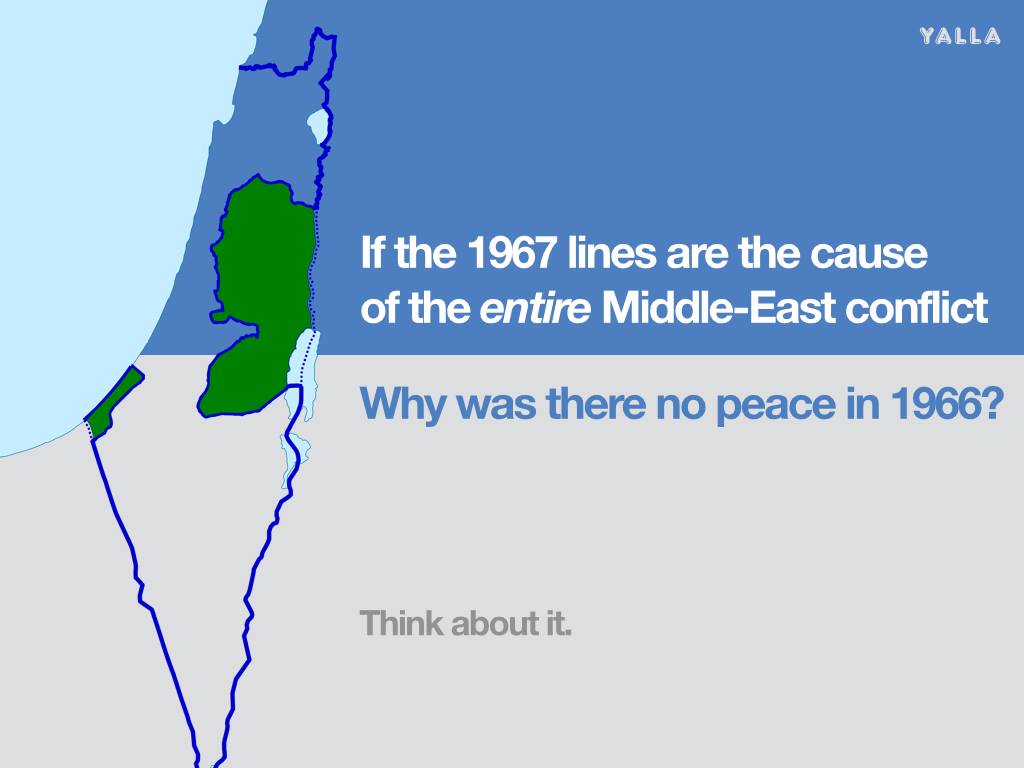