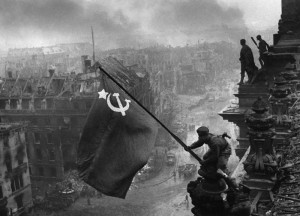 This video is an extraordinary visual representation of the demographic catastrophe that was WWII, as well as the staggering number of individual tragedies that WWII represents. It’s also an uplifting reminder that the world does actually seem to have made some progress.

Because of my obsession with governments that support or deny individual liberty, I also found the video a useful reminder that totalitarian governments view their own citizens as little more than cannon fodder and their enemies’ citizens as even less than that. (Around WWII, the major players amongst totalitarian governments were Germany, the Soviet Union, China, and Japan all of which suffered and imposed staggering military and civilian deaths.) While the Allies during WWII, were certainly less respectful of their enemies’ civilian population than Western armies are today, and they threw more soldiers into the battle than our armies do, when held up against the totalitarian nations’ way of waging war, the Allies still look good, even in retrospect.

Speaking of totalitarian disregard for human life, the video was made in May 2015, so it misses the Syrian civil war and the rise of ISIS. Otherwise seems accurate enough — and certainly jives with my more facile understanding of 20th and 21st century wars around the world.

At 18 minutes, the video is a bit longer than most videos that I usually have the time or the patience to watch, but I found it so mesmerizing, I couldn’t stop:

The Fallen of World War II from Neil Halloran on Vimeo.

You can learn more about the project here.