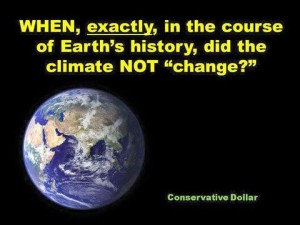 I got an email from PG&E.  I’ve made a few changes and interlineations:

A Message from the California Public Utilities Commission

This month* your utility bill will include a credit identified as the “California Climate Credit.” Your household and millions of others throughout the state will receive this credit on your utility bills.  [Couldn’t they just lower my taxes — which goes up to 13/3% — and not use my money for Leftist propaganda?  Oh, wait!  They can’t.  The state is broke.]

This payment comes from a California program that is fighting climate change. [Hello!  Idiots!  The climate has been changing since the earth’s first birthday.  PBS’s Nova had a great episode on the Vikings and the announcer didn’t even choke when he noted that part of their ability to colonize Iceland and Greenland was because it was much warmer back then.]  Your Climate Credit is designed to help you join in these efforts. You can use the bill savings from your Climate Credit however you choose [at least they’re not mandating how we spend it . . . yet], but you can save even more money by investing the savings in energy-saving home upgrades, including more efficient lights and appliances. You can find more information and receive rebates for these and many other energy-efficient choices for your home at www.EnergyUpgradeCA.org/credit.  [I’m going to use it to offset state, federal, and local gasoline taxes, which add $0.61 to the cost of every gallon of gas sold in California.]

The Climate Credit is one of many programs resulting from landmark legislation called the Global Warming Solutions Act of 2006. Together, these programs are cutting pollution [good], creating jobs [hah!], and investing in cleaner energy and transportation [with transportation bills benefitting the politicians who passed the Global Warming Solutions Act because they get donations from the unions that benefit from the surprisingly few jobs that are created.]. For more information about climate change science and programs to reduce carbon pollution, visit  https://wattsupwiththat.com/.

With California promoting ideology in emails to consumers, I’d like to quote former Soviet dissident Natan Sharansky, from The Case For Democracy: The Power Of Freedom to Overcome Tyranny And Terror

In any place where dissent is banned, society fractures into three groups. One group is composed of those who remain committed to the prevailing order because they agree with it — the true believers. Another group is made up of those who are willing to defy the prevailing order despite the risk of punishment — the dissidents. For members of these two groups, there will be little or no gap between their private thoughts and public statements. Unlike true believers and dissidents, members of the third group do not say what they think. This group is comprised of people who no longer believe in the prevailing ideology, but who are afraid to accept the risks associated with dissent. They are the “doublethinkers.”

Doublethinkers live in constant tension from the gap between their thoughts and words. They always avoid saying what is not permitted but also try to avoid saying what they do not believe. But fear societies generally do not leave their doublethinkers such a luxury. They demand from their “cogs” constant expressions of loyalty. In kindergartens, schools, universities, workplaces, religious institutions, public meetings, and elsewhere, doublethinkers must parrot the ideology of the regime and hide their true beliefs. This constant self-censorship can be such an inseparable part of a doublethinker’s existence that it becomes so habitual that the tension between thoughts and words is almost no longer felt. Indeed, only when doublethinkers are free are they fully aware of the extent of their previous self-imposed intellectual servitude.  (pp. 43-46.)

I quoted the above language because the government is forcing an ideological belief system on consumers disguised as a scientific truism. Reading it, though, it is a reminder that today’s Social Justice Warriors, with their contention that gender is a social construct, not a biological reality; that the Judeo-Christian tradition is a force for evil, not one of the great civilizing ideologies in world history; that Islam is an inherently peaceful religion and that Muslims who commit acts of terror aren’t really Islamic; that women can perform the same as men can in military infantry units; and that people who sneak into our country illegally haven’t actually done anything wrong — all ideas that they enforce with threats of job loss, shrill public humiliation, denied entry to educational institutions, etc. — are Soviet in their behavior and the great mass of Americans are slipping into doublethink when they silently accept these Big Lies.