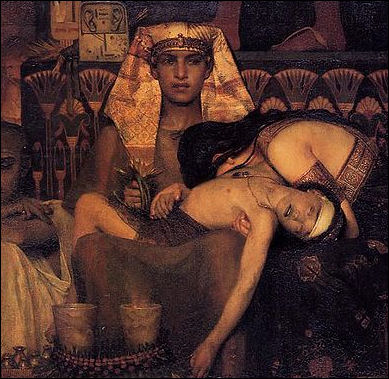 I first published a Passover post in March 2010, when Iran was in the news because of the Green Revolution. The Mullah’s tyranny resonated with me as I thought about the Passover story.  But there’s tyranny in the world every year — in ISIS territory, in North Korea, in Cuba, in Putin’s Russia, and — God forbid — one day we might even see it here in America.  The ordinary lessons we take from the Passover story — the escape from slavery, the handing down of core moral rules, and the birth of a new nation of Israel — are always relevant, but we should never forget the underlying message about the nature of tyranny:

An antisemitic Jew I know, rather than seeing the Passover ceremony as the celebration of freedom (the world’s first and for a long time only successful slave revolt), and of justice and morality (the Ten Commandments), derides the whole ceremony as the unconscionable and immoral celebration of the “genocide” of the Egyptian people (never mind that God does not — and does not intend to — erase the entirety of the Egyptian people).  What troubles him so much is the fact that, after each plague, when Pharaoh seems about to soften and let the Jews go, God hardens Pharaoh’s heart, leading to the necessity of yet another plague, culminating in the death of the first-born.  To a Jew looking to find fault with the Bible, God is a psycho killer who toys with Pharaoh the way a cat does with a mouse.

Some people have tried to explain away this part of the story by saying that it is simply dramatic license, meant to increase the tension and danger of the Jews’ escape from Egypt.  After all, if it had been easy, it wouldn’t have been much of a story.  Imagine if the story has Moses asking, “Hey, Pharaoh, can we go?” and Pharaoh answering “Sure.”  That’s not a narrative with much punch or heroism, and God’s involvement is minimal or, at least, lacking in divine punch.  It’s much more exciting to have an escalating series of plagues, with the audience on tenterhooks as to whether those pesky Jewish slaves will actually be able to make a break for it.

Pretending that the story of the Exodus is nothing more than a dramatic narrative, subordinated to artistic demands, is silly.  There’s a much more profound purpose behind the ten plagues, and that is to remind us of the tyrant’s capacity for tolerating others’ suffering, as long he personally does not suffer and his power remains intact.

What Pharaoh discovered with the first nine plagues is that life can go on, at least for the ruler, despite an increase in the burdens placed upon his people.  A blood filled Nile River may, at first, have seemed appalling, but the red receded and life went on.  Pharaoh still held together his government.  The same held true for each subsequent plague, whether lice or boils or wild animals or frogs, or whatever:  As long as Pharaoh could maintain his power base, he was okay with the horrible suffering and incremental decimation visited upon those he ruled.

Sheltered in his lavish palace, Pharaoh might worry about the risk to his power base from a populace starving and frightened, but that was irrelevant as long as that same populace continued to fear and worship him.  The people’s suffering, ultimately, was irrelevant to his goals.  It was only when the price became too high — when Pharaoh’s power base was destroyed because his citizens were destroyed and death stalked his own palace — that Pharaoh was convinced, even temporarily, to alter his evil ways.

Human nature hasn’t changed much in 3,000 years.  Think, for example, of both the Nazis and the Japanese at the end of WWII.  For the Nazis, it was apparent by December 1944 (the Battle of the Bulge) that the war was over.  Hitler, however, was a megalomaniac in the pharaonic mold, and his high command, either from fear or insanity, would not gainsay him.  Rather than surrendering, Hitler and other Nazi leaders, secure in their protected homes and bunkers, were perfectly willing to see German overrun and its citizens killed.  Only when the death toll became too high, and it was apparent that nothing could be salvaged from the ashes, did the war on the continent finally end.

The same held true for the Japanese.  Truman did not decide to drop the bomb just for the hell of it.  Even the possibility that it would impress the Soviets was an insufficient reason for doing so; Truman was, after all, a moral man.  What swayed Truman was the fact that his advisers told him (credibly as it turned out) that the Japanese Bushido culture would not allow Japan to surrender even when surrender had become the only reasonable option.  Instead, the military warned Truman that, although the Americans would inevitably win the war, if Truman didn’t take drastic action, victory would take another year, and cost up to 100,000 American lives and at least that many Japanese lives (including Japanese civilians).

Truman therefore had two choices:  another year of war, with the loss of perhaps a million Allied lives (from troops to POWs) up to three to four million Japanese lives (from troops to civilians); or an immediate stop to the war, with no more American casualties and at comparably tolerable 100,000 Japanese casualties.  Put that way, the choice was a no-brainer.  The outcome would be bgetter for everyone.  (Incidentally, two of those Allied civilian lives saved were my mother’s and my aunt’s, both of whom were on the verge of starving to death in a Japanese concentration camp in the Dutch East Indies.)  The Japanese high command was Pharaoh.  No amount of smaller plagues could stop the command from its chosen path.  Only a large plague would swiftly lead to the inevitable conclusion.

But what about the innocent lives lost as a result of Pharaoh’s, the Nazi’s, and the Japanese high command’s intransigence?  As the Japanese tale shows only too well, the innocents were always going to die, with the only question being whether they would die quickly or slowly.  The same holds true for the Germans, whom the Nazis had long ago designated as cannon fodder to support their intensely evil regime.  That’s the problem with an evil regime.  If you’re unlucky enough to live under that regime, whether or not you support it, you’re going to be cannon fodder.  Pharaoh will let you die of plagues, and the Nazi and Japanese leadership will let you be bombed and burned — as long as they can retain their power.

Today’s tyrannies are not different.  Although the people bleed and cry under their brutish regimes, no plague has yet come along that is bad enough to break the back of today’s tyrants.  The people continue to die by inches, and the regimes threaten everyone within bombing distance — and, as is the case with ISIS and related Islamist tyrants, they travel across continents to find new people to terrorize.

Beginning with 9/11, and returning with a vengeance in 2013, with the Boston Marathon bombing, we have been forced to recognize that a modern tyranny’s reach can even enter American borders.  For  more than 200 years, we felt comfortably insulated from tyranny because of our Bill of Rights, which should protect us from homegrown tyrants, and because of our military might, which should protect us from enemies overseas.

But what happens when we have a leader who refuses to recognize the Constitution or to guard our borders?  A leader who complains that the Bill of Rights limits him and that secure borders are a racist example of white privilege?  A leader who ignores Supreme Court opinions curtailing his power grabs?  A leader who refuses to execute those laws that Congress passes, but instead drafts and executes his own laws?  A leader who spies on his people, while amassing a growing number of secrets around himself and his cronies?  A leader who relentlessly uses Leftist shibboleths to undermine our constitutional military?  A leader who single-handedly, without  help even from his own political party, hurls America into an alliance with an apocalyptic, tyrannical theocracy that is dedicated to annihilating the world’s only Jewish nature and driving America to her knees?  A leader who has a compliant media that takes upon itself the job of destroying his enemies and promoting his aggregation of power?

What happens then?  The answer is that you cease to have a constitutional system predicated upon individual liberty arising from natural rights.  And slowly at first, but with increasing speed, like a snowball gathering mass as it rolls downhill, you suddenly find that you’re the one laboring on the pyramids under the overseers’ lash, while Pharaoh Barack (or Bernie or Hillary or even, dare I say it, Donald) and his cronies, having insulated themselves from the wrath of the people, take your sweat and your blood as their natural due.  And believe me, a few red-running rivers or locust-clogged fields are not going to stop the new American pharaohs, even on that unlucky day when Islamist hordes flow through America’s already open borders.

But it needn’t be all doom and gloom.  Denial is powerlessness.  Recognizing danger and reacting to it is strength.  Don’t be cowed.  Know your principles, state them with clarity if need be, and never give up hope because, without hope, we are nothing but base animals, lacking the divine spark that makes us human.

With that, I’d like to wish all of you a Happy Passover.  Whether Jewish or not, I hope that the Pesach celebration serves as an occasion for all of us to remember that, though the price may sometimes be painfully high, our ultimate goal as just and moral human beings must be freedom. So please join with me in saying, as all Jews do at this time of year, “Next Year in Jerusalem.”