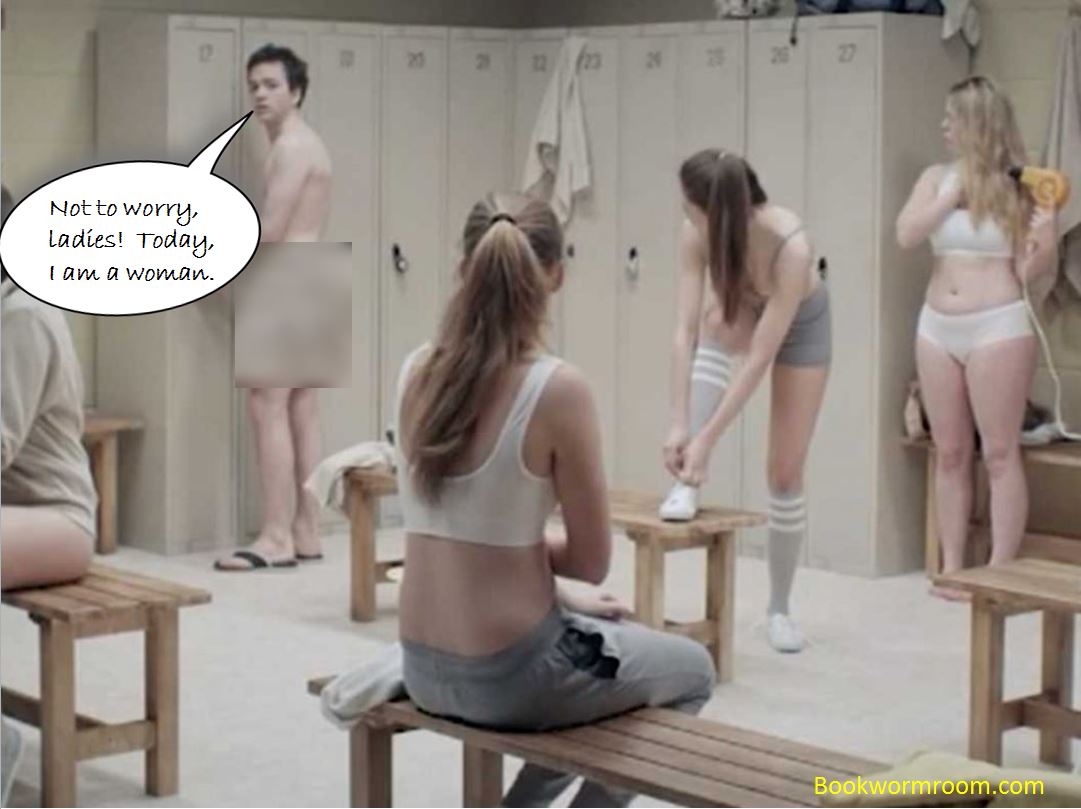 If I had artistic ability, I could recreate for you a cute Jewish cartoon from the 1960s that riffed on the hackneyed statement attributed to all generic, beardless 13-year-old Jewish boys who, having struggled through their bar mitzvahs, turn to the congregation and, in their squeaky, prepubescent voices, announce, “Today, I am a man!”  In that long-ago cartoon, the perspective takes us behind a bar mitzvah boy who has ripped open his coat, in the classic flasher position, and announced to the shocked congregation “Today, I am a man!”

Girls have their “transition” moment too, although I haven’t come across a cartoon portraying that agonizingly embarrassing moment in every teen girl’s life when she has her first period and her tearful mother says to her, “Oh, my baby is a woman!”  Or worse, she announces to the family at large, “Today, our daughter is a woman!”

What occurred to me today is that, thanks to Obama’s Title IX edict, those two concepts (“Today, I am a man” and “Today, I am a woman”) have finally merged:

Okay, that was a very bad pun, really, really bad. But just like the poor of whom Christ spoke, there always has been and always will be a small percentage of people in any society who do not conform (or do not want to conform) to traditional gender norms. These norms, incidentally, because we might have come to a time in a society when they need to be spelled out, are that boys will be boys, girls will be girls, and at a certain point the boys and the girls get together and make babies.

But here’s my historic truism: The cultures that thrive are the ones that centralize traditional gender norms, and marginalize deviations from those norms. Healthy cultures (as in “not ISIS,) can refrain from persecuting people whose sexuality exists on the margins, but they keep their cultural focus on heterosexual family units. Unhealthy or dying cultures, whether Rome at the end of its days, the Weimar Republic at the end of its days, or the utterly corrupt Ottoman court on its long, sick slide, are the ones that deliberately celebrate deviancy and marginalize the heterosexual family model.

As a civilized, decent society, we should neither persecute nor prosecute people who don’t fall into the classic male/female roles. This is especially true in schools, when children, regardless of how politely one tries to raise them, turn into ravening “Lord of the Flies” creatures who can be brutally cruel to anyone who appears different. We should never countenance that type of thing.

However, as a healthy society, we’d better stop trying to place those same non-normative gender identities and behaviors at the center of our culture. It is, invariably, a one-way street to cultural downfall. (And, much as I hate to give credit to Trump, I think that’s where he’s going: Get the feds out of it, let the states deal with it, and stop making an issue of it. That is, marginalize deviations from the norm while ignoring it as long as it doesn’t impinge on our own health and safety.