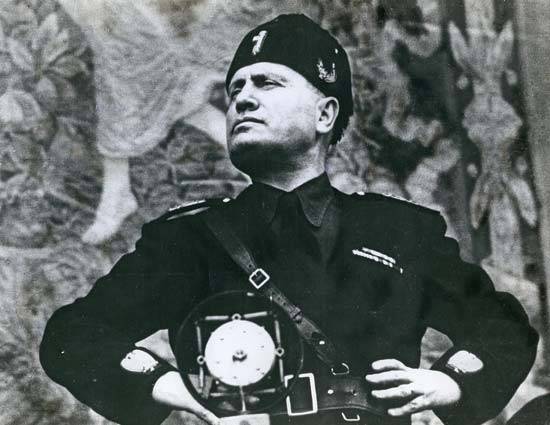 Following this fascist credo, Hitler did not nationalize German business. Instead, the Nazis allowed private ownership, with private profits, provided that the government called the shots.

Indeed, the simplest definition of fascism is contained in that last sentence I wrote. Fascism is a system that ostensibly allows individual liberty and private property, provided that it’s always the government that calls the shots.

Under fascism, shareholders can own that insurance company, but the government will mandate what policies it must issue and the prices it may charge. Citizens have the choice not to buy government mandated insurance, but they’ll be subject to an onerous financial penalty if they don’t. Likewise, Americans are welcome to have a gun, except that they must go through expensive, time-consuming, and arbitrary government hurdles to buy the gun, buy the ammunition, carry the gun, and use the gun. Parents are allowed to raise their children any way they like, except that all institutions, from schools, to hospitals, to libraries, to playgrounds, the government gets to decide what the child learns, what it is allowed to do, and how it will be treated.

This extended discussion has a point, and the point is to quote from Kurt Schlichter superb article explaining why, no matter how bad Trump is, Hillary is worse — and Hillary’s worse because she is a true fascist, rather than the media’s strawman idea of a fascist:

Some say that Donald Trump is an “authoritarian.” But Trump cares nothing about what I do personally. Hillary, on the other hand, cares deeply about what I do personally because she’s a totalitarian. She wants to control what I think, feel, and do, and even what bathroom I want to do it in. Trump may have shrugged his shoulders at the idea of transgender potties, but that’s not the kind of idea that he would ever come up with. He doesn’t care. However, it’s exactly the kind of obnoxious, intrusive idea libfascists like Hillary come up with. Trump just wants to sit around being rich and famous. Hillary wants to improve people like me and forcibly morph us into her neutered vision of the new socialist beta male she’s been dreaming of since she was an embittered last call five at Wellesley.

Trump may be kind of thuggish, but he’ll leave me alone. Hillary’s going to come looking for me, and she’s foolish and clueless enough to push and push until we normals get tired of it and start to push back. I, for one, prefer my country not to be sucked into a second civil war because some former president’s angry wife is playing out a freakish psychodrama revenge fantasy against all the guys who have rejected her, from her father to Bill to those of us male-identifying men who laugh at her cankles. Advantage Trump.

Moreover, as Schlichter explains (and I’ve noted too), while a Hillary will function unchecked (because a Democrat Congress will let her do anything and, as we saw during the Obama years, so will a Republican one), everyone will be watching Trump like a hawk. The slimy Sen. McConnell, who did nothing to assert Congress’s constitutional authority during the Obama administration, has suddenly rediscovered the Constitution’s checks and balances now that Trump has edged towards the White House.

The reality is that, no matter how bad Trump is, he cannot be as bad as Hillary because, unlike her, he has no interest in controlling every aspect of American lives. Moreover, if he gets the bit in his teeth, Congress will suddenly discover the backbone it lost in 2008.

It’s also worth noting that, having destroyed the Republican field, Trump is indeed courting conservatives. I’m too lazy to look up links, but he’s promoted the idea of strict constructionists on the Supreme Court, he’s opposed to the insanity of global warming, he’s promised not to harm Israel, he’s outspoken in supporting gun rights, and (hurrah!) he’s taking it home to the media.

And yes, Trump’s vulgar, but he can’t lower the tone at the White House much more than a president who used potty humor; talked about “kicking asses”; brought criminals and those who support murdering police into the White House; handed nuclear weapons to Iran; tried to jettison Israel, leaving her to the mercy of her genocidal neighbors; went on repeat world apology tours; denigrated police; destroyed race relations; and on and on and on. Hillary will be as bad or worse, given her extraordinary corruption. Amongst that crew, Trump starts looking like a prince.