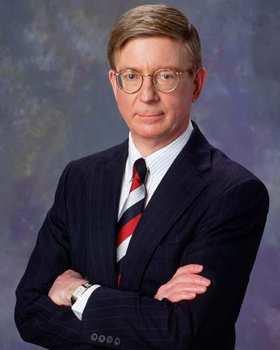 I am very grateful to George Will for clarifying something for me. As you’ve no doubt heard, after a lifetime as a Republican, he’s leaving the GOP because it appears that the GOP will yield to the voter’s will and accept Donald Trump as the Republican party candidate for president in 2016. George Will now says something similar to what Ronald Reagan once said of the Democrat party:

Will said he changed his voter registration this month from Republican to “unaffiliated” in the state of Maryland.

“This is not my party,” Will said during his speech at the event.

I can respect that. Since I left behind my Democrat past, I’ve always considered myself more of a conservative than a Republican. To me, the Republican party has always been the “go along to get along” party. It’s the party that does whatever the Democrat party does, except cries more loudly about the cost.

What I can’t respect is Will’s willingness to hand the White House over to Hillary:

Will, who writes for the Washington Post, acknowledged it is a “little too late” for the Republican Party to find a replacement for Trump but had a message for Republican voters.

“Make sure he loses. Grit their teeth for four years and win the White House,” Will said during an interview after his speech at a Federalist Society luncheon.

In other words, “elect Hillary.” It seems to me that Will is putting party before country. That is, his focus is on the unfolding horror of the decline of the Republican party. My focus is on the country. I truly do not believe we can survive a Hillary presidency and still be America.

Keep in mind that Hillary’s will not be a brand new presidency, one in which she starts from scratch, changing the previous administration’s status quo. Instead, she will be Obama’s third term (and that’s separate from worrying about whether, thanks to the blackmail potential from the dirt in her hacked emails, she’ll also be Russia’s and China’s first term in the White House). Think of what Obama has already done, all of which Hillary will continue to do:

That’s off the top of my head. You can add to the list.

To date, Obama has been way too effective in implementing the fundamental transformation he promised. Hillary will complete this transformation. The likelihood is that Trump will not.  He may have goofy ideas, but he also has asserted good values tied in to core constitutional issues or national security:

If you like Trump, I’m sure you can name other values he espouses.

So, rude, crude, and bombastic though he may be, Trump is still the antithesis of the relentlessly hard-Left, anti-American politics that Obama elevated and Hillary will continue. Moreover, assuming a Congress filled with RINOs, Democrats, and a few genuine conservatives, Trump will head off the more extreme RINO plus Democrat initiatives, while everyone in Congress will head off whatever extreme issues Trump puts forward. Moreover, no one in Congress will be okay with Trump’s executive overreach, something the GOP allowed with Obama lest it be called “racist,” and that it will allow with Hillary lest it be called “sexist.”

Once you look at the facts on the ground, rather than wrapping yourself in red, white, and blue GOP bunting, it’s obvious that, while Hillary will almost certainly continue to destroy America, Trump will probably get almost nothing done. He’ll be a placeholder for a genuinely conservative candidate in four years. (And yes, to me, that candidate is Ted Cruz.)

As I see it, political parties come and go, but that I want my America — the constitutional version of this great nation — to be around forever. That’s my idea of true patriotism. Patriotism isn’t about shouting “USA! USA!”  It’s not about purifying the country’s racial pool. It’s not about living in a perfect past that never actually existed and cannot be replicated. It’s not about invading other countries to have “lebensraum.” It’s about respecting our core constitutional institutions and doing what needs to be done to preserve them.

Going into this election, I know with certainty that Hillary will continue and complete the work Obama has done to destroy America’s constitutional institutions, while Trump, both because of decent core values and the certainty of an aggressively defensive Congress, might help America and almost certainly won’t destroy it.

So, George — be a real patriot and do what you need to do for the good of your country, rather than elevating your party over your country.