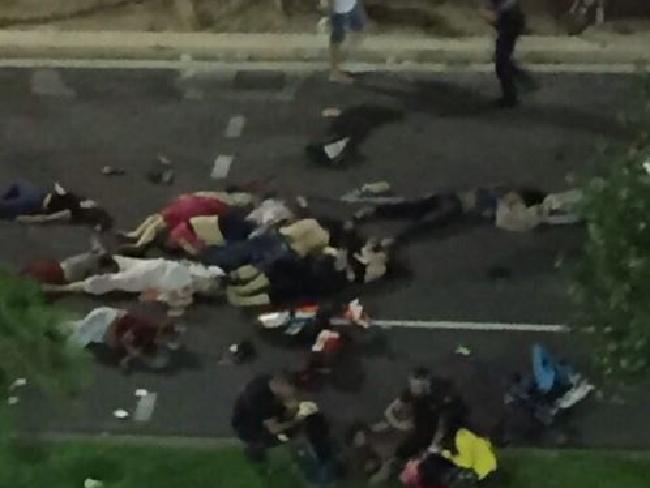 The post caption is my rendering of a quotation common amongst the British during WWI, to the effect that “The Hun is either at your throat or at your feet.” As the British saw it, if you showed weakness, the Germ-hun would go for the jugular; if you showed strength, the Germ-hun would grovel at your feet. It was the best way that a relatively free society could describe an aggressive, rigidly hierarchical society. The same can be said of ISIS and of Islamists in general as was once said of the Germans.

Today’s Muslim “Allahu Akbar” murder spree in Nice is what reminded me of this trait, one that Islamists and the pre-1945 Germans had in common. (Obviously, there are good and peaceful Muslims, just as there were good and peaceful Germans. I am talking about the troublemakers who establish the dominant paradigm.) France’s vulnerability comes about because it has for a long time been a relatively friendly place for Muslims.

It’s true that, as long as the Muslims are overtly religiously, they cannot crack the French civil service or upper economic echelons, but that’s not their goal anyway. Their goal, which the French willingly granted them, was to be left alone, to be given welfare (free housing, food, and medical care), to have dominant French society retreat from the Muslim banlieues, to have Islam’s sadistic antisemitism applauded and worked into both the national culture and Middle Eastern policy, to take over whole streets for prayer, and generally to be left alone, like a virulent bacteria in a host body with a minimally functioning immune system.

Even after the Bataclan attack, all that France did was drop a couple of bombs in Syria. The hundreds of thousands of human time bombs in France that ought to have been put at a serious disadvantage were, instead, left alone.  (Same goes, of course, for Belgium.)

Meanwhile, in America, while Clinton did bubkis after the deadly terrorist attacks on his watch, Bush, when his turn came, took us to war. We made it clear that we would bring the war to their homes and their families, and that we would kill them wherever they stood. And you know what happened during Bush’s war? Scattered Allahu Akbar attacks, but nothing too significant. Much as they postured, the Islamists knew America had them by the throat. Thus, between 9/11 and Obama’s First Inauguration, there were 16 separate Allahu Akbar attacks on American soil (as opposed to honor killings or other internecine Muslim murders), with a total of only 21 fatalities. (The number 16 is actually bit a bit misleading, because several of those attacks were individual sniper hits launched by John Allen Muhammad and Lee Boyd Malvo.)

Then Obama came along and opted for the French approach. He’s the Islamists’ biggest fan and apologist. Rather than demanding that they grovel at our feet, he went out of his way to grovel at theirs. And what did we end up with on Obama’s watch? We ended up with an escalating number of violent Allahu Akbar attacks on American soil — a clear pattern of greater frequency and greater virulence:

The only way to stop violent, hierarchical people from acting out is to stomp on them and then, starting when they’re very, very young, to train them in the ways of peace. France, tragically, sent itself up for Charlie Hebdo, and Bataclan, and Nice, because France has spent decades pandering to monsters. France isn’t alone, of course. In Sweden and Germany, the monsters are prostituting the Swedish and German women, with the result that 1,500 German women were assaulted in a single night, while Swedish girls are being raped wherever there’s a crowd  . . . or where there isn’t. In France and Belgium, the Islamists eschew rape and go for wholesale slaughter. As anyone familiar with the story of the frog and scorpion knows, deadly creatures kill (or rape) because it’s their nature. You either stay away from, destroy them, or change their nature at a very fundamental level.

As anyone familiar with the story of the frog and scorpion knows, deadly creatures kill (or rape) because it’s their nature. You either stay away from, destroy them, or change their nature at a very fundamental level.

Having said all that, my prayers are with the dead, and my thoughts are with the loved ones they left behind. As for the Islamists, I hope everyone of them rots for a painful, torturous eternity in a Muslim-designed Hell.

Oh, and one more thing: I’m getting vomitously sick of all my Lefty friends and their endless “I stand with….” Facebook posts or their teary-eyed “Give peace a chance” warblings. I’m not sad, I’m angry. Sad is a weak, passive, self-defeating, ultimately suicidal response to evil. We need to get right royally pissed off and kill the bastards. As for the ones who don’t fall in battle against our warriors, if they’re still incapable of playing nice, we need our boots resting firmly, in a powerful, yet peaceable way, on their throats, or we’ll find their knives buried deep in our necks.