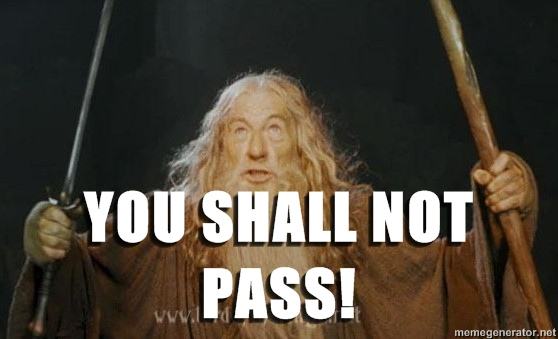 The good news — Ms. BWR should be back to her normal posting by tomorrow.  The bad news — I still have one post left to put up today before resuming my seat.  Thus without further adieu . . .

The progressive movement is totalitarian.  It took a huge hit in November right on the eve of permanent victory.  Obama, by his unconstitutional Executive actions and his weaponization of the regulatory bureaucracies — and supported between John Roberts and the activist progressive wing of the Supreme Court — had taken this nation past the brink of a Constitutional crisis.  All that remained was for Hillary to push it to the point of no return.  And going forward, if Trump fails, the progs well know that they will still have that opportunity.

As an originalist law professor opined today, “I can’t help but wonder whether the many millions who voted for President-elect Trump also understood what the legal academy had all but forgotten, that what was at stake in the past election was nothing less than the rule of law and self-government itself.”  He’s dead on point.

Had Hildabeast been elected, all of Obama’s acts would have been validated.  Progressives would have attained dominance in America that would outlast our lifetimes, given the changes they would have de facto made to our laws and what little remains of our Constitutional system of checks and balances.  Congress would have been an afterthought, with progressives ruling through the bureaucracy, by Executive Orders and through the Courts.  Ever more taxpayer money would have been funneled to cronies, laundered through Democrat organizations such as public sector unions and Planned Parenthood, and sent to the EU for “global warming,” the biggest socialist gambit / theft ever conceived.  The Supreme Court, once in solid control of the progressive left for decades to come, would have reliably rendered political decisions to advance progressive goals.  Conservatives and the religious would have been fully pushed out of the public square, their voices effectively silenced.  So to say that we dodged a bullet a little over a week ago is the mother of all understatements.

I think that I can safely say that is how we on the right see it.  But for the totalitarian left, to have final victory ripped from their hands, well . . . It is one thing to experience shock and awe.  Lord knows, most people who read Ms. BWR’s blog probably experienced that in November of 2012, with the reelection of Obama.  It is another entirely to refuse to accept the results of an election and to illegitimately resist democratic changes, and I think we are about to see that, as many progressives and socialists here and abroad have indeed throw down the gauntlet.  There will be unprecedented resistance to and outright subversion of President Trump in every corner of progressive society, from bureaucrats to the media and academia, from progressive governors and mayors to foreign leaders.

In Europe, Former President Nickolas Sarkozy has recommended that France, and perhaps the entire EU, levy a 35% carbon tax on all U.S. imports if the U.S. withdraws from the unconstitutional commitments Obama made as part of the Paris Agreement.  In Germany, the former Communist Party apparatchik Angela Merkel, a person who may well go down in history as the lynchpin of the downfall of Europe, said in a joint press conference with Obama that she will cooperate with Trump only so long as he followed “a common platform of democracy, freedom, advocacy for human rights all over the world and championing the open and liberal world order.”

Elsewhere, China has said that if they are held to what amounts to fair trade practices, they will engage in a trade war.  The nation which also looks to be the one of the major beneficiaries of our tax dollars and technology from the Paris Agreement has warned Trump not to pull out of that agreement.  In Mexico, former President Vincente Fox has declared Trump’s presidency illegitimate and threatened to defend the interests of Mexicans “outside” of Mexico.

Here in America, many expect, and at least one Wapo Editorial has called for, bureaucrats — many being unlawfully hired progs now permanently cocooned in our regulatory agencies — to resist Republican initiatives and sabotage any plans of the President.  Tom Steyer, the billionaire investor who is trying to buy the soul of the Democrat Party (though on that he is in competition with George Soros, a man who is a real life Dr. Evil), wants to see lame duck Obama make permanent changes by Executive Order in order to make large areas unavailable for drilling.  At NASA, a man at the center of the biggest science fraud of all time — the massive changes to our historic temperature records as the foundation to establish global warming — Gavin Schmidt, “has warned President-elect Donald Trump not to interfere with their climate activities.”

Many on the prog left, fed only on a steady diet of toxic racist and sexist fantasies have gone violent, and a portion of them homicidal.  The explosion of assassination threats on Twitter and elsewhere is likewise reflected in the thoughts expressed by celebrities and public figures such as Katy Perry, Josh Whedon and  others who have called for what certainly sounds like armed resistance.

Violence prior to the election was coordinated by people with ties very high in the Democrat Party.  Violent riots since the election are being organized and led by various left wing groups, many seemingly with ties to George Soros.  They want a heckler’s veto on the election — and if they succeed, our future will be no different than if Hildabeast won the last election.  Thus it is not surprising that  Obama, in arguably the most disgusting act of his presidency, is instead of trying to calm the situation, egging on the protests.  New York’s Mayor De Blasio is doing the same.

The mainstream media, which went all in for Hildabeast and openly eschewed objective reporting to do so, hasn’t missed a beat. (Update:  See NY Post essay by Kyle Smith)  They are continuing to attack Trump without the slightest hint of objectivity.  Just the other day, Senator Ben Sasse put a series of questions to the Washington Post about the ongoing protests.  Specifically, he asked “Who pays for it? How much? Why? Through what orgs? Who are the “workers”? and Who recruits?”  To this, Matthew Yglesias tweeted out that Sasse, merely by asking these questions was laying the groundwork for “an authoritarian crackdown.”  Within ninety minutes — an amazingly fast time for his thorough investigation —  Wapo’s Phillip Bump, a former labor activist now pretending to be a reporter, had posted an article responding to Sasse, painting him as a crazed conspiracy theorist.  “Sasse’s question is a bit like asking why we don’t have more reporting on the fact that the Moon is preparing a superweapon with which to annex Antarctica.”

There are over three hundred states, cities and counties that are openly defying the federal government as regards immigration law.  Several prog mayors have come out since the election to reiterate that they would continue this defiance and, in essence, dared Trump to do anything about it.  California, one of only six states with total Democrat control of government, the legislators are talking about “political war” against Trump and any changes he might try to enshrine.

My point is this.  The progressive left has no intention of taking a single step backwards irrespective of this election.  The resistance that President Trump will face going forward will be unprecedented.

Normally, I would evaluate a President’s success on a series of items, but I can’t apply those to Trump at this point, as I am not his “typical” voter.  It seems that the two dominant reasons people pulled the lever for Trump were economics and the Supreme Court.  So regardless of progressive subversion, Trump can “succeed” simply by improving the economy and making sound appointments to the Supreme Court.

Improving the economy is probably within the realm of possibility just by repealing Obamacare, a law which not only portends to break the piggy banks of countless Americans, but has also had a horrendous impact on entrepreneurship in this country. This is probably the easiest task Trump faces, given that this law was rammed through the Senate by reconciliation, thus bypassing filibuster.  I am sure that the left will argue that any change will have to go through normal process, but anything passed by reconciliation can be replaced by it as well.

Equally as important, though, Trump needs to improve the economy of the Rust Belt voters who put him in office, and that is going to be substantially more difficult.  Their jobs are long gone and, between global trade and automation, he is fighting a tide that may be immune to his Canute like efforts.  I dearly hope that I am wrong, but I can’t begin to conceive how he accomplishes this, nor the forms by which the progs will try to ensure that he fails.

As to the Supreme Court, appointing fully committed originalists to the Court is the single most important thing that Trump must do.  If he does this, there is still a chance that our Constitutional system might, in the long run, outlive the progressive assault now at its apex.

As to the deeper reforms that need to be made to this country, I do not expect those from Trump.  And indeed, the progressive left would block them at every turn.  But if he succeeds in the two areas above, he will have laid the groundwork that will make it much easier to rollback all of the progressive excreta now ensconced in our government systems.  My own list includes:

I.  Regulatory Reform — Congress needs to return to itself sole authority to legislate, just as the Constitution provides.

If you disagree or would add others, please, by all means, list them in any comments.