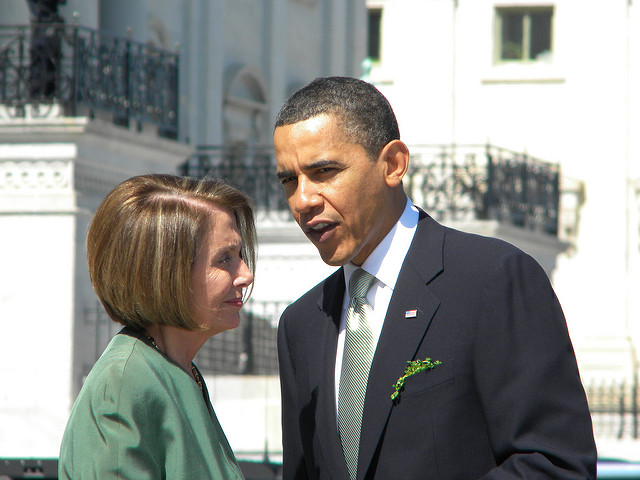 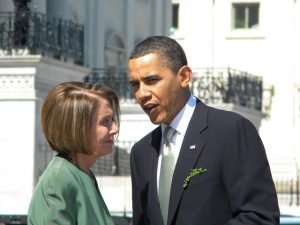 There is a new petition on Change.org asking Obama to become House Speaker in 2018. Not only is it almost charming in its lack of awareness, it is also a reminder that the Left never gives in or gives up. When the personal and the political are the same, when even brushing your teeth is a political act, you’re going to be committed to political activity 24/7.

The petition opens by reminding potential signers that they’re now living with the horror of total Republican control. Worse, Leftist activity, including “protests and lawsuits are not going to be enough to stop Trump, Paul Ryan, Mitch McConnell, Sam Alito, and company from rolling back decades of progress virtually overnight, particularly if rank-and-file Republicans feel no pressure to dissent from Trump’s party line.”  That reference to “decades of progress” is a funny one, because as best as I can tell, Trump is determined to roll back only 8 years of “progress,” which doesn’t even equal a single decade.

What you’re seeing here is something I’ve written about frequently, which is the Lefts’ belief that the 1950s are always lurking just around the corner with Jim Crow (a purely Democrat initiative), back alley abortions, gays deeply closeted and, perhaps worst of all, men and women playing their assigned gender roles. The fact that Trump was considered a benefactor to the black community before he ran as a Republican or that his initiatives towards gays and sex roles seem to be limited to blocking the federal government from telling schools to ignore biological gender or forcing nuns to buy birth control seems to have eluded J. Q. Adams, the petition’s author.

Panicked at the thought of all these inchoate horrors, Adams asks, “What can be done?”

Well, Adams has a “long-shot” idea. We know it’s a long-shot not only because he says so, but because, after accusing the GOP of gerrymandering Democrats out of federal existence, he admits that it may not have a lot of momentum after what he calls, with magnificent understatement, “the Democrats’ recent difficulties in midterm elections.”  Those “recent difficulties” see Republicans with the greatest hold over America at both the state and federal level in more than ninety years.

Adams is a man of faith, however. He believes that, Democrats can block Trump’s momentum, if they can just pick up “24 seats to win the House and 3 to win the Senate.”  To do this, after failing in 2010, 2012, 2014, and 2016, all that Democrats need to do is create “a powerful national message” letting Republicans know that they’re on the hook for everything from “Trump’s bigotry and misogyny, to his trampling of cherished freedoms and democratic norms, to his dangerous foreign policy, and to his plans to privatize Medicare, cut taxes for the rich, take away 20 million Americans’ health insurance, abolish workers’ right to organize and women’s right to choose, and allow climate change to continue unabated.”

With that kind of agenda, Adams concludes that there’s only one man for the job:  Barack Obama!

Adams points out, accurately enough, that Obama still has an incredibly high approval rating. What he seems to miss is that the approval rating is for Obama, the person, not Obama, the policies. Obama’s policies have gone down to defeat in every single election since 2010. That’s why Obama was reduced to making ephemeral changes with pen and phone, changes that Trump can reverse with equal ease. In countries and states across America, while voters have kept a residual affection for Obama, they’re hostile to what he’s down.

What this means is that, when voters think about Adams’ outrage at Republicans’ “trampling of cherished freedoms and democratic norms,” they’re not thinking of Trump, who hasn’t even been inaugurated. Instead, they’re thinking of Obama’s attacks on religious freedom (“You nuns had better buy birth control or else”), his attacks on Second Amendment rights (“I believe in the Second Amendment as long as none of you have guns”), his really undemocratic lies (“If you like your doctor, you can keep your doctor”), and his undemocratic norms on biological reality (“Ignore the DNA and genitalia! People are whatever they want to be, whenever they want to be, and to heck with your bigoted concerns about your children’s well-being”).

When voters think about “dangerous foreign policy,” they’re not worried about Trump turning his back on a policy Jimmy Carter put into place that saw him cozying up to a totalitarian state at the expense of an ally. Instead, they’re thinking about red lines in Syria, about deaths in Benghazi, about ISIS blooming like algae over the Middle East, about Putin in power in that same Middle East, about Iran spinning centrifuges with American money, about open invitations to former residents of failed terrorist states, and about the true democratic efforts breaking out all over the EU.

When voters think about “plans to privatize Medicare,” what springs into their minds are thoughts about huge premium increases, due in part to policies that Obama forces them to buy with coverage they don’t want; bank-breaking deductibles; and vanishing doctors and hospitals. Trump’s proposals to keep only the good stuff (kids on policies and insurance for preexisting conditions) fills them with joy, not fear.

When voters think about tax cuts “for the rich,” they’re probably not panicking, because they’re beginning to realize what I’ve said for a long time: Governments do not create wealth by taking taxes. Taking taxes for anything more than basic government functions is simply redistribution with healthy doses of cronyism, corruption, and inefficiency thrown in. The potential for wealth-creation exists in a country’s people, not its government. It’s people, with their drive, their creativity, their innovation, their desires, their needs, and their discipline that create wealth. The more money the government sucks up, the less the people are able to create that wealth. When Trump returns money to the people — all the people — a lot more people will have the opportunity to bypass the crony capitalism that has been the only path to wealth in Obama’s America.

When voters  think about government abolishing “workers’ rights to organize,” they’re probably thanking their lucky stars that the government labor unions may be on the way out. People are beginning to realize that, in the free market, when labor and management negotiate, they both have skin in the game: it’s their money at stake, whether in terms of salaries or dividends. When government negotiates with labor unions, however, the only people with skin in the game are the taxpayers and they are not at the negotiating table. Instead, the politicians give the unions salaries far in excess of the free market (all courtesy of the taxpayers) and the unions show their gratitude by funneling this same taxpayer money right back to the politicians. It’s a sick, heartless game and it needs to stop.

When voters think about doing away with “women’s right to choose,” they recognize a con when they see one. They sent Republicans to Congress and, eventually, to the White House because they do not believe that they should have to pay for women’s birth control, nor is it right for the government to coerce people who do not believe in abortion or birth control (both of which are core moral concerns, whether or not one agrees with them) to pay for insurance that provides for abortion or birth control. They’ve also begun to realize that, while most Americans will recognize circumstances in which abortion is okay, the Democrat party has become a party of death that refuses to recognize any circumstances in which abortion is not okay,  including the circumstance that the baby has already been born alive.

And finally, when voters think about “allowing climate change to continue unabated,” they recognize the biggest con of all. One by one, those Americans who haven’t drunk to deep of the Kool-Aid understand that the climate has changed for billions of years, that the Progressives’ hysterical predictions never come true, that whenever a prediction fails they explain that the failure is itself proof of their theory, and that vast amounts of American wealth are being redistributed inside the country to crony capitalism and outside of the country entirely to Americans’ detriment. Oh, one more thing:  If our American media did its job, Americans would very quickly understand that the core premise underlying climate change hysteria, which is the multiplier added to increases in CO2, is wrong:

After over 35 years of speculation, 25 years of IPCC reports, multiple US government reports, and US government estimates that it spent over $40 Billion on climate science since 1993, and it spent over $150 Billion on activities to “fight global warming”; it is past time to produce physical evidence that the amplified atmospheric warming from increased water vapor exists. If the evidence is not produced, the hypothesis that human emissions of CO2 will cause dangerous global warming is as obsolete as peak oil theory, or that the sun is immutable, unchanging.

Again, the voters may like Obama personally, but their choices when it comes to Congress and the White House put the lie to the claim that they like Obama’s policies too. (Well, except for voters in California, New York, and Massachusetts, which is why we need to be so incredibly grateful for the buffer that is the Electoral College.)

Poor deluded Adams, though, is certain that voters will come around.  “Once Trump is saddled with Paul Ryan’s dystopian legislative agenda, Obama’s relative public standing will be even greater.”

And so it is that Adams asks Obama to make the sacrifice of stepping back into the political realm (a realm Obama has already promised he won’t be leaving) to run for the House out of Chicago. Adams can see it already:

If you agree, please respectfully ask Bobby Rush to step aside for his old rival and friend.  Ask Nancy Pelosi to invite the President to lead her caucus.  And ask Barack Obama to start planning a massive rally in Chicago — maybe February 10, 2017, ten years to the day after that audacious speech in Springfield — where he can announce that in 2018 he will be running for office just one more time, asking the South Side to send him to Congress, and asking all Americans to put an end to the Trump disaster by electing the 44th President of the United States to a two-year term as the 63rd Speaker of the House of Representatives.

Adams seems to have missed that Obama’s tenure has not been good for Chicago’s South Side. They’re dying like flies there.

Indeed, some of them have been figuring out that they’re being used. Perhaps these residents trapped in the Democrat hell of Chicago’s South Side might convince Obama that he’s not going to feel the love in quite the way Adams hopes:

So, by all means, my dear Progressive friends, sign the petition. If nothing else, it will be interesting to see how Obama fares after two years of Trump’s policies unchaining the free market and getting the federal government out of people’s private lives and pocketbooks.