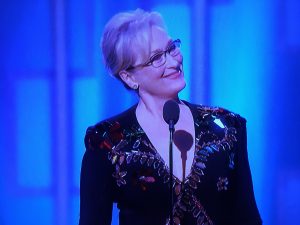 The Golden Globes were held last night.  Meryl Streep used her time on stage at the ceremony to launch into a political lecture, attacking Trump and condemning the evil, unwashed masses who voted for him.  Not surprisingly, the Democrats and the MSM (but I repeat myself) are wetting themselves in glee.  You can find the text of her speech here.

She begins her speech with a crie de coeur, playing the victim card.  “You, and all of us in this room right now, belong to the most vilified segment of American society.”

You have got to be kidding.

There is no more of a privileged class than those actors and actresses in attendance at this year’s Golden Globe awards ceremony.  They are paid between 6 and 8 figures to read lines written by someone else while playing make believe.  Streep seems to believe this imbues her with superior morals and knowledge such that she is justified in lecturing the rest of us poor shlubs — all of whom make some fraction of what she does for exponentially more time and effort — as to what we should think and how we should act.  My response to that is not printable in this blog.

Just how Streep and all other Hollywood actors and actresses are being vilified, Streep does not say, but she does make mention of “losing her mind” in recent weeks.  It would appear that she perceives that those who cast a vote for Trump were likewise casting a vote against her personally.  How much of a grandiose narcissist does a person have to be to see a Presidential election as a referendum on themselves?

Next Streep makes a statement so devoid of intelligence it is cringeworthy.  After going down a laundry list of the actors and actresses present at the ceremony who were born outside of America, she states:  “So Hollywood is crawling with outsiders and foreigners, and if we kick them all out, you’ll have nothing to watch but football and mixed martial arts, which are not the arts.”  Oh, talk about your idiotic histrionics.

Streep’s intimation is that Trump and the evil Republicans are about to decimate Hollywood and this country by booting out everyone of foreign birth.  I hope that this horse’s ass is just trying to make a cheap point and does not actually believe what she said.  That is a claim so outlandish you won’t even find it in the fever swamps of Daily Kos.  It is as if she does not understand the difference between legal and illegal immigration, nor the cost the latter imposes on ordinary Americans, and particularly Americans in the lowest socio-economic classes.  Obviously Ms. Streep moves in more rarefied circles.  Perhaps she should ask her gardener about it.

Streep next resurrects the claim that Donald Trump “bullied” a disabled NYT reporter to the delight of Trump voters:

[T]here was one performance this year that stunned me. It sank its hook in my heart not because it was good. It was — there was nothing good about it, but it was effective, and it did its job. It made its intended audience laugh and show their teeth. It was that moment when the person asking to sit in the most respected seat in our country imitated a disabled reporter, someone he outranked in privilege, power, and the capacity to fight back. It kind of broke my heart, and I saw it, and I still can’t get it out of my head because it wasn’t in a movie. It was real life. And this instinct to humiliate when it’s modeled by someone in the public platform by someone powerful, it filters down into everybody’s life because it kind of gives permission for other people to do the same thing.

Trump immediately and vehemently denied even knowing the reporter, let alone attempting to mock the reporter’s disability.  And indeed, the story has been thoroughly debunked.  Further, the reporter works for the NYT.  Contrary to Streep’s claim, he hardly lacked the platform or capacity to fight back.  And indeed, the NYT and the rest of the MSM went hard after Trump for this claimed act of mockery.  Lastly, Streep explicitly states that Trump’s audience understood the mockery and embraced it.  What a horse’s ass this woman is, to claim to be able to discern the motives and malice of all who supported Trump and were present at the event.  But such are all progs, who see only evil in those who disagree with them politically.

And for her substantive grand finale, Streep says:

This brings me to the press. We need the principal press to hold power to account to call them on the carpet for every outrage.

That’s why our founders enshrined the press and its freedom in our Constitution. So I only ask the famously well-heeled Hollywood Foreign Press and all of us in our community to join me in supporting the Committee to Protect Journalists because we are going to need them going forward and they’ll need us to safeguard the truth.

So the press is being silenced and their noble mission is to safeguard the truth?  Who knew?  Or more accurately,  how the hell can this idiot say that with a straight face after what we’ve just been through?

Virtually the entire MSM press corps is an arm of the progressive party.  Wikileaks exposed the fact that several of our most important journalists were openly collaborating with the DNC.  Nor has that been a career killer.  In each case, the journalists who did that are either still employed in their position (John Harwood at CNBC, Mark Leibovich at the NYT) or have been recently hired by the NYT (Glenn Thrush) to now cover Trump.  This is beyond shameless.  And as to the performance of the press over the past year, they openly eschewed objective reporting — i.e., the truth — in an effort to destroy Trump, all as well documented previously by Ms. BWR.  These partisan scum wouldn’t recognize the truth if it bit them on the ass.

Streep finishes her lecture with an incredibly insipid platitude.  “As my friend, the dear departed Princess Leia said to me once, ‘Take your broken heart. Make it into art.’”  I think Shakespeare’s place in the pantheon of thought and word is still secure.

What an ignorant and supremely arrogant woman is Mrs. Streep.  I wish her the best of luck in her bubble and hope she keeps up with the lectures and condemnations between now and 2020.  I can assure her, she will have an impact on many more Americans and of far more consequence than any of her acting gigs ever did.