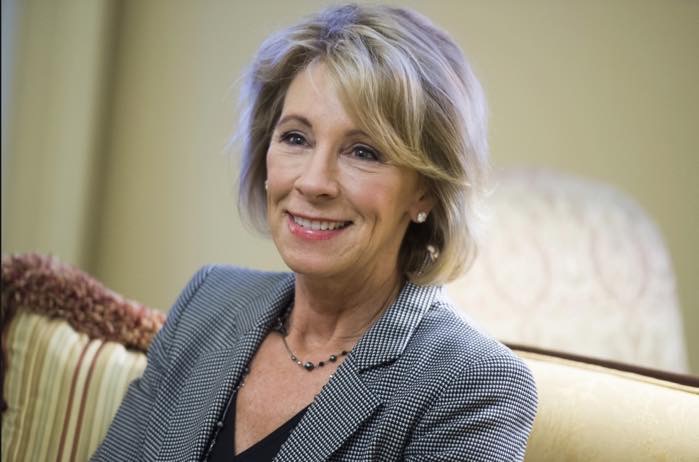 I exhausted my self with last night’s lengthy Bookworm Beat, but I have two points — one about Betsy DeVos’s qualifications to be Education Secretary and the other about Oakland’s fund for illegal immigrants — that I believe go a long way to summing up so much of what’s wrong with Progressives.

First, I want to raise a thought that occurred to me in connection with a very specific attack against Betsy DeVos (whose position as Education Secretary may fall before two Republicans who have taken massive sums of money from teacher’s unions — unions that happen to be the most powerful unions in many blue states and that are nothing more than money laundering entities for the Democrat party). Here’s the offending poster: 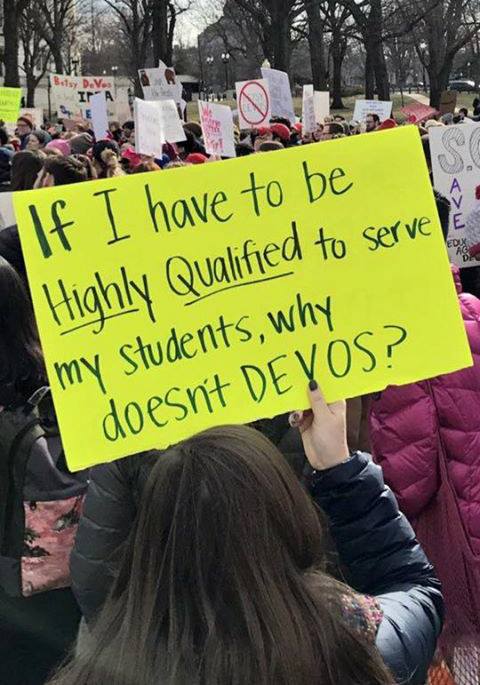 The message, of course, is that DeVos cannot possibly serve as Education Secretary, making policy decisions about American public education, because she never got a teaching degree.

Before I get to the DeVos portion of this discussion, I want to address the sign-carrier’s unspoken contention that she is smart and knowledgeable, thanks to her teaching degree. I wouldn’t assume that at all.

I know and have known people who are truly gifted teachers, even if being a teacher is a financial sacrifice. That was certainly the case for my father, one of the most erudite people I’ve ever had the pleasure of Wit knowing. One of my good friends is so drawn to teaching that she’s abandoning a good career to get a teaching degree. I know that she will make a difference.

Having made that bow to the passionate and gifted teachers among us, I have to point to a sad reality: Too many American teachers, especially in elementary and middle schools, aren’t top-notch scholars (no matter how carefully a WaPo fact checker tries to challenge that point).

Although it’s terribly politically incorrect to say so, the high point of American education was before Second Wave feminism. Back in the days when women were explicitly or more subtly barred from profitable professions such as doctor, lawyer, architect, biochemist, physicist, etc., the bright women went into teaching. While this may have blighted their lives and careers, the upside was that it meant that American children were often on the receiving end of genuinely knowledgeable people with inquiring minds. (I must say, though, that very few of those bright minds found their way into my public school classes in 1960s and 1970s San Francisco. I did, however, hear rumors that they existed.)

Nowadays, most bright women go for the big bucks, high-profile jobs, leaving teaching degrees to a small cohort of passionate educators and a larger cohort of sweet women who like children but who don’t have a lot of intellectual firepower. Although this latter group can be taught techniques for teaching, and can find their way around a textbook (especially the teacher’s edition), that doesn’t mean they actually know anything.

I had innumerable run-ins with this second type of teacher throughout my children’s years in public school. The story that best illustrates my unending fight against the teacher’s failure to think and lack of curiosity happened when one of my kids, a 4th grader, took a multiple choice vocabulary test that asked her to fill in the missing word in this sentence: “The girl turned on the _________ lamp.” Two of the choices were “fluorescent” and “florescent.” My child, being fairly bright, correctly tagged “fluorescent” as the correct word — and got marked down a point because the teacher believed the correct word was “florescent.”

Because I pick my battles, I didn’t take this teaching fail up the chain of command, especially because I knew from past experience that the principal, another dim bulb, would side with the teacher. Incidentally, this all took place at a “California Distinguished School.” So, as a preliminary matter, I’m probably not going to be impressed by the poster gal’s claimed teaching degree and vaunted abilities unless she can prove to me that she has intelligence and knowledge to back it her alleged “qualifications.”

But there’s a deeper problem with the above poster than getting into an argument about who’s smarter or more knowledgeable — the teacher or DeVos. The problem is that the poster assumes that only someone who has been indoctrinated in a modern education program is equipped to guide the federal government’s policies for educating America’s children.

You’ll notice that I used the word “indoctrinated” rather than “educated” to discuss what takes place in any American college that hands out teaching degrees. The fact is that, for decades now, the always useful “Three Rs” have been given a backseat to social justice and to just about every educational fad that comes along.

Here’s the deal: If you want to know how to teach children, study Maria Montessori who, more than 100 years ago, spent time actually observing how children learn, and then set about creating a curriculum that feeds into their energy, curiosity, and need to understand why something is important enough for them to learn, before they can be force-fed the how of actually learning it.

If you don’t want to teach children, turn to a social justice rubric of the type that has seen the collapse of the Minneapolis school district. There, in its bow to social justice, the school district has made it virtually impossible to discipline black students because the powers that be determined that the only reason black students were on the receiving end of more school discipline was racism. Kathy Kersten detailed the anarchy that followed — tragically, there was a complete breakdown that exposed teachers and students to physical risk and that ensured that nobody got an education . . . although apparently social justice was served.

I have a friend who worked for many years as a social worker in a large urban public school district. A local education college required its students, as part of their education degree, to spend a semester doing an internship with my friend. At the end of the semester, the school submitted a questionnaire to my friend, asking her to rate her intern. She showed me the questionnaire. It did not ask a single question about the intern’s work ethic, ability to work with students and families, understanding and knowledge of techniques for dealing with issues, etc. It simply wanted assurance that the intern was au courant on all things social justice: white privilege, black lives mattering, Hispanic identity, etc.

My jaded take on public education — the training behind it and the practice that is it — means that I’m pretty damn sure that the less DeVos knows about the skills required to graduate from a modern education mill, the better. But let me take the whole thing one step deeper.

Have you ever watched the show Undercover Boss? I’m not a fan of reality shows (except, of course, for Dancing With The Stars), but Mr. Bookworm likes it, so I’ve seen a few episodes. The premise is that an executive (a desk jockey, a numbers person, a personal director, a CEO, a founder, etc.) of some vast, growing American company dons a wacky disguise and goes to work amongst the lowliest of his employees. For example, the general manager for a fast food chain might find himself at the cash register or behind the grill. Invariably, the boss is impressed by how hard the work is at this low level, bungles the work quite a lot, meets a bad employee, and meets several good, helpful employees whom he rewards at the end of the show with cash, scholarships, cars, etc.

While I agree that it’s extremely useful for a good manager to know his business from top to bottom, and have a working sense of what each job requires, I think it’s ridiculous for anyone to assume that someone who has a good understanding of systems or money is less of a leader because he’s all thumbs when it comes to frying fries or moving tires around at an auto shop. Whether DeVos can teaching a 5th grader preliminary algebra skills is kind of irrelevant. What we want her for is a broader understanding those systems that best serve students (e.g., charter schools, school choice, Montessori schools) and those systems that utterly fail American children (e.g., public schools that have placed tenure and social justice over educating children).

You don’t need to work in a classroom or have attended a single day of teacher’s college to understand the principles in this PragerU video:

DeVos is being appointed to a position that involves larger principles, and how to effectuate them, not classroom minutiae, which is other people’s responsibility (and, in too many cities, those responsible for that minutiae are doing a lousy job). While a leader’s abilities undoubtedly benefit if he’s familiar with the individual trees in the forest for which he’s responsible, he cannot manage the forest unless he has a grasp of what it looks like — and whether it needs a substantial overhaul in order to be a functioning ecosystem. (See what I did there? I used the word “ecosystem,” which is very popular term in modern “climate change” oriented education, as I have reason to know, thanks to my kids.)

The short version of my long story? That teacher’s placard is entirely irrelevant. It tells us nothing about whether DeVos’s decades of work in education reform have left her with a greater understanding of how to remedy broken school districts than the understanding about those same systems that a fourth grade teacher with a social justice degree and bad spelling skills possesses.

Here’s the second thought about Progressives:

My friend John Novick (who courageously said I could use his name) he jotted a quick email to me about his experience in Oakland (Berkeley’s next-door neighbor). He thinks his experience tells a lot about why Trump won and I think he’s correct:

♦ Had dinner in trendy downtown Oakland last night, about 2 blocks from the Paramount Theatre

♦ Called the police, waited on hold for 10 minutes, listening to the message in English, Spanish, and Mandarin

♦ Operator got on, spent 12 seconds explaining to me that I have to file the police report online. Period. No interaction with an officer.

♦ Bankrupt Oakland, which cannot help me, has produced a $300,000 legal defense fund for illegal immigrants to fight deportation.

I know I’m old-fashioned, but I think the priority should be a tax paying citizen who is spending money in a downtown that is coming back and needs to come back (jobs, tax revenue, etc).

I can afford the couple of grand I lost, but I found the experience, the changing principles disheartening.

I think Americans want America back.

John’s story proves (again) that the American Left has determined that ordinary Americans — not just “white privileged” Americans, but all ordinary Americans, such as those who go out to dinner in Oakland in the evening — are of less importance than illegal aliens, a broad variety of criminals, people allergic to work, and people who have elected to live highly non-traditional lifestyles.

Ordinary Americans don’t agree. They resent the fact that, in their headlong rush to marginalize the hard workers and rule followers, no matter their race, gender, sexual orientation, country of national origin, or religion, Progressives ignored the majority of people in the 2,626 counties that voted for Trump. To these Progressives, America is defined by the 487 counties that gave themselves over to Hillary, with everyone else being (say it with me) racist, bigoted, homophobic, Islamophobic, sexist, and therefore unworthy of a say in American government or the right to take pride in American norms.