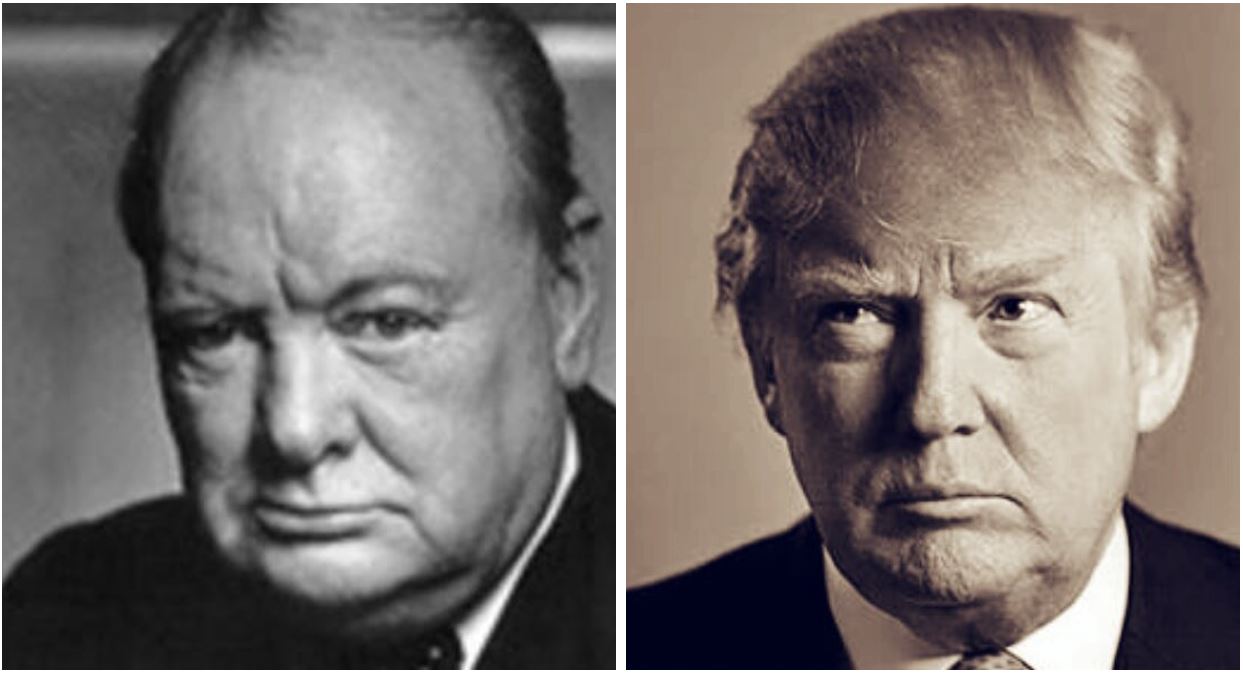 I’m having a little bit of fun here, but it’s really amazing how many similarities you can find between Donald Trump and Winston Churchill.

Before people start screaming in anguish at the possibility that Donald Trump might be America’s Winston Churchill, this post is meant to be somewhat tongue-in-cheek. Still, there are a few commonalities between the two, not the least of which is that both emerged when their countries were facing existential extinction, in both hot and cold wars. If you like, you can play along with me in the comments:

Parentage — not identical, but with a nice symmetry:

Winston Churchill was the British-born son of an American mother.

Donald Trump is the American-born son of a British mother.

Winston Churchill was born into a wealthy family.

Donald Trump was born into a wealthy family.

Winston Churchill was a member of the Liberal Party before becoming a conservative.

Donald Trump was a member of the Democrat Party before becoming a conservative (or, at least, pretty darn conservative).

Hated by the elite liberal establishment:

When Winston Churchill left the Liberal party and started speaking out in favor of preparing for war, he became a pariah. He was therefore very low during the 1930s, so low that, at a dinner party, after staring moodily at his plate, he suddenly announced to his surprised dinner companion, “We are all worms. But I believe that I am a glow-worm.”

When Donald Trump was a Democrat, he was feted at the White House and by America’s black political elite. When he came out as a conservative, the entire Progressive establishment set out to (and is still trying to) destroy him.

Winston Churchill, although a toff, drew his political strength from ordinary Brits. During WWII, they trusted him and knew that he had their backs.

Donald Trump, although one of the wealthiest people in America, is still the kid from Queens. He understands how ordinary people feel as they watch Progressive elites, wedded to their globalist belief system, trample over constitutional rights, destroy middle- and working-class people economically, populate America’s cities and towns (far from the elite’s own pristine, gated communities) with illegal aliens and sharia-practicing refugees, and continuously stir up racial hatred that plays out in ordinary people’s neighborhoods not in elite enclaves. Trump may be an egotist, but he’s got something all those self-congratulatory Progressives lack: empathy and compassion.

Understands and speaks out about the problems with Islam

Winston Churchill had the following to say about Islam and its practitioners — and do note that he is speaking in ideological, not racial terms, which means that he believes that reform was possible and could save people from Islam’s stifling and dangerous effects:

“How dreadful are the curses which Mohammedanism lays on its votaries! Besides the fanatical frenzy, which is as dangerous in a man as hydrophobia in a dog, there is this fearful fatalistic apathy. The effects are apparent in many countries. Improvident habits, slovenly systems of agriculture, sluggish methods of commerce, and insecurity of property exist wherever the followers of the Prophet rule or live. A degraded sensualism deprives this life of its grace and refinement; the next of its dignity and sanctity. The fact that in Mohammedan law every woman must belong to some man as his absolute property – either as a child, a wife, or a concubine – must delay the final extinction of slavery until the faith of Islam has ceased to be a great power among men. Individual Moslems may show splendid qualities. Thousands become the brave and loyal soldiers of the Queen; all know how to die; but the influence of the religion paralyses the social development of those who follow it. No stronger retrograde force exists in the world. Far from being moribund, Mohammedanism is a militant and proselytizing faith. It has already spread throughout Central Africa, raising fearless warriors at every step; and were it not that Christianity is sheltered in the strong arms of science – the science against which it had vainly struggled – the civilization of modern Europe might fall, as fell the civilization of ancient Rome.”

Donald Trump, looking at the Islamic wars waged against the U.S. since 1979, and with increasing frenzy and furor since 2001, has also commented on the religion’s deleterious effects, while holding out hope that those who leave Islamic fundamentalism and, and should be, part of the brotherhood of man:

“This is a problem that Islam has. I called upon Muslim leaders to call out and denounce these murders, these terrorists. Decrying violence isn’t enough.”

“Until we are able to determine and understand this problem and the dangerous threat it poses, our country cannot be the victims of horrendous attacks by people that believe only in Jihad, and have no sense of reason or respect for human life.”

“You can be politically correct if you want, but are you trying to say we don’t have a problem? Most Muslims, like most everything, I mean, these are fabulous people. But we certainly do have a problem, I mean, you have a problem throughout the world. It wasn’t people from Sweden that blew up the World Trade Center.”

Winston Churchill had raw political courage. There’s no other way to put it.

Donald Trump has raw political courage. There’s no other way to put it.

Has a way with words

Winston Churchill was a magnificent orator and writer. His prose was crisp and elegant. Importantly, given his connection with the common people, he stayed close to short, powerful, Anglo-Saxon words. His famous “We shall fight them on the beaches” statement had only seven words that weren’t from Old English, one of which was the word “surrender” — from the French. You can’t beat oratory like this:

“The gratitude of every home in our Island, in our Empire, and indeed throughout the world, except in the abodes of the guilty, goes out to the British airmen who, undaunted by odds, unwearied in their constant challenge and mortal danger, are turning the tide of the World War by their prowess and by their devotion. Never in the field of human conflict was so much owed by so many to so few.”

“An appeaser is one who feeds a crocodile, hoping it will eat him last.”

Donald Trump lacks Winston Churchill’s elegance and eloquence, but he’s got a way with words . . . a way that destroys his political opponents and slams home his ideas:

“Lying” Ted Cruz (although I am so delighted to see that Cruz did what was right for America and now supports the Trump administration. It speaks incredibly well of him that he put his personal feelings aside for the good of the nation).

“Little” Marco Rubio (who still needs to work on getting over his anti-Trump pique).

As I said, not eloquent or elegant, but these descriptors target people where it hurts and leave indelible memories in voters’ minds.

Also, I’ve come to believe that Trump’s slightly muddled speech or apparently silly exaggerations fall into the “crazy like a fox” category. Had Trump simply said that Sweden was having troubles with Muslim immigrants, the media would have ignored that statement entirely. However, because Trump sounded muddled, the media jumped all over the fact that “last night” there was not a “terrorist” attack (not the Trump ever used the phrase “terrorist attack”) in Sweden.

Of course, what came out was what conservatives have long known, which is that Sweden’s huge and growing Muslim population is not assimilating well. While many of Sweden’s elite neighborhoods are untouched, which makes globalists smug, the reality is that in the borders were the immigrants touch the Swedes (in and around Malmo and other towns), the immigrants are playing by their own rules: violent sexual assaults on kafir women, brutal antisemitism, riots, etc. It was truly Trumpian that an immigrant (i.e., Muslim) riot broke out in Sweden right after the press decided to highlight how peaceful Sweden is.

Likewise, his (possible) overstatement about illegal aliens voting in the presidential election forced the media to confront the issue. Much as Progressives in the media wanted to say the statement was a “lie,” they couldn’t. At best, all they could say was that it was an exaggeration. But what Americans learned is that illegal aliens are voting in California elections very high numbers in some places. (One has to wonder how different American politics would be if (a) illegals weren’t voting in California and (b) illegals weren’t counted in the census, improperly swelling California’s numbers in both the House of Representatives and the Electoral College.)

One more example is the fact that Trump was able to produce information showing that, of the seven countries named in his original executive order staying immigration, 72 people from those countries were convicted for terrorist acts.  Vice News, in a nightly broadcast I cannot find on the internet, rushed into say that this wasn’t really true, it was only partly true. What was the real truth? Other Muslim minority countries produced citizens who were responsible for even more acts of terror than those from the seven countries in the executive order. In other words, Vice News managed to prove only that the executive order didn’t go far enough.

This is my lunch break, and I’m working off the top of my head here, so I’ve come to the end of my little game comparing Churchill to Trump. Do you have any more ideas or would you like to shoot this whole notion down? I’d love to hear from you.

Incidentally, to the extent that I think Trump’s appointments so far have been great to brilliant, does anyone know anything about the quality of the people Churchill appointed to help him carry England through WWII?