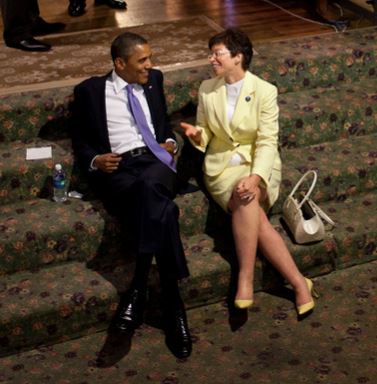 Contrary to the weight of American history, Barack Obama has set himself up as a government in exile. It’s time to expose him to the American people.

Ace nails it, describing Obama’s changes to national security policy so as to destroy Trump as being akin to Voldemort seeding the world with his horcruxes so he couldn’t die. And no, Obama is not just taking advantage of fortuitously leaked data that the Deep State is coincidentally leaking. Obama set this one up:

Note that the media continues to claim that Trump is “just making stuff up” when he says Obama loyalists are responsible for these leaks of information — and will continue doing so, even after it’s revealed that Obama put the information into the hands of loyalists hidden deep in the Deep State.

By the way, remember this story from a few weeks back? (Don’t comment on old posts.)

Obama, on his way out the door, radically changed NSA rules to allow them to share unredacted surveillance information while preserving the names of people (US citizens) it’s illegal for the US to spy on without a warrant. This is a change of practice– the NSA used to have to scrub out the names of US personnel it’s not permitted to eavesdrop on.

Here’s a question for you: Looking back at the tapestry of American political history, has any outgoing president ever set himself up as the leader of an opposition — a government in exile, if you will — that is being fed illegally created and leaked immigration by Fifth Columnist administrative flunkies and that is using the media as its mouthpiece, with a stated goal of driving his duly and democratically elected successor out of office? It may not have happened before, but it’s happening now:

Barack Obama is turning his new home in the posh Kalorama section of the nation’s capital – just two miles away from the White House – into the nerve center of the mounting insurgency against his successor, President Donald J. Trump.

Obama’s goal, according to a close family friend, is to oust Trump from the presidency either by forcing his resignation or through his impeachment.

And Obama is being aided in his political crusade by his longtime consigliere, Valerie Jarrett, who has moved into the 8,200-square-foot, $5.3-million Kaloroma mansion with the former president and Michelle Obama, long time best friends.

It is time to destroy Obama. He’s not president anymore. He is now, I think, a self-declared enemy of the State and there should be nothing stopping us. And when I say “destroy,” no, I am not threatening his life. Perish the thought. Given that my concern is Obama’s destruction of our peaceful, democratic American political system, I could never, ever countenance using violence to bring about political change. I am simply talking about destroying Obama’s reputation.

It is time to get hold of those college transcripts that Obama has hidden so carefully, the ones that probably show him pretending to be a winsome African student so as to get admitted despite grades that I’m quite certain are mediocre at best.

It is time to explain what kind of a marriage Obama and Michelle have that sees Valerie Jarrett move into their new home with them.

It is time to find out just what kind of ties Obama had with violently-inclined pro-Palestinian activists — and what’s on that tape from a pro-Palestinian luncheon that the Los Angeles Times protects so fiercely.

It is time to hunt down Obama’s ex-girlfriends (none of whom seem to exist, except for the made-up girlfriend he shared in fiction land with Bill Ayers) or, perhaps, his ex-boyfriends (a few of whom I wouldn’t be surprised to find exist).

It is time to investigate how Obama managed to afford going to expensive colleges and law schools, given that his hidden transcripts, his manifest ignorance, and his appalling writing when Ayers isn’t ghost-writing for him all suggest that he didn’t earn scholarships based upon his academic acumen.

It is time to understand why this allegedly cool, hip, brilliant man emerged like a newborn Phoenix from the Chicago political scene, with no past — no friends, no significant others, no family, no nothing . . . except of course for Valerie Jarrett, Bill Ayers, and Reverend Wright.

If you’re saying that it would be much more satisfying to take Obama down by pointing to data manipulation that occurred in the government on his watch in order to fake a climate change emergency, showing the deals and side deals that went into the Iran agreement, or releasing the information showing the lies and carelessness about Benghazi . . . I agree. The problem is (a) that these things aren’t sexy to people who are more interested in Oprah and Real Housewives than in politics and, even more significantly, (b) that these are the kind of things that the dominant, openly Progressive media will bury as boring, in the past, and irrelevant.

The other stuff I’ve mentioned, the sordid, disgusting, weird, secretive stuff, is the kind of thing that, once revealed, cannot be hidden or contained. National Enquirer will publish it. Daily Mail will publish it. People will spread it through social media. And the mainstream media will have to address it whether it wants to or not.

The other thing we need to do is get people, ordinary Americans, really, really angry that the outgoing president of the United States of America is trying to destroy America’s 242 year constitutional history of smooth transitions of power from one government to the next without coups or bloodshed. Frankly, I’m not sure how one goes about inflaming the masses — masses who have been pacified by computer games and social media and rendered ignorant by decades of Progressive control over education — but it needs to be done. What’s happening now is outrageous and un-American, and it cannot end well.