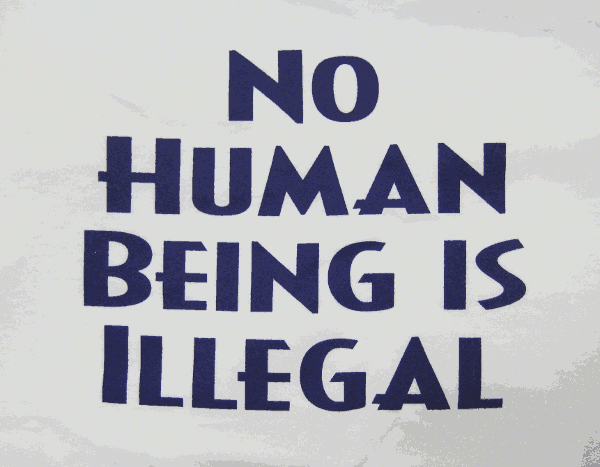 Following Donald’s DACA decision, disingenuous Progressives flood Facebook with the misleading claim that “No human being is illegal.”

With President Trump having announced that he is reversing Obama’s illegal DACA order and tossing the matter back to Congress where it properly belongs, my Facebook page is getting filled with variations on this theme:

Sometimes the phrase that “no human being is illegal” is attached to Jorge Ramos, Univision’s propaganda chief, and sometimes to Elie Wiesel, Holocaust survivor. No matter the source, the point the Progressives are making is clear: It’s immoral to dehumanize people who have invited themselves into this country without permission by calling them “illegal.” To the extent Trump supporters seek to return to their natal lands those who are in this country without permission, we are dehumanizing them and are therefore all Hitler.

This is a singularly dishonest point. Anyone with a modicum of intelligence — which excludes all Progressives and their poor, brainwashed children (the ones who usually haul these signs around at protests — understands that “illegal alien” is a shorthand way to refer to a person who, just by being in this country, is engaged in illegal activity. Thus, the phrase refers to a choice on someone’s part to engage in an illegal activity.

Our prisons are filled with people who make such choices:

Over the years, of course, we’ve developed terms of art for these criminally-inclined people that do not use the specific word “illegal” to describe them. Instead, we say, “He’s a burglar or a robber.” “She’s a DUI.” “She’s a rapist.” “He’s a murderer.” We could just as easily have called them “an illegal house breaker,” “an illegal driver,” “an illegal sex grabber,” or “an illegal life-taker.”

All of us upon hearing those “illegal”-based phrases would have understood that the term “illegal” describes the conduct in which the person engaged. It’s is not negating the person’s humanity. It is identifying the person’s behavior.

Progressives, though, have found an idea and they’re running with it. First they shifted the correct legal term, which is “illegal alien,” and turned it into “illegal immigrant,” which that last word tying into America’s self-identity as a nation of immigrants.

Having gotten Americans used to the fact that illegal aliens are just immigrants like anyone else in America’s history, except for a petty paperwork problem, Progressives then shifted again. “Illegal immigrant” became “undocumented immigrant,” which implies that poor immigrant — the person just like you or me or either of our ancestors — forgot his legal documents on his piano when he left home and made a midnight run for an unguarded portion of the American border. It could happen to anybody. You know how it goes.

Lately, the AP has taken the whole packet of Orwellian verbiage one step further:

Apparently it’s no longer necessary to reside in America by birth or by properly applying to the United States to have the honor and privilege of being an American citizen. Now, anybody can be a citizen simply by residing within our borders.

With this mindset it place, it’s no wonder an MSNBC hack, taking this Orwellian word play to its logical conclusion, posted this memorable tweet (which he later deleted):

You understand, as I do, that his parenthetical didn’t refer to the small chance that a person illegally in America nevertheless voted. He knows that many of them voted. Instead, he couldn’t conceive that people who vote illegally, because they are not citizens, would cast a vote for Trump. I suspect he’s right about that too. Jorge Ramos’s marching orders were to vote for Hillary. Thank goodness for the electoral college defeating what is likely massive voter fraud in the 2016 election. (I’ve been certain for four years that Obama’s second term was the result of voter fraud, but that’s water under the bridge.)

Elie Wiesel’s formulation had a very distinct meaning: No person, simply by virtue of existing, is illegal. Illegality must be tied to acts, not existence. To hold otherwise is indeed to deny each individual his or her humanity. Savvy Leftists know this, but deliberately ignore it; the useful idiots seem incapable of understanding this.

As it is, Leftists are perfectly comfortable with exterminating one class of person simply because it exists. I leave you to draw your own conclusions about the class to which I refer.