Without Western Civilization, we veer dangerously close to reverting to our pagan roots — roots watered with the blood of human sacrifice. 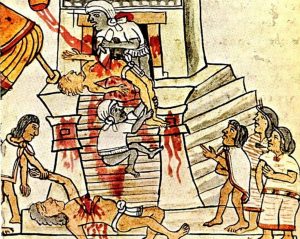 For millennia, Jews have forbidden human sacrifice. Although there are myriad more sophisticated interpretations examining the Biblical narrative about the Binding of Isaac, the most basic interpretation was that God created this dramatic scenario to impress upon Jews that he did not crave human flesh and blood. This is hardly unexpected, given that man is made in God’s image. One doesn’t deliberately despoil His creation.

When Jews took this principled, doctrinal stand against human sacrifice, they were outliers. The book of Genesis, in which the Binding of Isaac appears, probably dates back to around the latter half of the 15th century BC (that is, about 1450-1410 BC). Everywhere else in the known world human sacrifice was normative. In a world controlled completely by animistic polytheism, the notion of mere animal sacrifice, which kept from the Gods the tastiest, most important offerings, was ludicrous.

Eventually, both Greece and Rome turned against human sacrifice, but they still remained dedicated to animal sacrifices. These rituals often involved slitting an animal’s belly open and “reading” its entrails while the animal still lived.

Moreover, when it came to humans, neither Greece nor Rome was known for its humanist impulses towards life. Indeed, both Greece and Rome heartily approved of infanticide, rape, torture, and blood sports. Meanwhile, outside of these nations and their first, dainty steps towards modern Western Civilization, the Celts and the Germanic tribes continued with gusto to placate capricious gods with human blood and flesh.

The genius of Christianity was that, over the centuries, it successfully convinced pagans, from Rome to Britain to Norway, that Christ was the ultimate human sacrifice. Through the ritual of transubstantiation, worshipers would receive the eternal benefit of that voluntary sacrifice without having to destroy another human being to placate the Gods. Throughout Europe, these newly created Christians joined with Jews in their understand that man is unique in that he is created in God’s image; one doesn’t mutilate that image and throw it back in God’s face.

The fact that both the Jews and the Christians eschewed human sacrifice didn’t instantly turn them into vegans. In Biblical times, the Jews continued to wage bloody war long after the binding of Isaac and the Christians did the same long after the crucifixion. The Christians also maintained torture and blood sports. Nevertheless, this humanist seed, once planted and cultivated, burst forth in the Enlightenment with all sorts of interesting ideas:

We hold these truths to be self-evident, that all men are created equal, that they are endowed by their Creator with certain unalienable Rights, that among these are Life, Liberty and the Pursuit of Happiness.

Those words, and the ideas and practical consequences behind them, changed the world. War did not end, but it lessened. Men did not eschew violence, but societies under the umbrella of Western Civilization continued the long slow process of becoming less violent. (For more on the genetic reality that Westerners are less violent, I recommend Nicholas Wade’s A Troublesome Inheritance: Genes, Race and Human History

, an honest science book that got its author banned from the New York Times.)

These revolutionary ideas about mankind’s worth would have been incomprehensible to pre-Christian pagans. To them, man was a plaything of the gods, and the gods were the embodiment of the cruel, irrational, omnipresent natural world surrounding the pagans. These hungry, angry, capricious figures needed to be placated and human blood was their favorite food.

So you see that we’re talking about a sea change in human thinking when we look at the way a little Jewish tribe transferred to Rome, the world’s largest and most powerful nation, this peculiar reverence for humankind. Then Rome sold it this strange idea to the world which, by the late 17th century, started to understand what this reverence really means.

This was a good thing.

Modern Leftists don’t understand this. Instead, even though Leftists benefit as the rest of us do from the humanism that is Western Civilization, they tell themselves that Western virtues are observed in the breach in the West and, instead, flourish amongst those whom the West oppresses. Nowhere is this attitude stronger than when it comes to the stories Leftists spin about Native Americans.

These stories have been part of America’s academic curriculum since the 1960s. Those of us under 60 were taught that Native Americans were the acme of a humanism that tightly aligns with Leftist virtues: peaceful communal living, environmentalism, women’s rights, race and color blind — the Native Americans had it all. Meanwhile, the whites, those representatives of so-called Western Civilization, were selfish, nature-destroying, woman-hating, racist, slave masters.

Except, as I pointed out years ago, this approach to Native Americans ignores history entirely. Thanks to the Left’s recent full frontal attack on Columbus as a vehicle by which they hope to destroy Western Civilization (Indigenous People’s Day, anyone?), others are making the same point, and are better and louder than I ever could be:

When thinking of pre-Columbian America, forget what you’ve seen in the Disney movies. Think “slavery, cannibalism and mass human sacrifice.” From the Aztecs to the Iroquois, that was life among the indigenous peoples before Columbus arrived.

For all the talk from the angry and indigenous about European slavery, it turns out that pre-Columbian America was virtually one huge slave camp. According to “Slavery and Native Americans in British North America and the United States: 1600 to 1865,” by Tony Seybert, “Most Native American tribal groups practiced some form of slavery before the European introduction of African slavery into North America.”

“Enslaved warriors sometimes endured mutilation or torture that could end in death as part of a grief ritual for relatives slain in battle. Some Indians cut off one foot of their captives to keep them from running away.”

Things changed when the Europeans arrived, however: “Indians found that British settlers… eagerly purchased or captured Indians to use as forced labor. More and more, Indians began selling war captives to whites.”

That’s right: Pocahontas and her pals were slave traders. If you were an Indian lucky enough to be sold to a European slave master, that turned out to be a good thing, relatively speaking. At least you didn’t end up in a scene from “Indiana Jones And The Temple of Doom.”

Ritual human sacrifice was widespread in the Americas. The Incas, for example, practiced ritual human sacrifice to appease their gods, either executing captive warriors or “their own specially raised, perfectly formed children,” according to Kim MacQuarrie, author of “The Last Days of the Incas.”

The Aztecs, on the other hand, were more into the “volume, volume, VOLUME” approach to ritual human slaughter. At the re-consecration of the Great Pyramid of Tenochtitlan in 1487, the Aztecs performed a mass human sacrifice of an estimated 80,000 enslaved captives in four days.

Read more here for information about the Native American affection for rape, torture, and cannibalism.

Not all tribes were this blood-thirsty. Indeed, there was a name for those tribes that were more gentle and less-blood-thirsty:  food for the Gods.

If you’ve ever wondered why the Spanish, with 167 men and a few horses, were able to bring down the entire Aztec empire, it was because every surrounding tribe helped out. These less-warlike (or at least, less war-successful) tribes were through with being used as “Deity treats — the food that Gods love to eat.”  Those who survived the diseases that the Spaniards unwittingly brought with them welcomed Christianity’s promise of salvation without human sacrifice.

Well, maybe not so much.

The “Godless” Marxism of the 20th century, seen in Hitler’s fascism, and everyone else’s communism, also demanded blood to placate the Gods — except in the 20th and early 21st centuries, the Marxists actually went one worse than the pagans. Unlike the pagans, who truly believed in their otherworldly deities, the Marxists saw themselves as the gods. These Marxists gods then cheerfully sacrificed roughly 100 million people around the world and piled the bodies at the base of altars dedicated to themselves.

And then there’s Africa. Poor Africa. Despite the best efforts of missionaries, large parts of Africa remain immune the Western Civilization’s civilizing influence. For a long essay on the subject, I highly recommend this classic, from Kim du Toit.

One could, of course, dismiss what du Toit has to say about Africa as just one man’s opinion. However, contemporaneous news stories out of Africa, such as the following, not only support du Toit’s thesis, but also support my thesis, about the wonderful civilizing influence of Western Civilization, as filtered through the Judeo-Christian ethos — and about the inhuman, even anti-human societies that can result when Western Civilization is banished:

A woman in the Democratic Republic of Congo was publicly raped, whipped and decapitated in front of a cheering crowd after serving ‘forbidden fish’ to a group of anti-government rebels, who later drank her blood.

Video footage of the execution in Luebo, in the province of Kasaï-Occidental, shows the naked woman being shamed in the town’s main square by a group claiming allegiance to the Kamuina Nsapu rebel movement.

While the video was filmed on April 8, 2017, the footage recently emerged after circulating on Whatsapp.

In video of the woman’s execution, the leader of the rebel group, Kalamba Kambangoma, is seen grabbing the woman by the hair before she is taken to the stage to be publicly raped.

Rebel leaders force the woman to have sex with the son of her husband’s second wife, and another woman is seen whipping the pair with branches.

Following the public rape, rebels executed the woman and the young man, believed to be in his 20s, by beheading them with machetes.

Several rebels drank their blood after the execution, and some even posed with the young man’s severed head, witnesses told France 24.

Onlookers can be heard applauding and screaming throughout the video.

While those two people’s deaths are contrary to Luebo customs, and the Luebo townspeople stayed as far from the grotesque scene as possible, the Kamuina Nsapu rebels who held the village, and who were caught up in a frenzy of drugs and blood lust, had no such constraints. They were functioning at the pagan level, a world that supports incest (which the Judeo-Christian culture does not) and human sacrifice (again, not part of Judeo-Christian Western Civilization.

What’s the point of my post, other than to say that, when it comes to base human nature, some things never change?

Just this: I’m trying to give a reminder that those same American Progressives who claim to embody peace and harmony, in their frenzy to erase Western Civilization are opening the door to the worst aspects of lizard-brain human nature. The truth is that Western Civilization, aside from the wonders of flush toilets and cell phones, is most importantly a bulwark against the irrational, pagan blood-lust that lives within all of us.