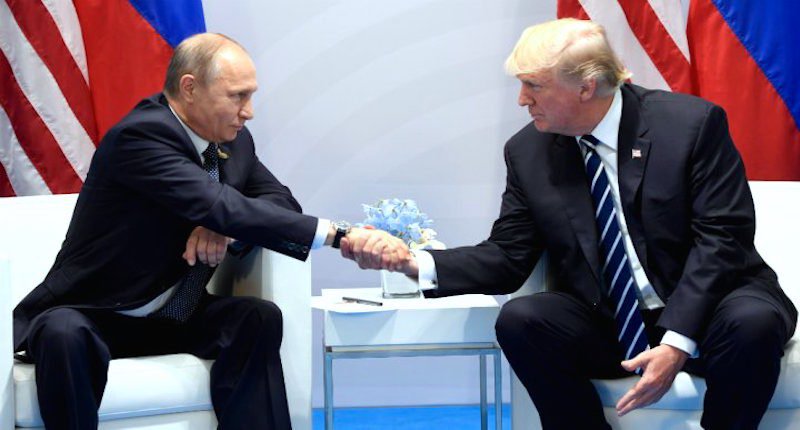 If Trump is crazy, he’s crazy like a fox. As for members of the media, they are stupid — not stupid in a smart way, but genuinely, truly stupid.

I’ve been mentally composing a post in my head today about Trump’s negotiating tactics with Putin, not to mention his other clever moves, all of which are aimed at cutting through the garbage of diplo-speak or at engaging in functional relationships with un-nice people who nevertheless share planet earth with us and with whom war would get very ugly, very quickly. So, I had all these inchoate ideas and arguments, when suddenly I had before me Dov Fischer’s masterful Everyone is Smart Except Trump.

Having read it, I feel as if all the best ideas, arguments, and jokes I had in my head, all of which were blending in an incoherent (at worst) and dull (at best) mess, got sucked out of me and incorporated into an article that had me saying after every sentence, “Gosh, I wish I’d written that.” Here are some select gems from Fischer’s article, but you’re denying yourself both a pleasure and a learning experience if you don’t read the whole thing:

The Seedier Media never have negotiated life and death, not corporate life and death, and not human life and death. They think they know how to negotiate, but they do not know how. They go to a college, are told by peers that they are smart, get some good grades, proceed to a graduate degree in journalism, and get hired as analysts. Now they are experts, ready to take on Putin and the Iranian Ayatollahs at age 30.

Trump’s voters get him because not only is he we, but we are he. We were not snowflaked-for-life by effete professors who themselves never had negotiated tough life-or-death serious deals. Instead we live in the real world, and we know how that works. Not based on social science theories, not based on “conceptual negotiating models.” But based on the people we have met over life and always will hate. That worst boss we ever had. The coworker who tried to sabotage us. We know the sons of bums whom we survived, the dastardly types who are out there, and we learned from those experiences how to deal with them. We won’t have John Kerry soothe us by having James Taylor sing “You’ve Got a Friend” carols.

NATO is our friend. They also rip off America. They have been ripping us off forever. We saved their butts — before there even was a NATO — in World War I. They messed up, and 116,456 Americans had to die to save their butts. Then they messed up again for the next two decades because West Europeans are effete and so obsessed with their class manners and their rules of savoir faire and their socialist welfare states and their early retirements that they did not have the character to stand up to Hitler in the 1930s. Peace in our time. So they messed up, and we had to save their butts again. And another 405,399 Americans died for them during World War II. And then we had to rebuild them! And we had to station our boys in Germany and all over their blood-stained continent. So, hey, we love those guys. We love NATO.

And yet they still rip us off. We pay 4% of our gigantic gross domestic product to protect them, and they will not pay a lousy 2% of their GDP towards their own defense. Is there a culture more penny-pinching-cheap-and-stingy than the fine constituents of the North Atlantic Treaty Organization? These cheap baseborn prigs will not pay their fare. They are too cheap. They expect America to send boys to die for them in one world war, then another — hundreds of thousands — and then to pay for their NATO defense even a century later.

And then they have the temerity to cheat us further in trade. Long before Trump, they set up tariffs against us for so many things. If the average American knew how badly Europe has been ripping us off for decades with their tariffs, no one in this country would buy anything European again. We would say, as a matter of self-respect and personal pride, “I no longer will buy anything but American, no matter what it costs.”

Here’s the thing: Putin is a dictator. He answers to no one. He does whatever he wants. If there arises an opponent, that guy dies. Maybe the opponent gets poked with a poisoned umbrella. Maybe he gets shot on the street. Maybe the opponent is forced to watch Susan Rice interviews telling the world that Benghazi happened because of a YouTube video seen by nine derelicts in Berkeley and that Bowe Berghdal served with honor and distinction. But, one way or another, the opponent dies.

Trump knows this about Putin. And here is what that means:

If you insult Putin in public, like by telling the newsmedia just before or after meeting with him that he is the Butcher of Crimea, and he messed with our elections, and is an overall jerk — then you will get nothing behind closed doors from Putin. Putin will decide “To heck with you, and to heck with the relationship we just forged.” Putin will get even, will take intense personal revenge, even if it is bad for Russia — even if it is bad for Putin. Because there are no institutional reins on him.

But if you go in public and tell everyone that Putin is a nice guy (y’know, just like Kim Jong Un) and that Putin intensely maintains that he did not mess with elections — not sweet little Putey Wutey (even though he obviously did) — then you next can maintain the momentum established beforehand in the private room. You can proceed to remind Putin what you told him privately: that this garbage has to stop — or else. That if he messes in Syria, we will do “X.” If he messes with our Iran boycott, we will do “Y.” We will generate so much oil from hydraulic fracturing and from ANWR and from all our sources that we will glut the market — if not tomorrow, then a year from now. We will send even more lethal offensive military weapons to Ukraine. We can restore the promised shield to Eastern Europe that Obama withdrew. And even if we cannot mess with Russian elections (because they have no elections), they do have computers — and, so help us, we will mess with their technology in a way they cannot imagine. Trump knows from his advisers what we can do. If he sweet-talks Putin in public — just Putin on the Ritz — then everything that Trump has told Putin privately can be reinforced with action, and he even can wedge concessions because, against that background, Putin knows that no one will believe that he made any concessions. Everyone is set to believe that Putin is getting whatever he wants, that Trump understands nothing. So, in that setting, Putin can make concessions and still save face.

That is why Trump talks about him that way. And that is the only possible way to do it when negotiating with a tyrant who has no checks and balances on him. If you embarrass the tyrant publicly, then the tyrant never will make concessions because he will fear that people will say he was intimidated and backed down. And that he never will do. Meanwhile, Trump has expelled 60 Russians from America, reversed Obama policy and sent lethal weapons to Ukraine, and is pressing Germany severely on its pipeline project with Russia.

Incidentally, although I can’t find it now because I wrote it on my old Blogger account, I remember arguing during the Dubya years that the press was helping him out by painting him as a crazy cowboy. That image, combined with actually invading Iraq, was what brought Qaddafi to heel. Of course, it turned out that the really blood-thirsty, crazy cowboy-ette was Hillary. Incidentally, for those still mourning the unfulfilled Hillary presidency, and claiming that Trump has no understanding how to comport himself on the international stage, please remind me how this performance comports with the world of international diplomacy:

As for me, it’s hard to think of a more disgraceful statement from a politician.