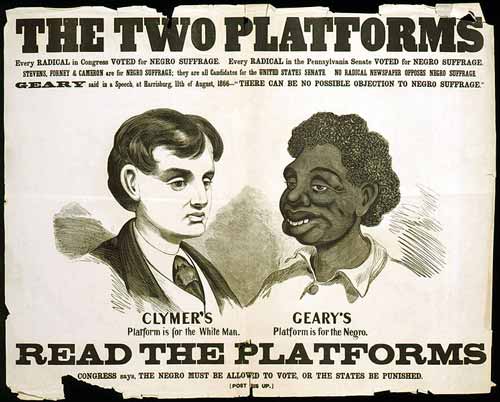 When it comes to the soft bigotry of the Progressive elite, an old post of mine reveals that everything old is new again (or just as bad as always). 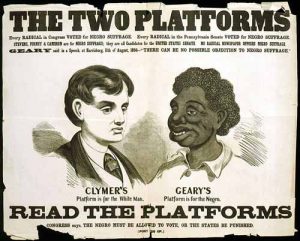 Today marked the second time in less than a week that I worked for hours on a post, decided it was garbage, and dumped it. I hate the wasted time, but it’s better to do that than to embarrass myself in front of you guys. As for other blogging, I have to admit to a sense of deja vu when it comes to my writing. Lately when issues have arisen, I’ve thought, “Well, I already blogged on that.” This post is an example of that sense of “been there, done that” that sometimes afflicts me.

I was listening to Dan Bongino today and, starting at about 25 minutes in, he referred to an excellent David French article, The Democrats Have A Rich White Progressives Problem, about the racism that drives Leftist thinking among the white elite Progressives who finance today’s Leftism:

As the white Democratic elite stampedes towards secular progressivism, it’s even moved to the left of black Democrats on key racial issues. As Thomas Edsall notes in the New York Times, white liberals are more likely to believe that racism is responsible for racial inequality than black Americans. For example, 79 percent of white liberals believe “racial discrimination is the main reason why many black people can’t get ahead these days” versus 60 percent of African Americans.

A significant 32 percent of African Americans agreed with the statement, “Blacks who can’t get ahead in this country are mostly responsible for their own condition.” Only 18 percent of white liberals shared that view.

In other words, although they couch it in nice, pretty terms, white Democrats today think exactly as white Democrats in the Jim Crow south thought — blacks and other minorities are inherently inferior based on the color of their skin.

As it turns out, I’d figured out years ago that elite white Progressives hold this view. Indeed, I blogged about it almost exactly seven years ago.

Mr. Bookworm is a very nice person but neither he nor I are the Democrats we were when we met. I’ve become a conservative; he’s become a Progressive. Moreover, the corporation in which he works is a Progressive stronghold, so he’s imbibed its attitudes. Already then that elite Progressive attitude couldn’t conceive of minorities competing on equal terms with white people.

This way of thinking showed up in a conversation we had with the kids way back in 2011. I’m going to reprint the entire post below, because I think it’s as relevant today as it was in 2011, especially in light of David French’s article and Dan Bongino’s podcast:

Minority employees and “making it” in America

Mr. Bookworm works for a very large corporation.  While we were in the car with the kids, the conversation turned to the exquisite sensitivity the corporation has to show when it’s faced with firing a minority employee. The process is arduous, requiring huge HR involvement, dozens of staff interviews and a lengthy paper trail.

The above are facts. What fascinated me was the different spin Mr. Bookworm and I put on those facts. Mr. Bookworm sent twenty minutes explaining to the children that, to the extent blacks were poorer employees, it was because their culture made them incapable of working. (This was not meant as an insult. He was talking, of course, about the culture of poverty.).

Mr. Bookworm painted a picture of a black child living in a ghetto, with a single mother who gave birth to him when she was 14, with several siblings from different fathers, with a terrible school, surrounded by illiterates, hungry all the time, etc.  No wonder, he said, that this child doesn’t bring to a corporation the same work ethic as a middle class white kid.

This creates big problems for corporations.  A modern corporation truly wants to hire minorities.  Once it’s hired them, though, according to my liberal husband, it ends up with workers who are incapable of functioning in a white-collar, corporate environment. The corporation therefore finds itself forced to fire its minority hires more frequently than white or Asian employees, with the result that it’s accused of racism. Its response to that accusation is to proceed with excessive caution and extreme due diligence whenever a black employee fails at the job.

I suggested to the children that something different than downtrodden black culture might be going on. Past generations of immigrants in America labored under the same handicap as the current generation of blacks (and, I guess, Hispanics).  Irish Catholics, Jews, Italians, Poles — no matter the label, you could spell out for them the same sorry tale Mr. Bookworm told about the hypothetical black kid, a story of poverty, parental illiteracy, poor schools, hunger, etc.

The difference, I told the kids, was that, back in the day, neither laws nor popular culture affirmatively protected these people. They were barred from the universities, banks, and law firms. Their response was to be better and work harder.  They carved out new industries (e.g., Hollywood.)  They made themselves more American than all the other Americans put together. They made their entrance into the mainstream a fait accompli.

“Okay, then. Why don’t we give blacks credit for being smart, not helpless. Since they know that, once they’re through the door, it’s virtually impossible to fire them, why should they do more work than they have to?  Just as you wouldn’t work any harder for an ‘A’ than you need to in a class you don’t particularly like, why should they work any harder for job security in a job they don’t particularly like?  That’s not helpless thinking; that’s smart-allocation-of-personal-resources thinking.”

And no, that doesn’t mean that all blacks are bad employees. There are a gazillion blacks out there who work hard because they want to, because they like to, or because it’s the right thing to do — which is precisely why whites work hard.  But there are clearly also a lot of blacks out there who neither like nor want to work hard, and they’ve figured out that a toxic combination of white guilt and fear of liability for workplace discrimination creates an out for them.  This doesn’t make blacks helpless and stupid. It makes them savvy marketplace consumers.

The above discussion revealed another interesting difference in the way Mr. Bookworm and I look at the world. When I gave my Catholics, Jews, Irish, Italian, etc., example, Mr. Bookworm said that I was describing incrementalism, which has no validity today.

What is “incrementalism”?  It’s the notion that success in America may be the work of several generations. This was the old pattern:  You, the immigrant, arrive at Ellis Island, illiterate, unable to speak English,  and a foreigner to the culture.  Unsurprisingly, you end up in a ghetto. Your children go to school.  They do not become CEOs, but they move into the working class — something that could never have happened in your own class-stratified, antisemitic or anti-Catholic or anti-Irish or anti-whatever home country. Your grandchildren then move into the lower middle class, or even the middle- or upper-middle class. In two or three, or maybe four, generations, your family has made it in America.

Mr. Bookworm’s view is that this slow, upward trajectory is wrong. In today’s world, welfare, social policies and PC hiring practices should ensure that, not only is there a chicken in every pot, but every family should have a high level white-collar worker just one generation out from poverty. I happen to believe that, while there will always be young people with drive and initiative who can make this leap, expecting it from the big part of the bell curve is ridiculous and impossible. Wrapping our educational, economic and social policies around this goal is a recipe for wasted money, ungainly government programs, personal failures, and class disappointment. In other words, it’s how we ended up with OWS [Occupy Wall Street].