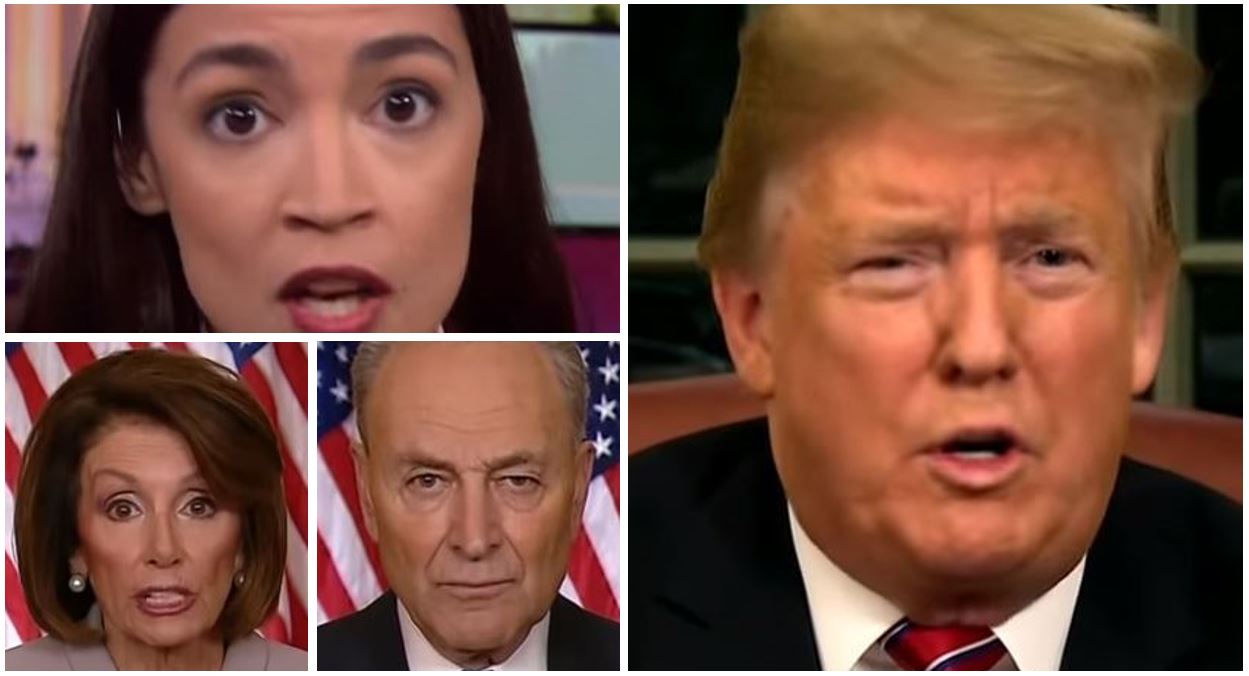 On the border wall, a surprisingly uncharismatic Trump showed he loved America and Americans, while Democrats succeeded only in showing they despise Trump. 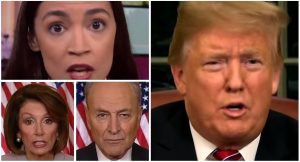 Having had some time to think about Trump’s address, as well as the official and unofficial rebuttals, I have a few thoughts, none particularly deep or meaningful. I therefore offer them for what they’re worth:

Trump spoke about the American people. He made it plain that he is working to benefit them, especially those in the front lines of dealing with the harm wrought by people who ought never to have been here in the first place.

Pelosi and Schumer spoke about Trump. Their hatred was manifest and should cause people to wonder whether their working for the good of Americans or simply to import voters, along with attendant drugs and violence.

Ocasio-Cortez spoke about garble-gooble fizwitz aliens blumpf Americans karpoffez deelywhop clum Marx shcniszzsle open borders. It continues to behoove us to take her seriously and to make sure that Americans understand that she represents the up-and-coming generation of young Democrats.

Trump did not say a single word about race. Nevertheless, he was instantly attacked for being racist. There is nothing racist about insisting that people who enter the country do so after knocking on the front door and asking for permission, rather than by leaping over the back fence, breaking through the kitchen window and, in some cases, poisoning the food, raping the women and children, and killing a family member or two. This is about behavior, not race.

CBS was so busy “fact checking” Trump that it inadvertently and absolutely proved that he understated the horrific attacks on Latin American women inveigled into making the march to the American border. CBS then did the only thing a modern mainstream media outlet could do, which was to delete its inadvertently pro-Trump, anti-illegal immigration fact-check.

Scott Adams is correct that the main problem with American politics is the media. Before the second half of the 20th century, the American media was partisan, but it was honest . . . just with a spin. It now has a vested interested in saying anything that will (a) support its hard-Left ideology and (b) destroy Trump. It has gone full Orwell. Because both political parties play to the media, they are feeding into a dishonest, polarizing mindset that makes functional government virtually impossible.

I understand that the Oscars are still casting about for a host. I suggest Pelosi and Schumer.

Trump’s performance was below par. He sounded as if he had a cold and his delivery was wooden. I haven’t decided yet if that was because (a) he was uncomfortable reading from a TelePrompTer without the energy he draws from a live audience; (b) he was trying to appear completely staid, and not like the crazed dictator Democrats accuse him of being; (c) he was trolling the Democrats in ways I haven’t yet figured out; or (d) he had a cold.

Trump’s words were relatively effective, so I was sorry his flat performance detracted from them. He spoke about the damage being done to America’s minority communities, about the damage across America from illegal drugs, and about the unnecessary deaths to American citizens. I think he could have explained more strongly why a physical barrier works, although his point about Democrats living in protected homes was a good one. He should also have pointed out that, while all that electronic surveillance the Dems demand will certainly allow us to see people crossing the border, it won’t do anything to stop them from crossing the border.

While the political class, including both professional and non-professional pundits, is set and nothing will change, I believe that the fact that Trump spoke to and about America will affect how voters think.

Trump should have pointed out that he hasn’t shut anything down. It’s Congress that hasn’t sent him a budget. In other words, to the extent that a fraction of the government is not working, Congress must act first.

Overall, having had almost 24 hours to think about it, I’d give Trump a B to a B+, and Pelosi and Schumer a D- to an F. Moreover, considering that Trump’s main goal, always, is to show that he’s not the insane monster the Left claims he is, he gets an extra half grade for coming across as normal, lucid, and concerned about Americans, raising him to a B+/A-.

Some have suggested a barrier is immoral. Then why do wealthy politicians build walls, fences, and gates around their homes? They don’t build walls because they hate the people on the outside, but because they love the people on the inside. The only thing that is immoral is the politicians to do nothing and continue to allow more innocent people to be so horribly victimized.

This is a choice between right and wrong, justice and injustice. This is about whether we fulfill our sacred duty to the American citizens we serve. When I took the Oath of Office, I swore to protect our country. And that is what I will always do, so help me God.