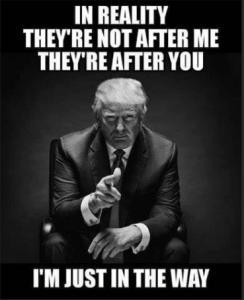 John Dean is about to testify that Trump’s actions amount to an unlawful obstruction of justice.  Jerry Nadler will invite Dean to explain how everything Trump did per the Mueller Report parallels something Richard Nixon did in connection with Watergate.  Then Nadler will invite Dean to call for Trump to be impeached.  I have no doubt John Dean will accept all of the invitations.

What is John Dean’s expertise?  He knows no more about the inner workings of the Trump Administration than any other citizen who has read the Mueller Report.   He does, however, know about political spying, criminality and covering up a criminal acts — unsuccessfully at least.

During the 1972 Presidential campaign, several private citizens who supported President Richard Nixon’s reelection bid were caught attempting to bug the DNC Headquarters at the Watergate Hotel.  Although President Nixon had nothing to do with the crime, he attempted to cover it up by using the agencies of government.  For instance, he had the CIA hinder the FBI investigation, targeted reporters with wiretaps, he used the IRS to audit a political enemy, and he attempted to bribe people involved.  John Dean, as White House Counsel, was the architect of the cover-up and was personally involved in destroying evidence.  Dean jumped ship at some point, offering to testify against Nixon in return for a lenient jail sentence.

Since getting out of prison, John Dean has been a hero to progressives.  He pretends now be a paragon of morals and ethics, attacking the GOP (but never Democrats) at every turn.  According to Dean, George Bush and Dick Cheney were worse than Nixon and should have been impeached.  And don’t get this worthless excuse for a lizard started on Donald Trump, whom he has attacked repeatedly since 2016.  Eh, it’s sold books and gotten him some MSNBC gigs.

Why should Republicans be salivating at the chance to question Dean? Let me count the ways.

Nadler wants to pretend that Trump is a reincarnation of Dick Nixon in the White House.  Fine.  Here are some points to bring out in Dean’s testimony.

DEAN IS NOT AN ATTORNEY.  He was disbarred in 1975 for multiple violations of the law and professional ethics and he has not practiced law since.

THERE WAS NOTHING FOR TRUMP TO COVER-UP.  Nixon tried to cover-up an actual crime.  As to Trump and his administration, there was never any crime to cover up.  Trump did not commit the crime of conspiring with Russia to affect the 2016 election.  NO ONE in Trump’s administration committed the crime of conspiring with Russia to impact the 2016 election. (The same cannot be said of Obama, who knew about Russian interference and did nothing to stop it, or about Hillary’s campaign, which worked actively with Russian sources to bring down Donald Trump.)

THE APPLICABLE PARALLEL IS NOT THAT TRUMP IS ANOTHER NIXON, IT IS THAT TRUMP IS IN THE DNC’S SHOES, CIRCA 1972. Just as the clownish conspirators who brought Nixon down spied on the DNC, in 2016, the spies were out too — only this time it wasn’t clowns doing the spying on the DNC but was, instead, the Obama administration, using the most powerful tools of government, spying on Trump and his campaign. Trump is not in the position of Nixon in 1972; he is in the position of the DNC circa 1972.

WATERGATE WAS A CIVILIAN EFFORT TO USE UNLAWFUL MEANS TO AFFECT AN ELECTION.  SPYING ON TRUMP AND THE TWO YEAR INVESTIGATION PREDICATED ON NO PROBABLE CAUSE IS MUCH MORE DANGEROUS THAN ANYTHING ASSOCIATED WITH WATERGATE.  Watergate was a burglary to gain an advantage during an election.  The Special Prosecutor’s two-year, $35 million investigation into Trump represents an attempt by members of government to overturn a democratic election, as do the efforts now to impeach Trump for obstruction of a criminal investigation.

COMEY’S ABUSE OF OFFICE. James Comey, in 2017, then the Director of the FBI, took the unprecedented step of publicly announcing that the Trump administration was being investigated for the crime of conspiring with Russia as regards the 2016 election.  That violates DOJ policy of not commenting on ongoing investigations.  Even before that, the FBI Director repeatedly told Trump that Trump personally was not under investigation — yet after making his public announcement in Congressional Hearings, Comey refused repeated orders from the President to correct the record.  That was ample justification to fire Comey.

Let the clown show begin.  Don’t give these seditious bastards an inch.