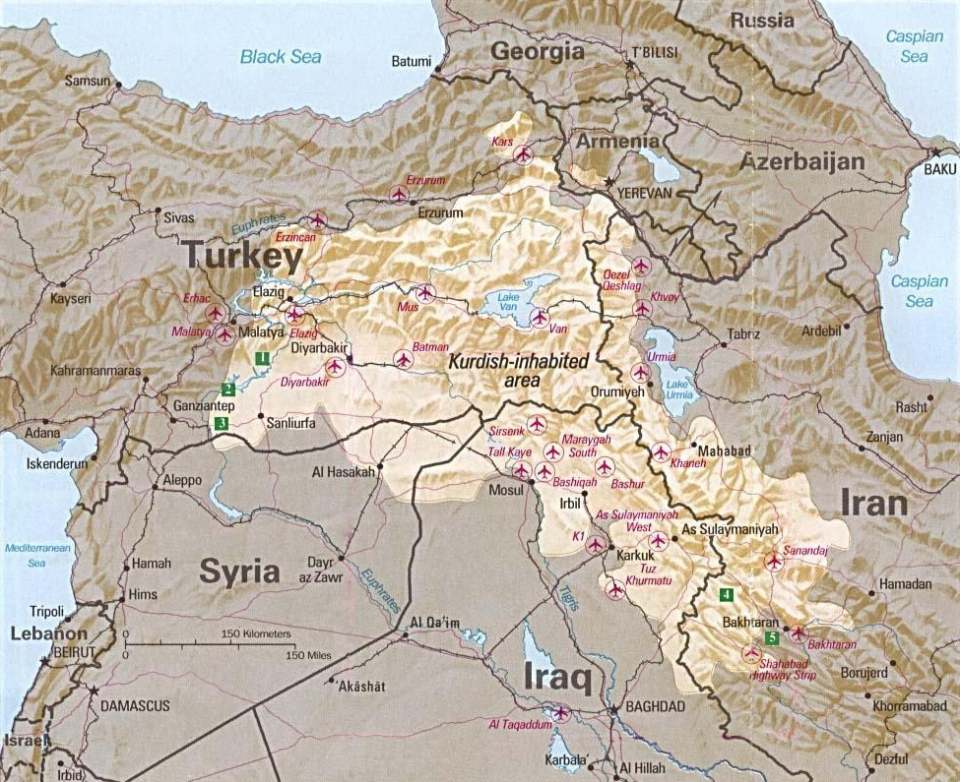 Don’t get carried away with the claim that Trump is abandoning the Kurds. “The Kurds” are not a single homogeneous people aligned with American values.

In an earlier post, I argued that Trump is retreating from the Wilson Doctrine (America must use her blood to bring democracy to other lands) and the Obama Doctrine (America is toxic and can remedy that only by fighting wars against her interests) and instead creating a Trump Doctrine: In any war to which America sends her troops, there must be an immediate and obvious benefit to America. To this end, he’s withdrawing troops from Syria because America cannot endlessly police the internecine warfare that is endemic in the Muslim world.

The objection to America’s withdrawal is that America is abandoning the Kurds. That objection went into overdrive when Turkey instantly bombed “the Kurds.”

Except it’s not that simple, at least according to one source. There are no generic “Kurds.” As with every other region in the Middle East, there are Kurdish factions and not all of them are our friends.

Take a look at this information from a retired Special Forces officer and see if it makes you see things differently (emphasis mine):

OK Folks, “Plickee” everybody is going nuts over the removal of about 100 US Troops from Prison Camp Guard duty in northeast Syria and to bring them and their support units home. Folks before you touch the Zippo to the gas soaked scalp, let us cut the BS from the Congressional Employees of the Military Industrial complex.

You can’t tell the players without a scorecard, the map below shows the area occupied by the Kurds over the centuries. Now if you look at the Syrian/Turkey/Iraq border area, that southeast area of Turkey is now mostly flooded by the Ataturk Dam Project, you will see few roads, few towns. Few areas to stage a campaign against the Kurds in Iraq.

Now there are four different Kurdish groups, we will work on two, the Peshmerga, our allies, over 60,000 strong well equipped, extremely well led, and superbly trained by the “Quiet Professionals” of the US Army Special Forces, and who President Trump will continue to supply and support, even with air cover, if necessary. They are allied with the Syrian Defense Force, and they will probably work together, surrendering Syrian land, if necessary, and moving East back to their homeland.

The other group, mostly concentrated in eastern and southeastern Turkey are the PKK, a Marxist/ Maoist group who have been on the US and world Terrorist list since at least the mid 1980s, they have been the PROVOS, Bader-Meinhof, Japanese Red Army, Black September like group of Turkey blowing up civilians, murdering etc. They are not our friends and allies. They are the Turkish target, oh and the Syrians are also in that area, so if Turks and Syrians murder each other off, don’t cry for me Argentina.

Now if the Congress want to do the right thing and establish a formidable ally, who would gladly work with our Israeli, Jordanian, Azerbijanis and other allies in the area, they will petition the UN, ok, you have to check the box, and help the Kurds establish, Kurdistan, and announce to all comers that they are our friends and allies, Iran would go berserk, but then again how many more times can they scream “Death to America.”

Ike warned of the “Military Industrial Complex” (MIC), he led millions of troops and freed millions of people. Lindsay Graham, a USAFR JAG officer, and the other Congresscitters only claim to military fame is how much money the MIC had bribed, I mean donated to their accounts.

The same source adds more information about the factions amongst the Kurds:

OK Folks, some folks have pilloried me for my post about the situation in Syria, and my agreement with pulling the 50-100 us troops from the ISIS Prison Compound and out of way of the Turkish invasion of Northern Syria, screaming that we have abandoned an ally.

We were working with the PESH and SDF against a common foe, a foe the Kurds have been fighting for decades if not centuries, I believe that we should declare our support for a Kurdish Homeland, a Kurdistan, they deserve one.

Erdogan announced this invasion to whack the PKK months ago, he was coming, he could not back down, he is hanging on by a thread and any sides of weakness and he is gone, a maniac that can’t change his mind, is going to do dumb things.

What if we left them there, made them another Bataan, another Wake Island, and they were attacked in the process of the Turkish attack on the PKK, are we going to drop the 173rd Airborne, the 82nd Airborne, in to reinforce them, against the massive armor and artillery y’all have given them (where they came from is another question), don’t think so, remember they bought the Russian Air to Air missiles, and C-17s are big targets. Guess the stuff we gave the Kurds is worthless, all those vehicles, and ordinance is worthless, and they can’t continue the fight without our 50-100 GIs..

If they got massacred in the fighting, are you going to go with the Notification Teams to each of those one hundred households, and then to all the homes of all those killed, wounded and missing in action when we have to declare war on Turkey for their deaths.