The NYT gives us Thanksgiving as seen through a neo-Marxist lens.  It is not only political foolish, but historically inaccurate. This is a response. 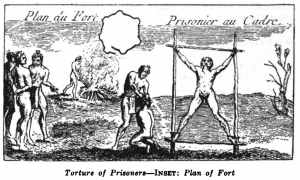 The NYT gives space to a  lily-white George Washington University History Professor, David J. Silverman, who, surprise, thinks that Thanksgiving is a tragedy of colonialism.  He states that the “Native American past and present tend to make white people uncomfortable because they turn patriotic histories and heroes inside out and loosen claims on morality, authority and justice. ”  According to this donkey’s ass, white people were evil, while red people were pristine, good, and with a culture that was “every bit as ancient and rich as in Europe.”

Thanks for the Howard Zinn version of history, professor.

The reality is that all of the Eastern woodland Indian tribes were a stone age people without iron metallurgy or even the wheel.  They were in constant warfare with other tribes each trying to take the other’s land or defend their own.  When the professor condemns Europeans uniquely for conducting coastal raids on Indians in the 16th century and taking slaves, the proper response is not “how evil the Europeans were,” it’s “are you kidding, you putz?”

One, the Pilgrims didn’t do any of that.  Two, the fact that others than the Pilgrims did, well, welcome to the brutality of life in the 1500’s, whether Indian, European, Middle Eastern, etc.  True, those raids represented a tiny sliver of European society at its worst.  But what does it say that such raids were simply the equal to the traditional  Indian society of the day?  Will you tell us the tale of Hannah Duston next, Professor?

Moreover, most, if not all of the  Eastern woodland tribes, when it came to warfare and treatment of prisoners had customs that were extremely savage and horrifyingly brutal, such as their penchant for ritually torturing prisoners to death with fire over a period of a day or more.  Their morality was not — nor was it superior to — the Judaeo-Christian morality.  Their justice was ultimately based on might makes right, and that was not — nor was it superior to — the Anglo legal system.   To the extent that the worst aspects of Indian society did not survive their contact with Europeans, we and they should all, dare I say it, give thanks this day.

And sorry, Professor, but Indian culture was hardly “ancient.”  Their lineage was ancient, but so is every human’s. The Eastern woodland Indians had no writing or even a rudimentary alphabet.  They gathered together for safety and told stories they heard from people still alive from one or two prior generations, but that does not an “ancient and rich” culture make.  It was not, in 1621, the equal of Europe of the time.  It wasn’t even a shadow of Europe.

The first meeting between the pilgrims and the Indians was, in fact, “consensual and bloodless.”  The fact that, long after every one of those Indians and Pilgrims who met in 1621 was dead, their descendants fought a war does not in any way change that initial reality, nor for that matter even color it.  Nor does the reason the Wampanoag made allies of the Pilgrims — for their own defense — make their motives or the motives of the Pilgrims somehow immoral.  It is the story of civilization.  It may surprise you to learn, professor, but if you study history you’ll find that people have been banding together for mutual defense and to bring stability and peace to their land since before the written word.

Lastly, this donkey’s ass of a Professor asserts that “the Indians’ legacy [supposedly proclaimed by Thanksgiving] is to present America as a gift to white people — or in other words, to concede to colonialism.”  My, but this professor certainly seems color-centric, doesn’t he?

First, American Indians’ limited run as wholly independent tribes was written by circumstance the moment they came into contact with Europeans.  A stone age culture will simply not survive in daily contact with a far more technologically advanced culture.  They will adopt technology and seek out goods that will make their life easier and that will inevitably change their societies.  They will, over time,  blend in with the more advanced culture, hopefully adding good things to what then becomes a shared culture.

Second, if they go to war with the more advanced society (a decision that may seem eminently reasonable at the time, for they are fighting for their survival), they will ultimately lose and pay the price for it, just as they would in their own inter-tribal wars.  And that is a major part of the story of Indian and European relations in the 17th and 18th century.

Today, if the Wampanoag Indians wish to live separate and apart from the rest of this country, our nation affords them that option.  If they wish to maintain knowledge of their history and origins, their triumphs as a people, it is well and good that they should, as we all should with our own histories.  But portraying the Wampanoag as victims and the Pilgrims of 1621 — or “white people” of today — as evil oppressors has everything to do with neo-Marxist progressive politics, not actual history nor the holiday of Thanksgiving.  Both this professor Silverman and the NYT are a disgrace.

In 1621, the Pilgrims wished to thank God and the Indians for their help.  It is their celebration and wishes for peace and prosperity that we honor, not just the Pilgrims and not just the Indians.  We are a nation where to be an American means that you hold to certain ideals of freedom, not whether your heritage is European, Indian, African or anything else.  We are all blessed to be here this day, Professor.