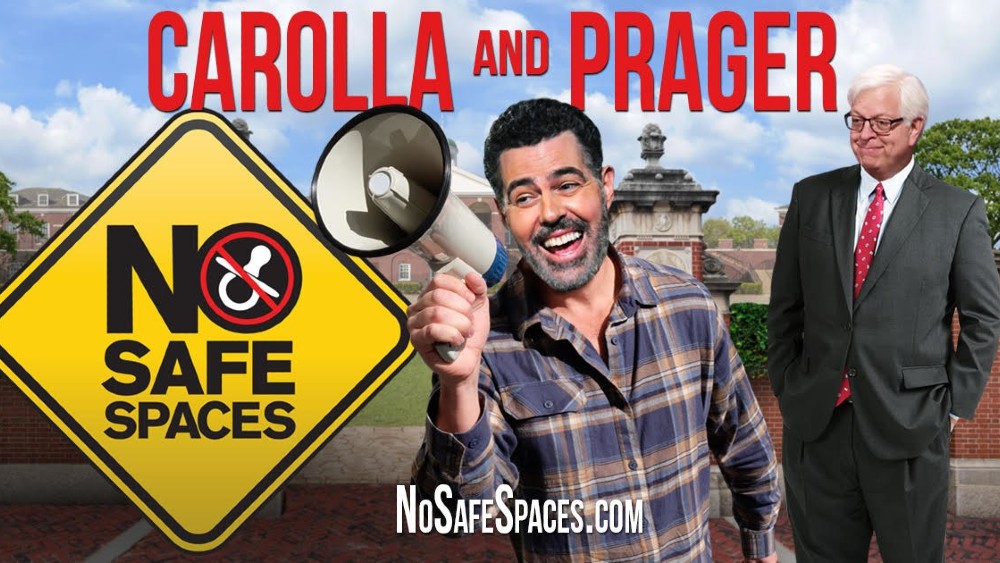 No Safe Spaces skillfully, intelligently, and amusingly exposes the intellectual rot eating away at Free Speech in American higher education. Go see it!

I went to see Adam Carolla’s and Dennis Prager’s No Safe Spaces this afternoon and I had just one problem with the movie: At a huge multiplex in Knoxville, there were only eight people in the audience. It should have played to a packed house. And no, the large number of vacancies wasn’t because I was seeing the movie on a Sunday afternoon. I’d originally intended to see No Safe Spaces on a Saturday night — you know, a movie night — so I checked then to see if there were seats remaining and, indeed, there were seats available. Lots of them. On the theater’s seat-booking site, all but two seats were still empty on a Saturday night.

The truth is that every American ought to see this movie. The reality is that only conservatives who are already worried about the death of free speech in America will attend it. On the Left, they’re smugly happy with their increasing ability, both on campuses and in corporate America, to shout down and censor anything they don’t like. And in the vast middle, the Americans who need to start to care, people probably aren’t even aware that the movie is playing.

I wanted to tell my Little Bookworm, in her last year at an Obscenely Expensive (Hard Left) Liberal Arts College in the Midwest to go see the movie. I knew that, as she is maturing (and having problems with her excessively sensitive roommates), she might have made the effort to go. I didn’t bother telling her, though, when I discovered that the movie isn’t even playing in her college town, a place in which a message about free speech and open minds could do a lot of good.

Carolla and Prager are the two pillars anchoring the No Safe Spaces. Carolla presents himself as a working class yob and comic (and also America’s most popular podcaster) who has a visceral belief that we are destroying our youth by mentally coddling them and that the answer is free speech for them and for everyone. Prager is the Jewish intellectual, the college educated man who spent time in the Soviet Union during the heyday of its totalitarianism. Prager too is a free speech fanatic. Both men are agreed (rightly) that free speech — true free speech, not the European or Canadian simulacrums — is a uniquely American attribute and that its destruction is the first step on the road to totalitarianism.

The genesis for the movie, and the idea that gives the movie its structure, was a series of lectures that Carolla and Prager gave while visiting college campuses across America. Because they were giving lectures, the movie could easily have bogged down into just being a giant TED talk, with two speakers in different venues. To avoid this, the writer and director employed a variety of creative approaches. The ones that I can remember offhand are:

I found the segment on Lindsay Shepherd particularly powerful. You may not be too familiar with her because what happened to her took place in Canada, but it could easily have happened here. Shepherd, a Canadian liberal, showed her students a video in which Jordan Peterson debated a transgender activist. She showed it without taking sides, just so that they could see that there were two sides out there.

Some snowflakes . . . er, students complained that they couldn’t handle Jordan Peterson. According to them, Shepherd had created a dangerously “toxic” environment for them because Peterson’s arguments challenged their world view. Wilfred Laurier University, the Canadian school at which Shepherd taught, came down on her like a ton of bricks.

What made the Shepherd segment in the movie so power for me was that she recorded the meeting at which her administration lambasted her. The recording is staggering, both for its totalitarian view about limiting speech so as to indoctrinate young minds and for the mindless incoherence with which the faculty representatives speak. Not to mince words, these people have minimally functioning brains that work only as conduits for propaganda.

I was familiar with most of the people interviewed and can say that they showed themselves well. They come from across the political spectrum, from conservative to Leftist, but all share an abiding belief that the First Amendment’s promise of free speech is the one thing that binds America and that allows us to move the political needle without resorting to violence. It’s no surprise, then, that violence comes almost entirely from the Left, which cannot compete in the speech arena because its ideas don’t hold up well to scrutiny and challenge.

Regarding the handful of free speech advocates from the Left, it was a refreshing surprise to see Van Jones speak up so strongly for the First Amendment. I’m no fan of Jones’ politics, because he is a hard Left, racial grievance social justice warrior. Having said that, Jones believes that one fights these battles through speech, not through censorship. (Jones is also surprisingly open minded in that he is willing to give credit where he thinks credit is due. Thus, he was a Progressive who praised Trump’s criminal justice reform, something most other Leftists were unable to bring themselves to do.) Outside of Jones, the Leftists in the movie — the students and activists — do not show to good advantage.

One of the things that’s quite clear in the movie is that the increasingly aggressive “transgender” movement is a vehicle for the growing effort to clamp down on “hate speech” — which is, of course, any speech with which the Left disagrees. Although the movie does not make the point explicitly, I was struck by the fact that the uptick in authoritarian outrage across college campuses and in speech-controlling hi-tech companies happened almost simultaneously with the so-called “transgender” movement’s leap into the big time.

As you may recall, Jordan Peterson became prominent because he took an open stand against the Canadian law mandating that people must use a so-called transgendered person’s preferred pronouns. Never mind that we’re now told there are an infinite number of gender identities; never mind that these people often change pronouns as fast as they change clothes; and never mind that there is no medical or scientific basis for believing that transgenderism even exists.* Stripped of its obsessive prominence in academia, sports, and the media, transgenderism is currently the purview of perverts, tragically mentally ill people, and weak male athletes who see opportunities in competing as women.

In a sane world, perverts would be locked up, mentally ill people would be given the treatment they desperately need, and weak male athletes would be ridiculed, not celebrated. In our insane world, the Left has latched onto the self-identified “transgendered” crowed as the perfect pipeline for infusing young people with a deep and abiding hostility to any speech that will hurt someone’s feelings.

It’s noteworthy that so-called transgendered people seem to have exquisitely sensitive feelings. Moreover, to the extent that an inordinate number of so-called transgender activists are men who think they’re women, they present with all the aggression of men and all the emotionalism of women.

Another force behind speech suppression, of course, is race, but I think people like Candace Owens (who appears a couple of times in the movie) are beginning to change that trend. Her #Blexit movement, along with Trump’s roaring economy and the Democrat Party’s obsession with illegal aliens who mostly take jobs away from the African American community, shows up in the 34% of blacks who support Trump. My hope is that Owens’ efforts and the black communities’ realization that the Left has been using them for decades, may help them return to traditional constitutional values — values they strongly support before the Left got hold of them in the 1960s and beyond. The so-called transgender movement, though, shows no sign of slowing its assault on every American institution.

While No Safe Spaces focused mostly on academia, which is Ground Zero for churning out “thought leaders,” we in the movie theater got a nice insight into precisely what those thought leaders do once they’re out of college. Many get jobs in communication fields. You could see the effect before the movie started, when we were assaulted with 30 minutes (!) of commercials and movie previews.

I don’t remember the products advertised, but what struck me about the commercials was that they were so multicultural in casting that the only whites allowed had to be gay couples. There was also an ad for a new lesbian-themed TV show on Showtime and a very loud preview for the upcoming, exceptionally nasty movie Bombshell, which purports to show that Fox News is a White Supremacist version of the Playboy mansion in its heyday. Interestingly, no one seems to be contemplating a movie about Matt Lauer’s NBC or about Harvey Weinstein. Funny that. There was also a movie about a black man wrongly convicted in Alabama. For the Left, it’s always 1955.

After the movie began, it was easy to tie together what was happening on college campuses and what we had seen in those commercials and previews. The latter were the products of minds incubated at the myriad colleges and universities across the Western world that no longer teach humanism and critical thinking. Instead, the minds behind these commercials and previewed movies were as firmly indoctrinated as any Hitler Youth ever were in Nazi Germany.

No Safe Spaces is a loud tocsin warning us that, unless we act quickly, things will degrade very rapidly in an America in which the young people hate and fear free speech, and prefer only to hear speech consistent with that they learn from their Leftists teachers (and keep in mind that these Leftist teachers, complete with their transgender messages, are hard at work beginning with kindergarten and moving up from there).

And that, my friends, is why the worst thing about No Safe Spaces was the empty theater. If you can, go see the movie and take a friend. It’s eye-opening and the message it sends is an important one for America’s survival as a bastion of liberty in a hard, cold world.

* Having said that there is no medical or scientific basis for transgenderism, in part because it’s politically incorrect to study it, I do have a theory that no one has ever looked into, at least so far as I know. I’ve long wondered whether the fact that the majority of American women use the Pill or other hormonal forms of birth control affects the women’s hormones in a way that lingers into pregnancy and transfers to the baby in utero. This excessive wash of feminine hormones might explain some of what’s going on.

Of course, the treatment for a biologically male baby washed with too much estrogen in utero shouldn’t be more female hormones, which cause cancer and sterility, or mutilating surgery. Same goes for confused biological women. Instead, the most sensible way to treat men who feel too feminine and women who feel too masculine should be to give them hormones aligned with their biological sex. In a sane world, we’d do that before mutilating and sterilizing them.