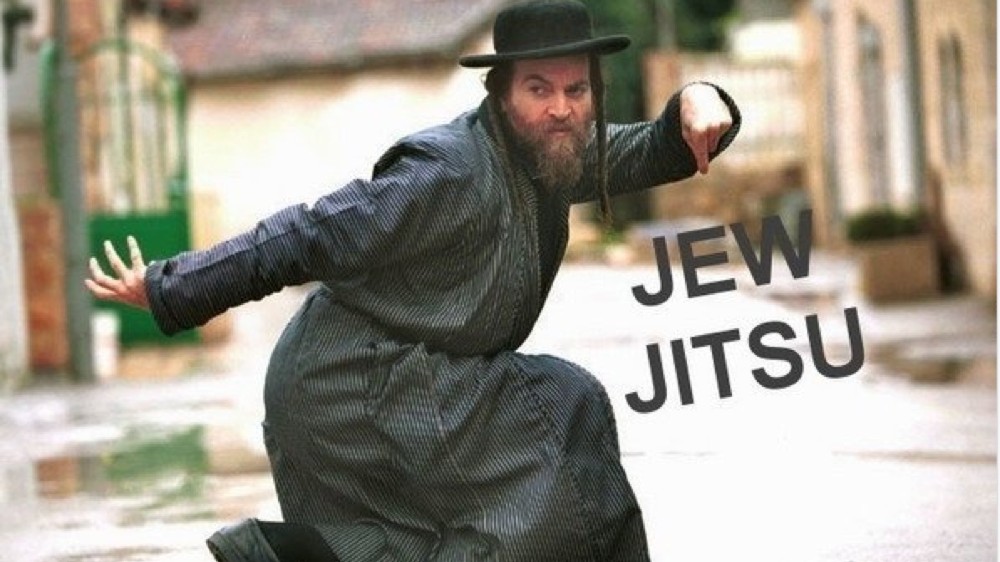 The Hanukkah attack didn’t arise in a vacuum: World politics and history reminds us that Jews cannot look to others for help but must defend themselves.

Ever since World War II, the mantra has been “Never Again.” I hope you notice how carefully wrote that sentence in passive voice, something I normally avoid. I did so to make a point, which is that, outside of Israel itself, no one is actually in charge of implementing the idea that there should never be another Holocaust. It’s a phrase without bite.

Here’s an analogy to explain what I mean: If you’ve ever taken a first aid class, one of the things you learn is that, if you are the one leaping into action to administer CPR, you can’t delegate the task of calling 911 simply by hollering, “Someone call 911!” That statement creates a sense of diffused responsibility that often means no one calls 911. Instead, I’ve always been taught that the person taking charge needs to be specific: “You, the guy in the red plaid shirt, call 911.”

Currently, Israel is both the person taking charge and the guy in the red plaid shirt. It has taken “Never Again” seriously and has turned itself into a veritable porcupine of defensiveness along with (although only when attacked) a honey badger’s will to fight for survival. Outside of Israel, though, one sees that around the world, and especially in the world’s more totalitarian places (and this is true whether the totalitarianism rejoices under the name of some variation of either “socialism” or “right wing”), the phrase “Never Again” has become as meaningless as the weak non-directive phrase “someone call 911.”

Germany has been repeating “Never Again” like a mantra for over seventy years, even as it’s taken to inviting into Europe millions of people who out-Hitler Hitler when it comes to the virulence of their Jew hatred. In France, the judiciary essentially announced that for Muslims to say they’re stoned is a complete defense to anti-Semitic murder.

England walked itself to the cliff’s edge with Corbyn, only for the ordinary working people in England to pull back. It’s still unclear to me, though, whether these Brits were responding to Corbyn’s communism, his anti-Semitism, or his fealty to the EU. Boris Johnson, bless him, is promising a retreat from the rabid anti-Semitism that leaked into the country with Corbyn’s Labour party and Britain’s open door policy for people from Muslim countries. I’m in wait-and-see mode, though, as to how the rest of institutional Britain (comprised of Remainers and Leftists) handles Britain’s rising overt and covert anti-Semitism.

Here in America, the media keeps hollering “Never Again,” while assiduously turning its eyes from those who need to be tagged with that reminder: Muslim communities, college campuses, as well as Leftists generally and, sadly, black Leftists specifically.

I’m not denying that there are white neo-Nazi anti-Semites and that their ideologies and actions need to be addressed. However, I see no evidence that these pathetic fringe haters occupy any realty in the heart of the Republican Party.

Whether at home or abroad, outside of Israel, the reality is that much-bandied-about phrase “Never Again” isn’t going to save any lives. It’s especially not going to save the lives of Jews living in communities that rely heavily on the government for their protection, such as the Orthodox communities in New York or New Jersey. The governments in those places like the “Never Again” mantra, but they’re Leftist to the core, which means they’re authoritarian, which means that at a fundamental level they really don’t like Jews.

For those wondering at this point, why these varying communities are so hostile to Jews, here are a few answers, ranging from community specific to totalitarian generally.

1. Islam. Islam has community specific anti-Semitism, for it’s hardwired into their core religious doctrine. You cannot be a good Muslim without hating Jews and desiring their destruction.

3. Country-specific anti-Semitism. Certain countries have such long histories of anti-Semitism they just can’t seem to shake it — and by that I mean most of Europe. Before anti-Semitism anti-Zionism was the vector by which the modern Democrat party became increasingly anti-Semitic, America had only temporary, small pockets of anti-Semitism that people brought from the old countries. The Founders were philosemitic and America is committed to individual liberty, both of which have constrained virulent anti-Semitism in America.

In the Middle Ages, the Catholic Church forbade charging interest on money. Money, of course, is a product like any other. If there’s no price for allowing someone to use your money (which is what interest is), the borrower has no incentive to pay the money back and the lender certainly has no incentive to lend. But the reality is that borrowing money is a necessity for a functioning society – and especially for those in the upper echelons, for whom spending money is an integral part of retaining loyalty and power.

Meanwhile, Jews in Europe during the Middle Ages were barred from most occupations and routinely banished from their homes. Unconstrained by the Christian church’s wholesale ukase against money lender, a small number got into the business.

For some, who loaned to kings and other aristocrats, money lending meant wealth and such protection as the monarch was willing to extend. But they were always holding the tiger by the tail, for if the king and his friends could not repay the loans or had need of a scapegoat, those very visible Jewish lenders were so handy, whether they were burned at the stake or exiled. Either way, the loan vanished and the common people were pacified.

Despite the fact that lending money was confined only to a small percentage of Jews, these Jews, because they were visible and scapegoated, became the avatars of money – and, once Marx came up with his socialist ideas, which he coupled with his own self-loathing, virulent anti-Semitism, being the avatars of money was magically transmuted into becoming the avatars of capitalism. To anyone who leans Left, Jews continue to be the visible symbol of every bit of real or imagined oppression visited upon the workers of the world.

5. Authoritarianism. And then there’s the generalized authoritarian hatred for Jews, something that applies equally across national, ideological, and religious lines. I believe this happens because Jews stand for abstract justice and morality. Not every individual Jew of course, but Jewishness itself because the Torah (the first five books of the Bible) stands for these principles.

Significantly, these principles are are not man-made dictates. Instead, they come from a great, abstract, all-powerful God who insists that individuals are made in His image and that humans must hew to certain behaviors in order to be in good odor with this Being. This is antithetical to authoritarianism, which invariably sees those in power looking to themselves as the all-powerful beings who dictate rules of behavior and who take it upon themselves in arbitrary fashion to decide who lives and who dies. Authoritarianism and Judaism are completely incompatible, and the latter is a continuous and living indictment of the former’s evil.

If I’ve been persuasive, you now accept

(a) that, outside of America itself, a vast cohort of people – Muslims, Socialists, Authoritarians, Pre-Modern Christians and Europeans and, sadly, American Blacks (both as Muslims and people steeped in socialism) – hate Jews and

(b) that, while people and nations pay lip service to the concept of Never Again, they don’t mean it or, even if they mean it, they aren’t going to expend any energy towards making it a reality.

With all these forces at work, no wonder it comes about that Orthodox Jews in New York and New Jersey, all of whom are visible in their unique clothing and in their tightly knit neighborhoods, are targets for whatever anti-Semites come along. Proximity means that the nearest targets are blacks who, for decades, have been on the receiving end of a toxic blend of anti-Semitism arising from the Black Muslims and the Left.

And what are Jewish groups and the media doing about these attacks? Both are insisting that the governments in New York and New Jersey step in to end the violence.

We know, though, that these demands will not be met because both states suffer from Leftist government, inefficient bureaucracies, and police departments that, while well-meaning, have been told since 2015 to stand down when faced with crime emanating from the black community. New York made things even worse this year by enacting laws that make bail meaningless, so that those who attack Jews are on the streets within hours of their arrest. If you incentivize crime – and removing punishment is an incentive – you will get more crime.

So, what should the Jewish communities do? Very simple: They need to stop looking to others for help because it’s not going to come. The first thing they need to do is to arm themselves. They are blessed to live in a Second Amendment country. They do not need to be transported on death trains. They do not need to be lined up before pits and executed or marched into gas chambers. They can buy guns, get trained in their use, and make sure to jump through whatever the hell hoops Leftist states put in the way of concealed carry.

Nor is it hypothetical that arming themselves will work. Israel, of course, is a perfect example that Jews who bristle with weaponry that they’re ready to use survive. Just today in Texas, armed parishioners at Sunday services, along with an armed security guard, killed a person looking to be yet another mass shooter. Sadly, the shooter managed to kill one person and seriously injury another before an armed church member shot him dead (and good riddance), but imagine how much worse it would have been had there not been good guys with guns ready to take on that bad guy with a gun.

The other thing is that those Orthodox Jews who are physically able need to learn basic self-defense. They are sitting ducks because the anti-Semitic perpetrators know that they lack any skills to fight back. Predators are opportunists. They don’t go for the hard target; they go for the soft one. If they know that the Orthodox man or woman they attack will turn into a wild vengeful fury of punching, eye gouging, throat jabbing, and groin kicks, most will opt not to attack.

I’m not saying that New York and New Jersey should not apply to anti-Semitic thugs existing laws for assault, attempted murder, and actual murder. We also need to change a culture that’s giving free rein to the worst impulses in the Leftist, Muslim, and Black communities. Still, at the core level, Jews need to step up to defend themselves.

I’m not well-versed (heck, I’m not at all versed) in the specific rules governing life as an Orthodox Jew. But I’ve read my Torah and the one thing that’s very clear to me is that God didn’t raise no sissies. Before the sojourn in Egypt, and definitely after the return to Israel, God made sure that Jews fought to defend themselves. I cannot imagine that God would deny that same right of self-defense to American Jews in besieged communities.