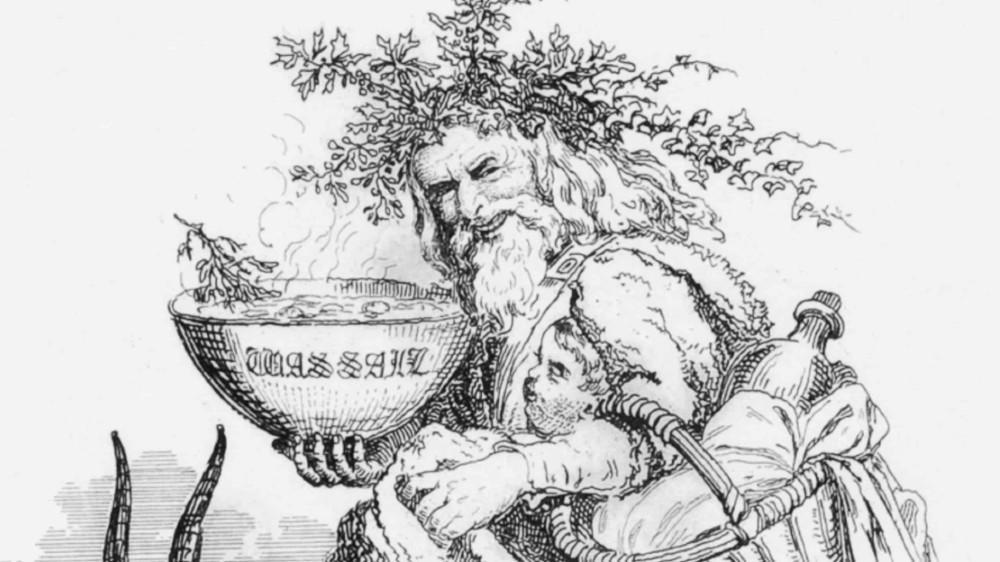 Holidays and Observances on January 5

Today is the 12th day of the 12 Days of Christmas and the the Eve of the Epiphany. Tonight is commonly referred to as 12th Night, and marks the end of the Christmas season. Since medieval times, 12th night was celebrated in parties with special foods and drinks. Because the British referred to their special Christmas punch as wassail, singing Christmas songs came to be referred to as wassailing. Recipes for wassail punch varied greatly, with the only general standard being that they were usually a hot, mulled, mildly alcoholic punch served from a “wassail bowl.”

Great bowls turned from wood, pottery or tin often had many handles for shared drinking and highly decorated lids. Traditional pubs in England sometimes boast antique examples of wassail bowls. This tradition informs the first stanza of the traditional carol Gloucestershire Wassail, variations of which were known to have been sung as far back as the 1700s, and possibly earlier:

Wassail! wassail! all over the town,
Our toast it is white and our ale it is brown;
Our bowl it is made of the white maple tree;
With the wassailing bowl, we’ll drink unto thee.

Shakespeare used this eve as the title for one of his plays, Twelfth Night, because it was written expressly to be first performed during a 12th night celebration circa 1602. The play contains some memorable lines that have since passed into the common lexicon:

That said, other than the title, the play has nothing to do with 12th night and its plot was one of Shakespeare’s lesser efforts.

The beginning of the Industrial Revolution On January 5, 1769, James Watt received his first patent for an early version of his revolutionary steam engine, setting the stage for the Industrial Revolution.

The industrial revolution coincided with Adam Smith’s exposition on free market capitalism and the growth of world trade during the Age of Sail. The combination of these actual events and new ideas meant that, for the first time in history, the general population’s standard of living rose on an undreamed of scale undreamed. It is not from the benevolence of the butcher, the brewer, or the baker that we expect our dinner, but from their regard to their own self-interest. We address ourselves not to their humanity but to their self-love, and never talk to them of our own necessities, but of their advantages.

No one proved that maxim better than Henry Ford, the man who revolutionized transportation, manufacturing, and the car industry.

What Henry Ford did in the early 20th century was to bring cheap, well-built cars to the masses. He was able to accomplish this through innovative assembly-line production methods and building a professional work force with low turnover. Before the days of minimum wages, Henry Ford was able to pay a high price for top-flight labor because his products returned sufficient wealth. Two Henry Ford quotes illustrate his philosophy as to labor:

“We try to pay a man what he is worth and we are not inclined to keep a man who is not worth more than the minimum wage. . . . “

Everything in a free market is ultimately subject to the simple laws of supply and demand. That includes labor and employees as well as products, which it is why it is no surprise at all that, today, two things are happening as the labor market shrinks:  One, low skilled blacks are filling the jobs formerly taken by illegal aliens.  Two, as the economy expands and the labor market tightens, wages are rising without any malignant government intervention and those wages in working class jobs are rising at the highest rate. Henry Ford would understand. 1477 – Charles the Bold is defeated and killed in the Battle of Nancy by René II, Duke of Lorraine’s forces, marking the end of Burgundy as an autonomous kingdom vying with France and the other major powers of Europe. France claimed most of the Burgundian lands, while the Hapsburgs swept up the rest.

1757 – Louis XV of France survives an assassination attempt by Robert-François Damiens, the last person to be executed in France by France’s particularly brutal variant of drawing and quartering. Louis XV would finally die of small pox in 1774, setting the stage for France, under his grandson Louis XVI, to support the American colonists during the American Revolution.

1781 – American Revolutionary War: After Benedict Arnold turned coat, the British gave him command of 1,600 men and turned him loose to raid in Virginia. On this day, Arnold made a surprise raid on Richmond, capturing, then sacking and burning most of the city. Ultimately, Arnold’s command, while an irritant, had no effect on the outcome of the War.

1895 – French army officer Alfred Dreyfus is stripped of his rank and sentenced to life imprisonment on Devil’s Island. I just addressed the Dreyfus affair on December 22 as a major event and will not repeat it beyond saying that the Dreyfus affair led directly to modern Israel.

1919 – The German Workers’ Party is founded in Munich this day by the anti-capitalist and anti-Semitic Anton Drexler. Within a year, the Party’s most famous member, Adolph Hitler, would join.

1925 – Nellie Tayloe Ross of Wyoming becomes the first female governor in the United States, winning a special election to complete the term of her deceased husband, Gov. Frank Lucas. A strong supporter of prohibition, she failed to win reelection in 1926.

1933 – Construction of the Golden Gate Bridge begins in San Francisco Bay. When it opened for traffic four years later, it was then the longest and tallest suspension bridge in the world, with a main span of 4,200 ft. and a total height of 746 ft.

1974 – The warmest reliably measured temperature within the Antarctic Circle, of +59 °F, is recorded at Vanda Station.

1779 – Stephen Decatur, the most important figure in the post-Revolutionary War U.S. Navy. He became famous for his actions during the Barbary War, and he served with heroism and distinction in the Quasi-War with France, and the War of 1812 with Britain.

1066 – Edward the Confessor, the last Anglo-Saxon King and last of the House of Wessex. His death set in motion William the Conqueror’s invasion of England.

1589 – Queen Catherine de’ Medici, who had married Henry II of France and given birth to three future French Kings. She was the most powerful women in 16th century Europe and was often the person actually running France. ,

1933 – Calvin Coolidge, United States Vice President under Warren G. Harding, he became President after Harding died in 1923. In 1924, Coolidge successfully ran for president. He was a taciturn man who believed in small government and free market economics. He took over the Presidency following a series of scandals under Harding. He is credited with seeing justice done and restoring confidence in the Presidency.

1943 – George Washington Carver, the most prominent black scientist and inventor of the first half of the 20th century.