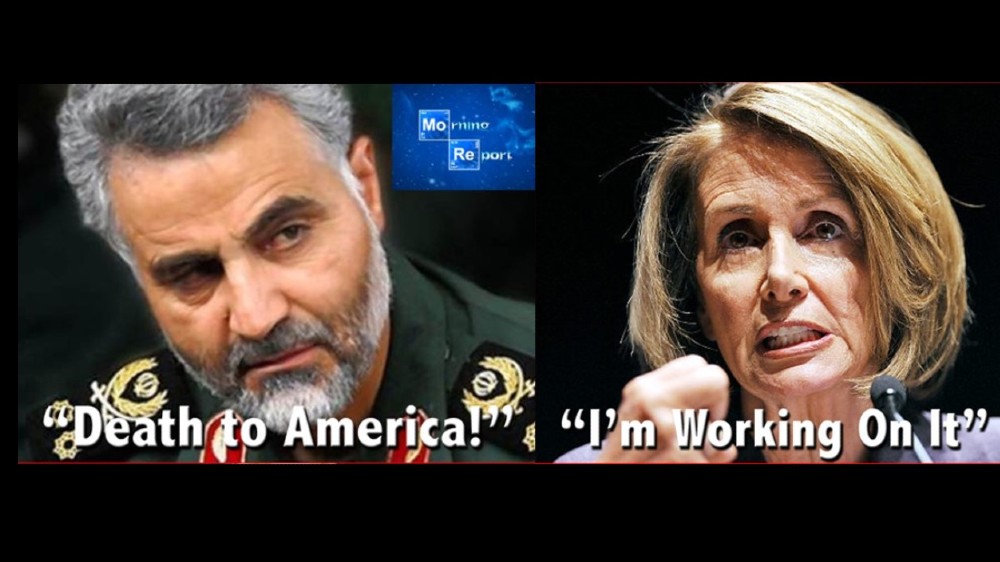 Tomorrow, on January 9, Nancy Pelosi will push through the House a non-binding resolution that would tie the President’s hands from ever attacking Iran – or presumably any Iranian found anywhere in the world, including Iraq – under any condition, without first getting approval from Congress.  The resolution, Pelosi tells us, is necessary because President’s Trump’s ordering of the liquidation of Soleimani was “disproportionate” and “reckless.”  Trump, she says, has no effective plans for engaging with Iran.  Moreover, she says that such a resolution is necessary to protect Americans and that we need to resume the diplomacy of the Iran Deal.

If such a binding resolution were ever passed, it would be patently unconstitutional. But that will never be at issue here. Pelosi’s resolution is pure election year politics.  Is it smart politics? Or is the progressive left – including all Democrat Congresscritters and the media – so far gone into the pitch blackness of Trump Derangement Syndrome (TDS) none can see where this kneejerk reaction to utterly oppose anything Trump does is leading?

The only thing that might keep this resolution from becoming the blade by which Pelosi and Democrats commit election year seppuku is a relentless press corps that has crossed the Rubicon in support of the left and has attached the future of the media to the lodestar of the Democrat party. Although Americans trust the media less with every passing day, a unanimous media voice, no matter how legally and practically wrong, might convince Americans that the Democrats are making sense. But even that might not be enough to stop this from snowballing into electoral Armageddon for Pelosi and the left.

— Calling Trump’s targeting of Soleimani disproportionate is the same as saying, outright, that the murder of Americans at the hands of Soleimani and the attack on our Embassy are to be tolerated with nothing more than an angry letter or two. A smart advertising exec might start running campaign ads pointing out that this is siding with mad mullahs of Iran over the United States. Somehow, I doubt that will play to Democrat’s benefit anywhere outside of the fever swamps at Berkeley.

— As to safety, most Americans could imagine no greater threat to this nation than a nuclear armed Iran.  But citing for the need to go back to the Iran Deal is problematic.  Nothing in the Iran Deal prevents Iran from amassing a nuclear arsenal immediately upon the conclusion of the deal in ten years.  There is a reason Obama did not dare admit to his plans to put Iran on a glide path to a nuclear arsenal in the 2008 to 2012 election campaigns, when, to the contrary, he postured by saying he would never allow Iran to have a nuclear weapon, even if it meant the use of force.

—  As to Pelosi’s claim that Trump has no plan going forward, if Trump was unable to state his plan in one to two simple sentences, that might be effective. But the first thing Trump said today is that he will never let Iran have a nuclear weapon on his watch. Period. To that, Trump added that he would never let Iran kill another American without paying a heavy price. Those will sound like incredibly effective plans to all Americans who are not holding their fingers in their ears and stamping their feet.

— As to being reckless, to the contrary, Trump won the showdown with Iran. There is no WWIII and Iran, at the cost of zero American lives, has been humiliated and cut to size.  Continued Democrat fear-mongering on this issue by calling Trump “reckless” is going to ring completely hollow with anyone not already in the pitch blackness of TDS. It will only serve to show just how decisive and accurate Trump was for targeting Soleimani. He was not reckless; it was the Democrats who were craven.

— Lastly, one of Newt Gingrich’s laments, looking back on his time as Speaker, was that he made the mistake of trying to govern the nation from the House. Nancy Pelosi is doing that in spades, and not just on this issue. That said, as to this issue, Congress has the authority to declare war, but it does not have a right to declare that the President cannot take actions against threats without first seeking Congressional approval. It smacks of overreach and trying to undo the 2016 election by fiat.

None of that will stop Crazy Nancy tomorrow from fixing bayonets and charging. The only questions are will the rest of the left follow her, and what price they will pay for it.