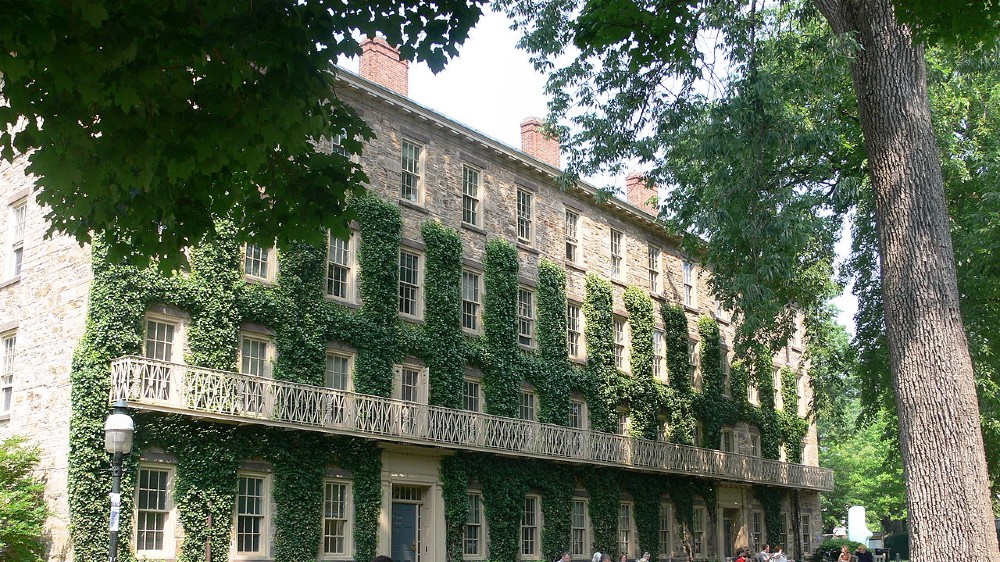 The Ivy League and other institutions of higher ed propagate ideas as destructive to America as the pernicious ivy plant is to a garden or home.

I spent several hours today rooting out ivy from the planting bed by my front door. I am exhausted because ivy is a very difficult plant. Here’s its life trajectory:

If you keep ivy in a pot in your house, it’s a pretty little plant that doesn’t cause much mischief. You have to trim it back regularly but it’s otherwise quite decorative. See how sweet that little ivy is?

The problem begins if you let that sweet little plant out of the pot and into your garden, as a previous owner of my house apparently did. Once outside, it grows uncontrollably. Worse, it doesn’t stay in one place, where you can uproot it if you don’t like it. Instead, it sends out shoots everywhere. Worse, each of these shoots produces roots that dig into the ground and give birth to other tendrils. It climbs up trees and digs down into the root systems of your smaller bushes and ground cover plants, where it wraps itself around the roots. The only way to kill the ivy is to kill those plants.

Ivy will also insinuate itself into your doors and windows, your vents, and your shutters. It will climb your walls, destroy your grout, pull down your bricks and siding, tear down your gutters, and generally wreak havoc everywhere it can go. All the while, the leaves continue to have that pretty, decorative ivy look. Even as it’s destroying everything it touches, it manages to look attractive.

In addition, every tendril has a gazillion roots and the vines have a habit of breaking off just as you think you’re about to pull a whole root system out successfully. Thus, no matter how much you manage to destroy above ground, you know you’ve left more vines and roots underground where they are unreachable. This means that it’s virtually impossible ever to rid yourself of ivy. All that you can do is maintain vigilance and attack it when even a single leaf appears anywhere.

It occurred to me today as I was struggling with the ivy destroying my planting beds, trying to tear down my bricks and gutters, strangling my other plants, and resisting my best efforts to track down every root and tendril that there is no difference between ivy and American socialism.

If socialists are confined to urban cocktail parties and a few university faculty lounges, they can be innocuous and even decorative and interesting. However, once you set them free, they destroy everything they touch.

On the surface, they might be grandmotherly figures like Elizabeth Warren (if you like nagging, pushy grandmothers), or perky little boys like Pete Buttigieg, or funny, crazy uncles like Bernie, but underneath they’re putting out tendrils that swamp and destroy everything. They entangle themselves in America’s institutions and eventually destroy them.

Moreover, you cannot simply destroy them root and branch. No matter the efforts you make to destroy leftism, whether in academia, the media, entertainment, or anywhere else, it keeps putting down those roots and shooting out those tendrils. The Soviet Union and East Germany may fall, but socialism just digs in elsewhere.

In America, the primary place in which socialism rooted itself has been academia. For sixty years, academia has been producing young socialists who, like ivy tendrils, spread out from the various academic mother roots and entwine themselves in American institutions. They look all bright and perky, as junior executives or fresh young reporters or new professors or teachers, but underneath they are working hard to pull down the institutions that currently prop them up.

With this in mind, it seems appropriate that America’s oldest and most famous institutions, all of which have become bastions of leftist indoctrination in America, are called “the Ivy League.” Sure, the ivy vining up their walls looks pretty (the picture above is from Princeton), but that ivy is just as destructive on the outside of the buildings as the academics’ and administrators’ ideas are destructive on the inside.

I’ll say again what I’ve said a hundred times or more before: It’s time for the federal government to withdraw every single penny of federal taxpayer money from America’s colleges and universities, including government-backed student loans. In other words, we need to do the opposite of what every Democrat and communist politician is advocating. For obvious reasons, they want more money in higher education, essentially fertilizing the socialism they spread throughout America, an idea as pernicious to our nation as ivy is to a garden and home.