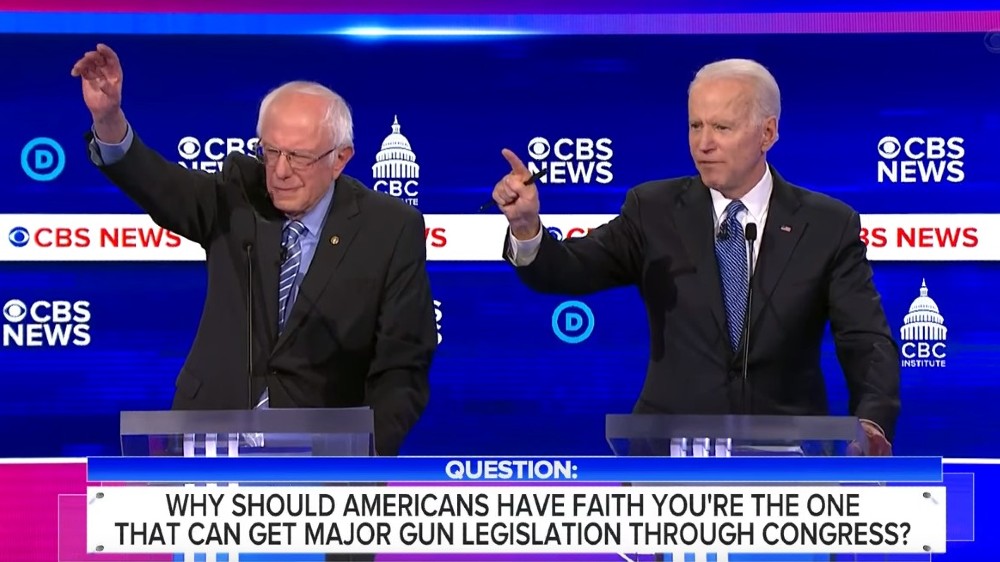 Having thought about Super Tuesday’s results, it seems to me those who say Biden is a shoo-in are mistaken. There’s still life in Bernie’s campaign.

With Biden’s unexpectedly strong showing after Super Tuesday, establishment Democrats are congratulating themselves that they dodged a bullet. They believe that Bernie’s momentum is dead. I’m not so sure.

As matters stand now, Biden has 627 delegates and Bernie has 551, a difference of only 76 delegates. Elizabeth Warren, who dropped out today, has 64 delegates. As Trump has pointed out, she’s Bernie’s ideological clone, except that she’s the schoolmarmish leftist rather than the crazy uncle leftist. Had she dropped out before Super Tuesday, as Klobuchar and Buttigieg did, it’s reasonable to believe that the delegates she received would have gone to Bernie making the race between Biden and Bernie even closer. Now that she’s gone, in future primaries there’ll be more unattached leftists to cast votes for Bernie.

There’s also something important to note about the upcoming primaries: They’re not in the south. The south can breed some pretty extreme leftists, of course, but southerners are generally more conservative. Therefore, it makes sense that their Democrat voters will be a bit more conservative than Democrats in, say, Michigan. Democrat primaries have yet to be held in, among other states, Michigan, Washington, Arizona, Illinois, Ohio, Alaska, Hawaii, Louisiana, Wyoming, Wisconsin, Connecticut, Delaware, Maryland, New York, Pennsylvania, Rhode Island, Oregon, New Jersey, the District of Columbia, and New Mexico, all states that may have a more radical contingent of Democrats than Texas or Arkansas.

Trends and momentum matter, so Joe may be seen as the winner now, with everyone hastening to back him. However, he’s a terrible candidate: corrupt, dishonest, stupid, vicious, and manifestly senile. He’s also ideologically wish-washy. It is true that he’s a committed Democrat, which means he’ll always stay on that side of the aisle. The reality, though, is that he’ll say anything to win.

Bernie is corrupt and dishonest too. At the top level, he’s corrupt and dishonest because he tells people socialism/communism will make their lives better. That’s a corruption of the soul and/or a dishonest lust for power. Even if one assumes Bernie believes his own crap, though, he has proven to be a gross hypocrite with his millions of dollars, three very nice houses, and private jets. Once he got rich, he stopped attacking millionaires and started going after billionaires. In other words, Bernie’s principles are no better than, and really much worse than, everyone else’s.

Still, despite being corrupt both deeply and superficially, Bernie’s being sold as an honest guy because he’s held onto his love of communism from the cradle. He’s also, quite disgustingly, taken to marketing himself as a Jew, even though Bernie has never had time for Judaism and is as hostile to Israel as the anti-Semites with whom he surrounds himself (Ilhan Omar, Linda Sarsour, and Rashida Tlaib, to name a few). That too is a sign of moral corruption and dishonesty:

I would be very proud to be the first Jewish president. Together, we will counter the hatred and bigotry of the Trump administration. Thank you @jewsforbernie for standing with us. pic.twitter.com/dznfwQEYsU

Watching this video, one is sadly reminded that Jews’ reputation for intelligence is highly overrated. These people are dumber than rocks.

All of which is to say that I don’t think the primary is over until it’s over. Neither Bernie nor Biden is a sure thing. If we’re very lucky, they’ll stay neck and neck right up until a brokered convention. Frankly, I can’t think of anything more fun than watching a brokered Democrat Party convention. While other people are hoarding toilet paper, I’ll be hoarding popcorn.