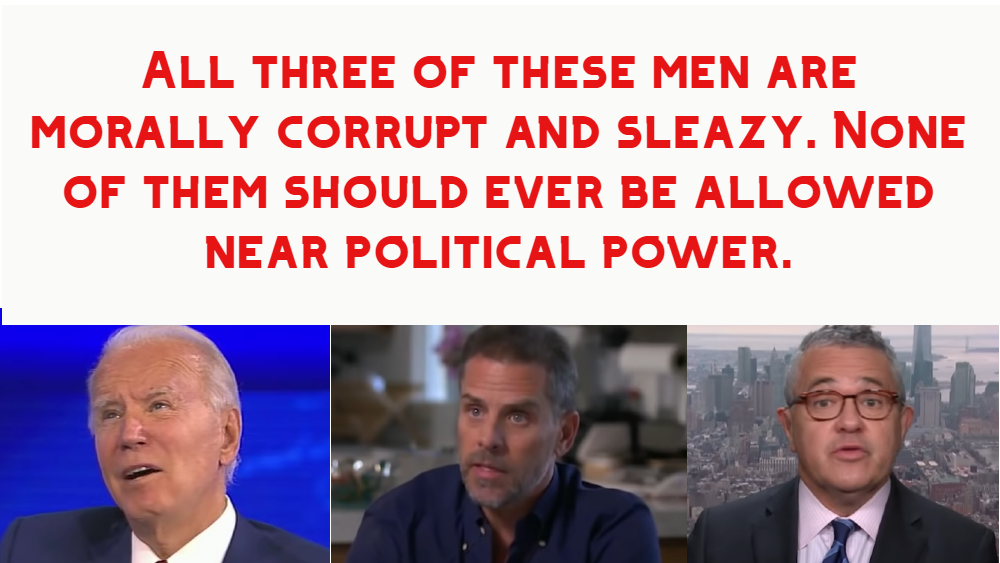 We are in the third act of an epic morality play, and the Bidens and their ally Toobin stand exposed as corrupt, sexually perverse people.

Starting with the 2016 election, Scott Adams said that Donald Trump is the ultimate showman, and that he understands how to create a narrative. Adams is correct and I knew that, in 2020, it was always going to be Trump who controlled the October surprise. After all, since they subjected Trump to a daily colonoscopy for the last four years, the Democrats have no arrows left in their quiver.

Even the Wuhan virus is proving to be a failure when it comes to destroying Trump. The economy is rebounding; voters understand that China, not Trump, is to blame; Americans have been repulsed by the Democrats’ embrace of covid despotism, and Trump’s own bout with the virus shows that we’re coming to the end of the pandemic.

Additionally, as Americans watch Europe again collapse under the weight of the virus, despite ostensibly doing everything right compared to Trump’s doing everything wrong, they’re realizing that, in fact, Trump didn’t do anything terribly wrong. He responded swiftly to events based on the best information available. No matter how one approaches the Wuhan virus, some people (sadly) will die.

When it came to whichever Democrat primary candidate became the Democrat presidential candidate, I always assumed that Trump would be able to pull a rabbit out of his hat. I also assumed, once Biden was the anointed one, that there would be lots of rabbits. When I envisioned those rabbits, though, I imagined that they would have Russian accents.

Thus, I had faith that, despite the Democrats using the Wuhan virus to slow down the Durham investigation, there would still be red meat regarding Biden’s involvement in the Russia hoax. Even when I learned that Durham would say nothing before the election, I told myself, “That’s okay. He probably can’t get a D.C. Grand Jury to indict anyone. And if he can get a D.C. Grand Jury to indict, it’ll be a year, at least, before there’s a trial. And in that year, all that the media will show are statements from the defendants’ attorneys saying that they’re innocent. I’m sure that Trump’s plan is to put the documents before the American people and let them make up their minds.”

What I hadn’t seen coming down the pike was Hunter Biden’s computer. Indeed, how could anyone have imagined that Hunter Biden would drunkenly abandon his computer at a little repair store; that the owner, after taking legal possession, would investigate the contents; that Deep State agencies would rebuff the owner’s efforts to turn over the contents to the government; that the FBI, having ignored evidence of Joe Biden’s corruption, would eventually send one of its child sexual exploitation experts to check things out; or that The New York Post, Rudy Giuliani, and Steve Bannon, would end up being the ones taking the story public.

And even if I had been able to imagine all of that, I would not have been able to imagine that the Biden camp would be unable to refute the hard drive’s contents; that Hunter Biden’s former partner, rotting in prison, would turn over his entire email account to Peter Schweizer; or that the Ukrainian government would have seized a computer from a Ukrainian bad guy with corroborating emails.

The only thing I knew would happen was that, the moment something bad about Biden emerged, the media and the Democrat party (but I repeat myself), would instantly blame “Russian disinformation.”

Frankly, Hunter Biden’s hard drive has been the most amazing denouement possible to the drama of the first term of the Trump presidency. I’m hoping that, during the debate, no matter what question the biased “mediator” asks Trump, he begins his answer by turning to Biden and asking him something about the evidence on the hard drive, whether it’s about Ukraine, China, or whether Biden knew about his son’s sexual activities with little girls (assuming that kind of stuff is indeed on the computer). And the follow up is that Biden, if he knew about all this stuff, also understood that this knowledge meant he was ripe for blackmail by China, Ukraine, Russia, and God alone knows what other bad actors in the world.

Indeed, if he’s feeling frisky, perhaps Trump can even ask Biden if Hunter got his taste for little girls from watching his Daddy. Then, and only then, should Trump answer the question asked of him.

As is so often the case, I can’t think of a better analysis of what’s going on than Tucker Carlson’s opening monologue. (If the video doesn’t show, you can watch it here.):

And while we’re on the subject of the media acting as Joe Biden’s praetorian guard, USA Today, which publishes a weekly column from Glenn Reynolds, refused to publish this week’s column. Please go to Instapundit and read what USA Today censored.

All of the above news about Biden is excellent (although the censorship is evil). But there’s news today that’s truly delightful, that’s the icing on the cake and the gilding on the lily. That news is that Jeffrey Toobin exposed himself during a Zoom meeting with staff from The New Yorker.

Why is this so lovely? Because Toobin is a bad man. He’s a bad man because he puts bad ideas out there and has done so since he sparked the second coming of modern American racism by writing in The New Yorker about the “race card” regarding O.J. Simpson’s trial. I truly believe that, had Toobin not written the article, the race issue might have come up as a defense, but it would never have overtaken the national consciousness as it did.

Toobin is also a bad man because he’s an intellectually dishonest man. He writes about the law like a sleazy lawyer, pouring misinformation and misunderstandings into credulous readers’ brains.

Toobin is a bad man because, while he was married, he had an affair with a colleague’s much younger daughter, impregnated her, and tried to force her to have an abortion. That is what a moral reprobate does.

Toobin is a bad man because, despite all his moral and intellectual failings, he believes he’s some sort of moral arbiter and, therefore, was one of the most hysterical anti-Trump critics over the past few years.

And that’s why it’s such a wonderful thing to see Toobin done in by his own sleazy badness.

This wonderful Seinfeld clip is perfectly appropriate to Toobin’s conduct:

(Hat tip: Instapundit, where you’ll find a whole bunch of other Toobin material.)

Incidentally, if you’re wondering why all of this is happening to Biden and those around him, there are two reasons. The first reason is that power corrupts and absolute power corrupts absolutely. Biden and his family have lived within a completely protected bubble for decades. They have no sense at all of limitations on their behavior.

The second reason things like this are getting exposed is because leftists are their own Gods. Even people like Joe, who pretend to be Catholic (never mind his support for abortion, gay marriage, transgenderism, and fondling little girls) don’t really believe in an all powerful moral arbiter. They are all their own gods. That’s why they think we puny mortals can control the entire earth’s climate, with no help from the sun. We can certainly pollute and destroy regions, but we are not gods. Once you jettison the moral God and create your own standards, you can expect more stories of depravity, debauchery, and corruption.

(If you’re wondering about why I said all three are sexually perverse, I don’t need to have the Biden hard drive to support this statement. Toobin proved it with the affair and with his Zoom moment. Biden is constantly fondling and sniffing little girls. And Hunter has a predilection for hookers, strippers, and widows. They are nasty, nasty men.)

Welcome, Lucianne readers and Rush Limbaugh listeners! In addition to writing here, I also publish under my own name, Andrea Widburg, at American Thinker.

One more thing, I’m completely charmed that Rush thought I’m a devout Catholic, because I have a great respect for the Church and its history. In fact, though, I’m Jewish. I’m not even traditionally religious. I’m just deeply committed and indebted to the important civilizing effect of the Torah, the rest of the Jewish Bible, and the New Testament.