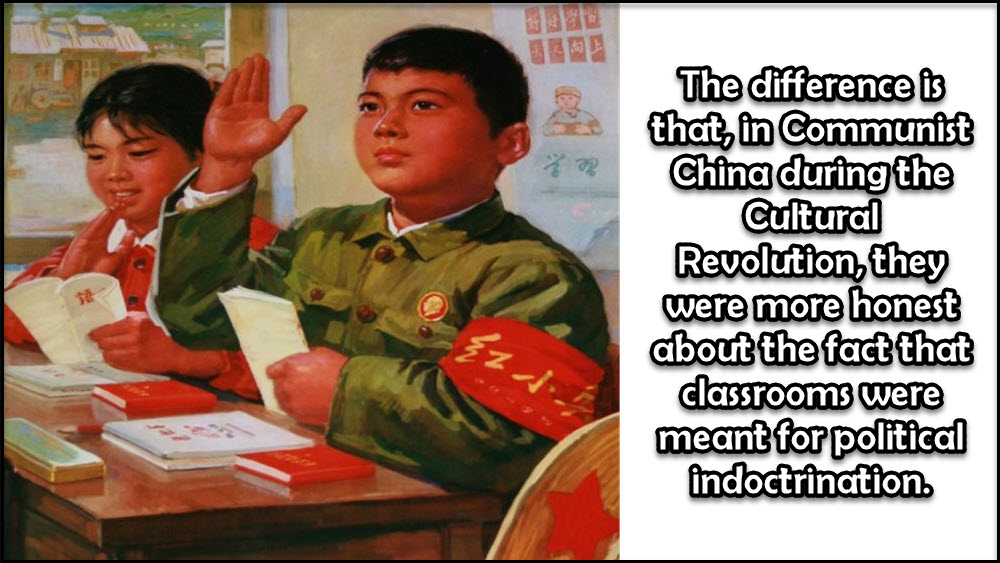 A random worksheet in an 8th-grade public school classroom highlights the non-stop leftist indoctrination our children receive in school.

A friend of mine found himself in a public school 8th-grade classroom. The students had been doing a project that called upon them to identify what constitutes a hero. To help them, the teacher had prepared a list of people that the students could denominate as heroes or not. What’s striking about the list is that, of the 24 names, 15 are leftists. I’ve marked the leftists with frowny faces. The others are either historic figures who are not considered overtly political or they fall outside of the modern political rubric:

Abraham Lincoln: A Republican, but most young leftists think he was a Democrat. Also, young leftists are being taught that the slaves freed themselves. The Civil War was kind of irrelevant, I guess.

Our Neighborhood Firefighters: Again, outside of the political rubric.

Ellen Degeneres: Leftist lesbian entertainer — although props to her for having a friendship with George W. Bush, who may be a disgrace to the Republican Party but who is still Republican enough to have caused her to get massive grief from the leftist establishment.

Harriet Tubman: A great woman and pro-gun advocate who was a Republican. Leftist education ignores all attributes other than her skin color.

Bruce Jenner: A Republican but anomalous because he thinks he’s a woman, putting him into a leftist protected class. (Although now that he’s announced as a Republican candidate for California governor, the leftists’ long knives have come out for him — and is it a bad pun to use “long knives” in connection with a man who may or may not have emasculated himself?)

John Muir: Early environmentalist, a cause leftists insist is theirs.

U.S. Soldiers serving overseas: Anomalous. (And while I’ve deleted the student’s name and answers, I found it interesting that he did not find these people to be heroic, but Beyonce was a hero.)

JK Rowling: Leftist author although, to her credit, she’s stood up to the nonsense that so-called “transgender” men are actually women and should be treated that way.

Albert Einstein: Historic figure who is not associated with a party.

Elon Musk: A somewhat shady, but still true visionary who is kind of a lefty libertarian.

I have nothing more to say. We conservatives may already have lost the window of time within which to push back against the non-stop indoctrination leftist have force-fed American youth.