Some lessons seem almost impossible to learn in the abstract.  Even if we know the hard truth, until it has an impact upon our own lives, we go merrily along, assuming that the worst will never happen and that, if it does, we’ll muddle through somehow.

I’ve known a couple of people who awoke to find their homes on fire.  Both had exactly the same response:  “This can’t be happening to me.”  They were wrong.  It was happening to them and both ended up losing everything to the fire.  The fire also exerted profound behavioral control over them.  Neither would ever again sleep in the buff.  Both had fire extinguishers in every room.  And both vowed never again to get too attached to possessions, since they were, ultimately, so ephemeral.

Experience is a good teacher.

Sadly, though, Jews as individuals, rather than as a collective, especially American Jews, have learned few lessons from the past.  Like the German Jews before them, they think “It can’t happen here.”  And like the true Leftists they are, they think the only safe repository for weapons is the state — forgetting entirely that it was the German state that used those same weapons for genocide on a hitherto unknown scale.

All of which leads me to Robert Avrech’s autobiographical essay about life in Los Angeles during the 1992 riots.  As Robert mentions in his essay, he had been in Israel during the Yom Kippur War, so he knew that it could happen (including know that children are always a terrorist’s first soft target).  But until the 1992 riots, he had never fully appreciated that it could happen here.

Moreover, when it happened, it didn’t just have to be them against the Jews, which seems to be the only historic lesson Jews will ever contemplate. It could be them against whoever and whatever you are.  In 1992, it was them against whites and Koreans and, as is always the case when riots take hold, the rioters also manage to destroy the weakest and most vulnerable in their own communities.

The riots also brought another lesson home to Robert:  when all Hell breaks loose, the statistical likelihood is that the police will not be there to protect you.  What few people remember until it’s too late is that the police are a peace-time entity.  They are not equipped to deal with vast uprisings.  That’s an army’s responsibility.  But in America, the military isn’t going to be there instantly either.  It takes time for the President to mobilize the National Guard, assuming he even decides that a particular riot merits that response.  So, with police disabled and the military absent, you are on your own. 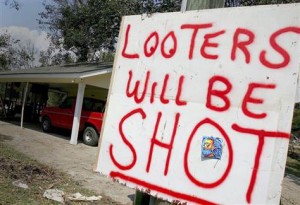 I figured this one out, not after the L.A. riots, but after Hurricane Katrina.  Despite the savagery of the media’s knee-jerk attack against George Bush, the fact is that it was completely obvious from Day 1 that no government entity could aid all people at all the times.  The only ones who were assured of a modicum of safety against looters were those sitting on their porches with a rifle or semi-automatic in their lap.

Robert’s essay is delightful (he’s a professional screenwriter, so he really knows how to tell a tale), but it’s also a reminder:  It can happen here, whatever it happens to be.  It could be a pogrom, a Holocaust, a race riot, Zombies, etc.  You could be under attack because you’re white, black, Jewish, Asian, Hispanic, short, tall, rich, or poor.  It could happen spontaneously or because of a natural disaster.  The one thing we know with absolutely certainty is that, if it does happen, if you’re unarmed, you’re helpless.  Dumb luck might see you out of the line of fire or within the ambit of police protection but, without that luck . . . . 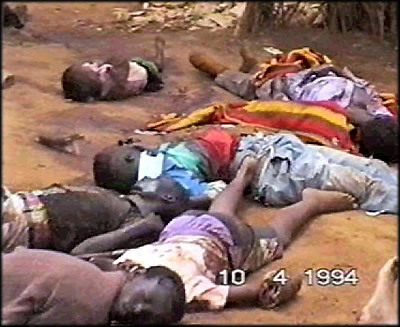